This Saturday I’ll be recording a live performance of a piano recital on a grand piano. Does anyone have advice on the best mic technique(s) for this task? I’ve never recorded piano before so this is totally new territory for me. Thanks in advance.

I have a grand piano that I mic all the time in my studio. The micing technique will really depend on what you are looking for. In this instance, you will likely be wanting it to basically sound like it does in the room. I am a fan of an ORTF pattern over the strings at about the middle C position. Closer to the hammers gets you more attack. Further to the end of the strings gets you less attack. I typically use a pair of SM-81’s for this. Sm-57’s are surprisingly good. As a second option, I will use a spaced pair. One in the middle of the low keys and one in the middle of the high keys. I will have them over the non-hammer end buy the curved part of the body of the piano aiming over the strings towards the hammers. Taking a room mic about 6-10 feet back can also be very useful.

I hope this helps

I would use this:

I’d find a discrete place to park it, screw it to a tripod and call it a day. Maybe a stereo pair of 81’s 3 feet back from the soundboard if the lid is open. When I record with the orchestra we use an earthworks mic but those are pretty pricey if you’re the one who has to provide it.

@Paul999: Thanks. I have several SM57s so I’ll use a pair of those with that pattern. It’ll give me an excuse to buy a mic bar. lol

@Jonathan: Thanks. I have something similar to this so I’ll find a place for it. Good idea.

@bozmillar: I’m capturing my cousin’s piano recital for her college class. I’m not sure exactly how much “stuff” I’ll be able to put out. One thing I am also thinking of doing is setting out a couple condenser mics printed at the audience to get crowd noise/applause.

Put your best condenser mic in the curve of the piano (pointed toward the strings). Put your next best pair of mics as a stereo configuration of your choice. Use the 57’s for the audience.

The top two tracks are the SM57s in the ORTF configuration. The bottom track is the condenser in the curve of the piano pointed at the strings. I set out an external recorder but I won’t be using it because it picked up a couple of my chatty aunts. lol

I’ll be mixing this in Cubase. I just pulled it into Audacity to give it a quick listen. 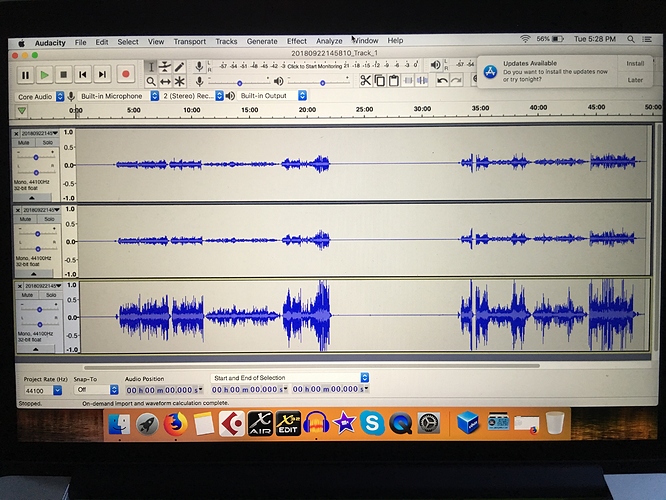 HOw does it sound?

It sounds good. When I originally looked at the WAV files, I thought that the track with the condenser mic might cause digital clipping but it doesn’t. As an added bonus, the condenser mic did a GREAT JOB of picking up the applause.

If anyone is curious, the piano is a Baldwin.