I am seeing this error on startup of Reaper: 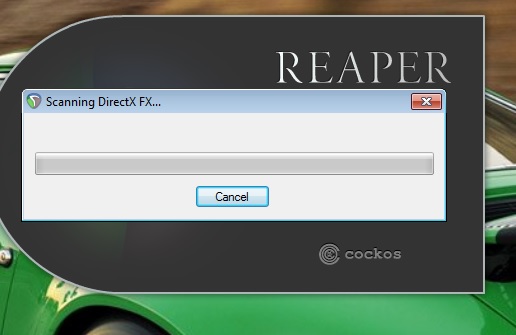 It just sits there, can’t get out of it.

Also couldn’t find any fix from what I’ve seen on Reaper forums.

I am thinking that possibly there might be some kind of startup.ini file that this value could be overwritten. I rather not reinstall again as it will probably break up all my validated software and I have to re-register. This changed recently though, as I have no idea why. Possibly after I installed the latest Cakewalk by Bandlab (Sonar).

Certain plugins will crash my Reaper and I also got the Bandlab Sonar which came with some DXi plugs that got put into the Cakewalk plugin folder.

If the Reaper scan path for plugs is looking at the Cakewalk folders that could be a problem?

you should be able to disable scanning of DirectX fx. That is, assuming you can find a way to open Reaper up far enough to get to that option.

That’s exactly the problem, it won’t open far enough to disable it.

Now, when something like that froze in Cakewalk, you could overwrite some kind of startup file that usually did the trick.

What I do is go to the plugin folder and move the trouble maker to another folder (desktop) so that I can get back into Reaper and then adjust the path for scans ( or maybe give up on the bad plug.)

You might have to move all the DXi ; but that’s not hard to do.

DX (Windows Direct X) plugins don’t rely on scan paths, but on registry entries.
You may have a incompatible plugin installed and it is hanging the DX scan.

Here’s a link to a freeware DX manager that allows you to disable/remove DX plugins and that may help you progress:
VB Plugin Manager

It has to be dodgy DirectX that came from Cakewalk, my Sony Video editor won’t open either, scanning same places

Did you try to de-install things you installed just before it began? Just un idea

Don’t want to break anything else as I am in the middle of finishin up recording session. When I am done I’ll try to reinstall Reaper, but Reaper is not essential to my wrokflow, just wanted to test its noise removal plugins.

Don’t want to break anything else as I am in the middle of finishin up recording session. When I am done I’ll try to reinstall Reaper, but Reaper is not essential to my wrokflow, just wanted to test its noise removal plugins.

Just curious, did you try my suggestion?

I don’t even know where to look for these direct x plugins which I am assuming are conking out. From what I understand they are installed with registry hooks. Sounds like a valid idea though.

I don’t even know where to look for these direct x plugins which I am assuming are conking out. From what I understand they are installed with registry hooks. Sounds like a valid idea though.

On my set up Cakewalk Sonar has some DXi plugs which you can see by opening Sonar and going to Utilities > Cakewalk Plugin manager > DirectX effects.

On my set up I can run some of these in Reaper by including them in the Reaper plugin folder. Maybe by comparing the two folders you can find the problem.

Here’s a screen clip of the VB Plugin Manager freeware that I have linked above:

It will scan your Windows registry and display all of the installed DX plugins and also allow you to disable/remove the plugin.

You can disable a suspected plugin and restart Reaper to see if it fixes your problem.
If not, then use it to enable the plugin and move on to the next suspect. 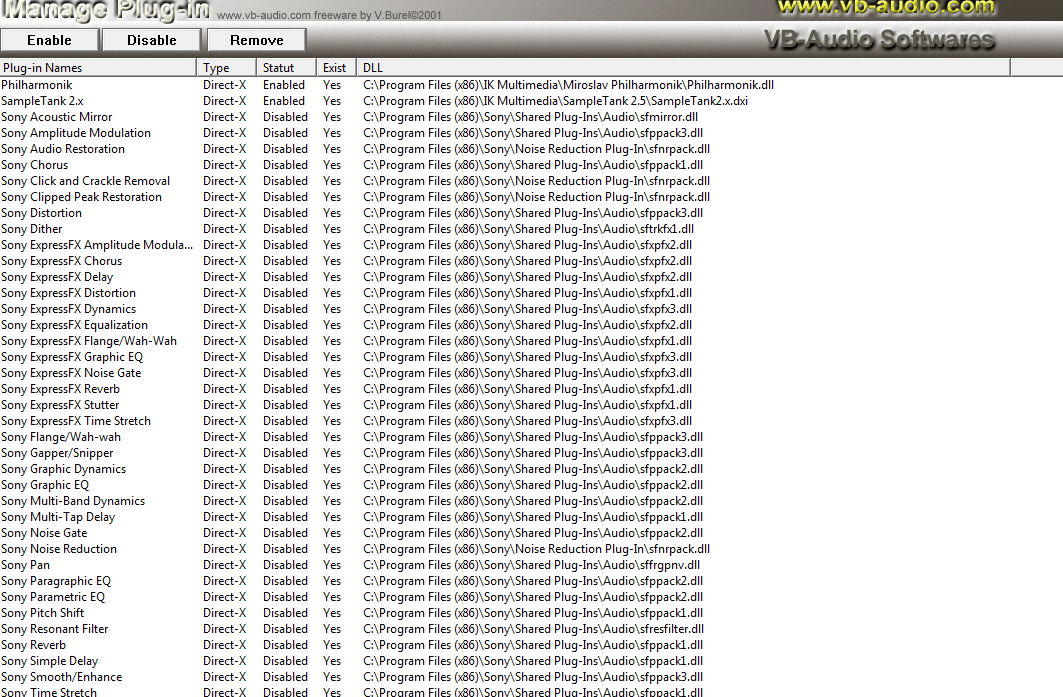 all Sony but these 2, I don’t think these are the culprit as I installed these way before and Reaper ran ok

If they were installed prior to the Reaper problem, then they are most likely not the problem.
Tracing down problems on a Windows system can be a painful process.

You said you had installed Sonar, I don’t see the Sonar DXi plugs there. They should say Cakewalk or Sonitus, is there another page?

Nah, I don’t think so. I was surprised too.

OK, I’ll try Reaper reinstall to newer and see what happens. Will report back.

OK, fixed it on an advice from a guy on another forum. The Reaper folder in the Start menu of WIn7 has a “Reaper-Show audio configuration on startup” option, that seemed to flush whatever was going on.
Super weird…

Strange solution, but glad to hear you got it running.
It must have flushed out some cache files and reset the DX scanner.