This thing was in the rack mounted redundancy failsafe switch that connects both of my mixing consoles together. It died a few weeks ago. The system diagnostics in the mixers computer told me it was a bad. I had a spare one sitting around so I plugged it in and it worked. I need to order some more.

This is a really really noob question but I’m not sure what to buy. Is all PC100 100Mhz 256MB Ram the same? Are those the only 3 numbers I have to worry about when picking a chip? I looked on Ebay and saw some chips (for desktop) that said PC100 256MB but they don’t look the same.

Could someone do me a really really huge favor and copy paste an exact link to somewhere I can buy these…weather its NewEgg or Ebay or Amazon? I have no idea if one brand is better than another. I was wanting to buy several of these brand new in box if I can because I think I need them in my preamps too.

This should be what you want. It looks like two 256MB sticks so you should be good to go. 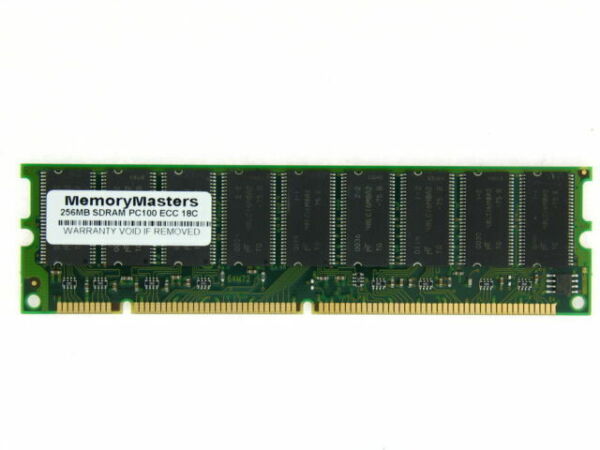 Find many great new & used options and get the best deals for 256mb SDRAM Pc100 ECC Unbuffered DIMM 168pin 18 Chip at the best online prices at eBay! Free shipping for many products!

A good trick for ordering RAM for anything is to look at the old modules, and find any number with PC before it. In this case it’s a PC-100-222-620 module. If you enter that whole sequence into Google, and then make sure you put the size (256MB), the results you get are 99.9% correct.

I started having repeat freezes on my windows and it was RAM.
Im down a stick but the freezing stopped. Someone mentioned if you try they’ll replace the stick for free sometimes. “life time warranty” thing…

some say to do preventative maintenance, blow the dust out, put new heatsink paste on the cpu, blow the fans out…replace the RAM…backup hard drive and have a spare ready.

Luckily the dead RAM cells …seems to be the least of the worst?