Put out an album over the weekend

I had some really practical and useful feedback from this place when I was mixing the single I’ve put out from this album, so if anyone’s interested, the album the single belongs to was released over the weekend.

I struggled about whether or not I’d actually say what it’s all about, because unlike my last project which was about the refugee crisis, so I could talk about that, a lot of what makes this one tick is more personal - a failed pregnancy my wife had last year, mixed in with a bit about how sucky a lot of the world has felt for the last few years.

EXCELLENT production aside, what really impresses me with your stuff is that it sounds like a band - not one guy doing all of this. Really well done! Congrats!

If you need some Yngwie Malmsteen leads in there, hit me up

So @Cirrus did you do all yourself? Drums, bass, synths, guitars, vocals?

a lot of what makes this one tick is more personal

Sounding good to my ears, and very interesting musically. I did get a sense of the personal depth on it too. Great work!

did you do all yourself? Drums, bass, synths, guitars, vocals?

Yeah. I was recording/ playing drums last March for an album I was producing. My band was falling apart at the time so I had the rehearsal space to myself for about 3 weeks solid, drum kit and recording setup primed and waiting. That meant as well as the 12 tracks worth of drums for that project, which I’d been rehearsing for a couple of months and was able to knock out in one long weekend + a couple of evenings after work, I also had time to play around and write/ record the drum parts to go on a load of demos that were going to be for my failing band - I’d got as far as doing tempo mapped acoustic guitar + vocal recordings of them, so I added the drums to those session files and went from there.

Then I DI’d the bass parts at home over the next few weeks, and re-amped the resulting DI tracks at the rehearsal room through my bassist’s Ampeg Stack.

Through this part of the process my wife was pregnant and I was doing this thinking it might be my last chance in a long time to focus so fully on a project like this.

By the time I was recording the guitars (via Line 6’s Helix) & vocals at home, the band had folded, my wife wasn’t pregnant any more, and I didn’t have the rehearsal room or access to drums any more. So the place I was at the start of the project, and what had been inspiring the songs, changed quite significantly in the middle. That gave the songs quite a different light, so there were quite a few where I’d already recorded guitar parts and vocals where I ended up going back and re-framing them.

Something that was quite fun was roomifying the drums. The rehearsal room wasn’t bad but in typical band rehearsal studio style it had that thin carpet on the walls etc so it was a bit dead. I set up a PA system and played the drum recordings out into the foyer of my workplace one Saturday morning when I knew the building would be empty… I’ve just popped out to take this pic; 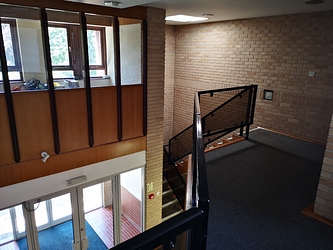 PA speakers were down below the blue carpeted overhanging balcony, mics were up in that corner near the top of the stairs. It was good fun, I’d do it again.

Awesome! Glad to hear you went to such lengths to keep things natural on drums and it does pay off. Probably could’ve popped in an impulse response of same room but you did it the good old way and it paid off, love the sound, everything. A+ (or as Brit would say) “Bang up Job mate!”

Probably could’ve popped in an impulse response of same room

Yeah, that would have been easier!

I wanted to get the distortion/ smear of the PA system pumping the drums out as well, after I read in Daniel Lanois’ book that he’d done it on the drums for a track from U2’s The Joshua Tree. But now I think about it, I really should have had a go at taking an impulse response for the whole shebang for later use!