To any Reaper geniuses out there: Michelle has been kind enough to provide me with two tracks to add to a project of mine. We used Dropbox to transfer files which worked fine. I listened to the tracks individually, and they play perfectly in pitch and tempo.
When I try to them import them using Insert/Media from the toolbar in Reaper, they are completely out of tune.
I started a new project and brought her tracks in, and they also play fine by themselves there, so I rendered them at the proper bit depth and brought them into the existing project, at which point they are out of whack again.
What should I be looking for?

I use Reaper but I’m far from adept, so I’ll probably just add to your problem.

When I did a track for your Father’s Day tune I had to set the bpm on Reaper to 124.25 to get the grid to line up with your track which seems kind of weird. So I’m wondering if my track lined up on your system?

And I seem to remember that @FluteCafe records at a higher bit depth, maybe that’s involved?

Thanks, I’ll check that out. Her tracks appear to be at the same bit rate. I have a feeling it might be a plug in conflict. When I get it figured out I’ll be ready for your track.

Hi, Reaper automatically converts the bitrate so this is not the issue here. Most likely your media item timebase is set by default to “beats” so Reaper stretches them. After importing your media items, double click them and select “time” as the timebase instead. Let us know if that works.

Bob PM’d me about this, and I sent him this answer (just in case anyone else has the same problem)

Hi Bob, this sort of thing usually has to do with the preferences in the media explorer. It should have “Tempo Match Off” as shown here, so that any metadata embedded in the supplied files about tempo or pitch doesn’t activate Reaper to change the imported file… It is usually something like that. 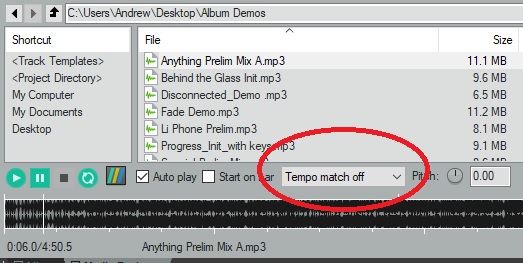 Not sure if that actually is the problem, but I have encountered it previously, so I thought it might be worth sharing.

so I rendered them at the proper bit depth and brought them into the existing project,

Just had another thought - check your render settings and make sure “Embed Tempo” is not switched on.

Embed tempo is off, Tempo match is off.

Have you bumped the “Playback Rate” control by any chance?

If you double click on the item to bring up the properties window, what does it say for the playback rate on the item?

Call off the dogs, the playback rate was bumped up to 1.09. I can import the project into a new project and get it fixed. Now I just need to figure out lining up the extra tracks.
Thanks everybody for all the help and suggestions. I may be stupid, but at least I’m dumb.
Michelle sent two nice violin tracks, and other than trying to line them up properly, I can make it work now.
I had a similar problem a while ago where a virtual instrument would play fine in the track but not after being rendered. This was a whole different level of inept on my part.

looking forward to hearing the course of production. Its a very nice composition indeed and your voice in this song is very close to Chris Cornell

For me, it looks like there is some streching switch on by default: I had this issue when I wanted to show Reaper to a friend, download the latest release (“that fast!”), and begin to play with this.
I’m curious about how Reaper see the file from its perspective: select the item that sounds off then press F2 (Media Item Properties).
“Playrate” should be 1.0000

they are completely out of tune

and if it’s at the wrong speed, it would be that.