Came up with the chords back in April, and let it marinade in my brain for a couple of months while I let some ideas for lyrics roll around. I had stumbled across the phrase “positively negative” somewhere along the line earlier this year and jotted it down as a nifty song title, and found a way to write something that worked with that.

One aspect in particular about which I would appreciate some input. I would like to take some steps to hold interest as the tune goes along, some kind of ear candy, but I’m kind of at a loss for how to do that (or whether it’s even really needed). Any suggestions most welcome-- does it need another instrument? Or maybe an EQ trick or a sudden shift in panning in the choruses? I need other ears on it…

Subject wise, the song is about those certain special kinds of people who always seem to need something to complain about… I’m sure we all know at least one such person.

Because the lyrics are pretty wordy and my diction may not be completely clear everywhere, I paste in the lyrics below.

As always, thanks for listening…

Excellent commentary on the drama triangle and narcissism.

Though I’m not sure about the genre influence, I think it kind of sounds Rockabilly a la Billy Burnette or something? The slapback delay on vocals gave that impression, and the doo-wop backing vocals.

I think overall this is on the bright side, given the prominence of guitars and up-front vocals. I think the kick drum and bass could come up a bit for more low end. With that style, they may be appropriate the way they are, but a modern audience listening might not realize that and want more ‘beef’.

The drums sound fairly robotic except during the fills. I think it’s mostly the hi-hat … it sounds too consistent. Maybe use some “humanizing” or vary the velocity of those hits for more realism.

The bass doesn’t sound very well defined, and I was struggling to hear it. Again, that may be style appropriate if this were produced in 1957, but for a modern audience it might help to sound a bit more punchy and defined. I think it would help the ‘groove’ of the song too. Put just a little touch of little Funk in it.

This song SOOOOO made me think of Donald Trump.

every line in that song was the story of his damn life! lol.

I have a couple ideas… brb…

This song SOOOOO made me think of Donald Trump.

every line in that song was the story of his damn life! lol.

Funny you should say that… it was not the intent when I started, at all. But yeah… there are major similarities between him and this species of troll…

Thanks Stan-- it’s pretty hilarious, because I spent the last hour before I posted dialing back what I perceived as the way overwhelming low end, bass and kick in particular. As always, my achilles’ heel is that low to low-mid region…

Hey CW This is fun. Reminds me slightly of Huey Lewis ish. The bgv’s are special. Love the fills and the sound. Yup my toe is tappin. Positively negative. How clever is that. Great writing and production bud

Such a cool song - particularly love the bop-do-wop backing vox… gorgeous.
Very nice geetar riffs coming on through… a classy groove! hehe
In bashland… I found the fx on the lead vox just a touch relentless… wondered about possibly having them for say a third of the song and then switching to a cleaner sound and then back to the fx version for the ending? I also wondered about introducing a little instrumental variation in the chorus - for example cutting the backing vox there and having some more sustained notes - hmmm I thought of sustained slightly cliche strings but a slightly cheesy organ sound could be great… just to add a little more variety to the production.

Things sound quite nice and tight within the mix for my ears and there are some very nice wordplays in the lyrics… a cool smile track for sure! Yay - those backing vox are so coolio!!

Instead of giving all kinds of comments on the audio…let me throw some production ideas at ya. There’s a lot of different ways you could bring the drums in. How attached are you to the pattern? To go with the retro 60’s theme, what do you think of this: 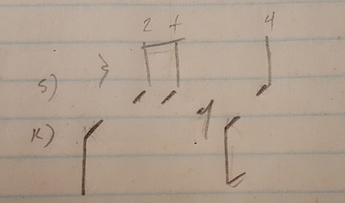 Then maybe add a stop the downbeat? For some excitement!

. . . . so put an accent on ‘sat’, let the vocal hang out on a ledge by itself, but have the rest of the instrumental stop. Pick up of course at the next phrase. I’d keep those 16th notes going into the 2nd part of the first verse.

The next thing I’d change is make the drumbeat different on the chorus. And then you could really make that chorus hit by changing the melody line of “y’know it aint my fault” 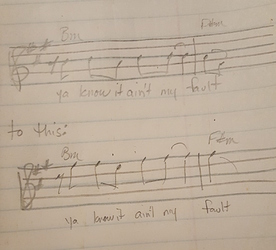 …that gives the melody somewhere climatic to go. So same timing, just take it up a 5th. The melody you have is a tad bland…even if you don’t jump it a 5th, maybe try moving a few notes so its just a hair catchier.

Then I think the words ‘own mind’ should get cut in half. So instead of four beats for each word, same notes, but own (2 beats) and mind (2 beats)

Very very good lyrics. I can’t write lyrics to save my life. And totally a fun song!!!

My song! Thank you.

Thanks for the feedback folks! Much appreciated.

Stan, your suggestions about the drums are likely to be rolled up in the kinds of ideas Jonathan has, which I’ll get to below. And clearly I need to work the low/low-mid region (as always)…

@Emma, regarding the lead vocal slapback effect, would it help if I just EQ’d the slapback send, make it darker so that it doesn’t slap the highs back as much? Definitely up for experimenting with that, and possibly having it come in and out as you suggest. And I like the ideas for helping add some variety to the chorus…

@Jonathan, many thanks for taking the time to give such detailed suggestions! That’s above and beyond the call of duty right there… Sadly, I don’t know how to read that drum notation, so I’m not exactly sure what you’re suggesting as an alternate-- but I am most definitely not married to the patterns I’m using now, and am happy to change things up. I really like the ideas about altering the meter and melody in the chorus too. Not sure I can hit a fifth higher on that one phrase – the reason all my vocal melodies are so bland is simply because my singing range is so narrow.

Nevertheless, I’m sure I can come up with something that sets the choruses apart more… these are just the kinds of suggestions I was hoping to get. Definite food for thought! Not sure how soon I’ll get more studio time at the moment; I have a crazy calendar this week and on Friday morning we’re off to Oregon to view the total eclipse on Monday, coming back home Weds of next week. That’ll give me some time to mull over some options…

I would suggest not only cutting back the slapback effect on the LV, but also perhaps integrating it into the sound of the instruments so there is some connection between them.

Overall I like the song, the structure is well balanced and feels good. I agree with CRS the vocals over ride the instruments somewhat (touch too loud) the presence effects could be attenuated just a bit.

Not to my ears I think your enunciation to be very well done. I always listen to how clear the vocals come out in a song, if a passage goes by and I drift away is because the vocals are mush. yours are GOOD.

Great tune and clever song writing. I really like the vibe, and the Huey Lewis comment is right on. Maybe listen to a couple of his tunes for comparison on where to go with the instrumentation.

I think bringing the drums and bass up would really get it grooving!

this is great work, but i dont like the saturation effect or reverb? on the vocals. they sound too muffled within the background for me.
backing vocals sound more 50-60`s pop and the lead vocal is too distant.
i think bring the lead vocal more in front and it will be much better and lead the song more.
great track though, like the ideas and lyrics. some great guitar.
infact a lot of good production techniques in this.
ending is great.

Cool song. The playing and timing is good. I’ll just touch on something that have been mentioned by others

You’ve written an excellent song Dave. As far as the mix goes, did you use a reference track?

Many thanks for all these excellent comments! Clearly I need to do something with the lead vox. Given some of @Jonathan’s suggestions, I’ll probably need to re-track the choruses as well. And the low end (bass & kick) need to be more prominent-- clear consensus on that too.

As far as the mix goes, did you use a reference track?

I am sheepish to admit that I have not on this one. Mea culpa, mea maxima culpa. A couple folks likened the sound to Huey Lewis, of whom I have never been a giant fan and so am unfamiliar with all but a couple of his hit songs. Perhaps the one Mike suggested would work. I will surely apply one or two as I revise though, and would be glad of any suggestions for good ref tracks to use for it.

I am going to try to get some progress on this before I leave for my trip on Friday if I can manage it… although I doubt I’ll have a rev to post until late next week or the following weekend. Stay tuned…

I am sheepish to admit that I have not on this one. Mea culpa, mea maxima culpa.

Yea, I mean, I could harp on about a load of stuff in the mix but really I think you need to get a nicely mixed and mastered commercial piece into your DAW and do some A/B comparisons, that would illustrate how far out you are on some elements. I think you’ve fallen off the wagon a bit. Nothing that can’t be fixed though.

Do you have the pro version of Mixcraft?

I think you’ve fallen off the wagon a bit. Nothing that can’t be fixed though.

Do you have the pro version of Mixcraft?

You are spot on Adrian… I have indeed fallen off that wagon these past several months. My excuse is that I’ve been working to readjust after getting my hearing aids a few months ago, which have changed how I listen, not surprisingly. Been working on the “Train Your Ears” module and trying to listen to lots of familiar music in my room to recalibrate.

Nevertheless, your point is right on the money.

And yep, I use v8 Pro Studio of Mixcraft. Been doing the Pro version since v6.