Hi folks, herewith my latest recording for your consideration.

The song is the old Badfinger chestnut, Day After Day, covered in a very spare arrangement with just me and a guitar. I’m a little nervous because there’s nowhere to hide on this one… the guitar is my Heritage 535 semi-hollow with a clean Amplitube sim, and that’s about it. Got inspired recently to do this one in this kind of stripped-down mode.

CW Very clean bud. I really like this song. ya put me in a good place. like the speed and ahh yes the harmony just kicked in. You are singing this very well. Gutsy, but it paid off. There is just something about a stripped down song where you can hear the vocal perfectly. I like that. When I go to places like walmart and hear a song over the PA I like, 90% of what is recognized is the vocal. I can’t fault anything here friend. I’m sure there are some good ears going to help you. Congrats

Wow Dave, really great job on the singing on this, I really like it! Yes it’s very sparse, stripped down, and naked from a performance standpoint. The vocal completely carries it though, very emotional and vulnerable, sounds very in-tune to me, and your vocal technique is maturing very nicely. Backing vox are very good too. Nice fade out. The song is unmistakable, but yet there’s no comparison to the original because it’s obvious you’re “making it your own”.

I almost felt a Neil Diamond kind of crooner vibe to this. I love Neil, one of my non-Rock/Metal idols, especially for singing.

Thank you Paul and Stan! I appreciate the kind words. And with just guitar and voice, not a whole lot of mixing to deal with, so there’s that.

I dig it. I could see this song ending up in my acoustic set. lol

Great job, your voice is right out there in the open, and you pull it off very, very well. I almost got in the car and drove over to Houston to put the slide part in, but your interpretation is great and stands on its own.

The only thing I heard would be to eq the guitar a little differently, it might benefit from a little top boost, and there may be a slight buildup in the low mids. None of that is critical. I just watched your interview, and I was kind of rooting for you as the song started, cuz I would be scared %^&tless trying to sing that song in such a sparse arrangement. Big stones and a good arrangement go a long way.

Really nice Dave - like the song and your rendition is nicely naked and really well and honestly performed.

Agree with the Neil Diamond vibe. Bash wise, no issues at all this end - it’s just solid and well delivered.

Depending on your taste, there is a potential lack of high end on the guitar but I get that tone requirement totally.
I think you could get away with a little more “ting” and note clarity - if you wanted, but as I said, not on my account certainly.

Well done on this one!

I remember this track Dave! Wow, this brings back memories…one of the very first songs I learned to play on electric guitar was the riff from Badfinger’s “No Matter What”! Then I heard “Come and Get It” and thought “that sounds like the Beatles”, only to find out that was probably because Paul McCartney wrote it!.. I digress…

Really nice interpretation of this track - A great lesson in “less is more”.

The only thing that struck me was the guitar tone. Again, mainly reductive eq is the trick here - cutting the muddiness to allow more clarity to show through. Here’s how I reckon it would work better:

I also added a boost around 3k - Here is what the eq looked like: 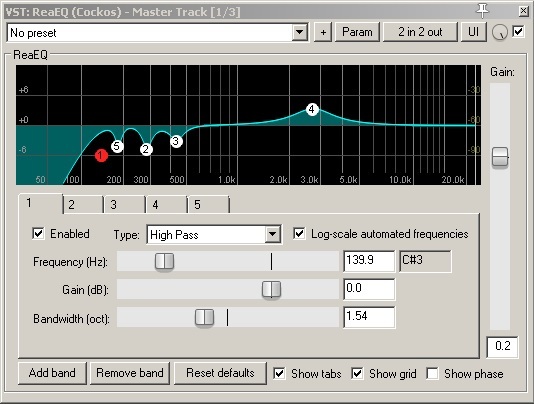 If it was me, I’d also compress the guitar a little bit, just to even things out a bit.

The vocal has a little nasal resonance around 4.9k that only pokes out on certain words and syllables. This is a case where a MB compressor just might help to tuck that in and smooth it over when it happens.

Thanks guys! And MANY thanks Andrew @ColdRoomStudio! I really appreciate the fully specific suggestions for the guitar EQ. I do like the darker sound that it has now, although several have mentioned wanting more high end in the guitar, so I’ll check that out.

This particular guitar always needs a lot of EQ at the low end, it just puts out a huge amount of energy down there. I already have a steep HPF on it, but as I recall I did back it off to a lower freq because I wanted there to be some substantial contribution down there in this bare-bones arrangement. But I didn’t institute any surgical cuts, so these suggestions are awesome-- I’m sure they’ll be a big help.

And here we go-- EQ similar to Andrew’s suggestion; not quite as much boost at the high freq though. Also swept out a small notch in the 5k vicinity of the vox to temper that nasality, and that made a nice difference too. Overall everything seems much smoother now. Thanks Andrew!

Hey there @Chordwainer, what a great voice!
I like what you did with the song, very simplistic and emotional, nice job.
On the technical side of things, I would agree with @ColdRoomStudio EQ wise, there are a few resonance buildups in the lower mid range that could be tamed the way he suggested it, but I like to tackle that problem a bit differently, using an dynamic EQ, because those nasty buildups don’t occur on every chord, and when you take out say 250Hz out of one, the other chord which does not have the same 250Hz energy buildup is left sounding thinner. And balance is the key here, more so because there aren’t any other instruments that could possibly mask the problem and hide it from the listener. So I would pull up a few instances of a DynEQ, and set each one to tackle just one chord at the time (this might be overkill but I like to do it this way).
For the high end boost, I like to add some harmonics instead of an EQ, but only if the guitar was recorded well, without any buzz or hiss, because this can exaggerate that problem. I use Sound Toys Decapitator almost exclusively, as it gives me the option to dial in different saturation algorithms, as well as a tone and a wet/dry mix knob. So I boost the high end, saturate it, roll off the lows, and then just mix in 10-20% with the wet/dry knob. I use this on many other instruments and vocals too, it’s brilliant for bringing instruments at the front of the mix.
Dynamic wise I would compress the guitar a bit more, just to even out the performance, as some chords are a bit buried behind the voice.
Another trick I like to do in sparse guitar mixes is to make the guitar large and wide, because there is plenty of room in the mix for that. The way I do this is I duplicate the guitar track in two instances, pan them left and right, then pitch shift the left one down 6-12 cents, and the same for the right guitar, just pitch it up. To widen them, I delay one about 10 ms, and the other 20-30ms, and then just bring up those two tracks in mix ever so slightly. There are tons of plugins that basically do the same thing, but i like to go in manually, just more fun.
Thats it from me, keep up the great work Dave!

Hi Dave,
gosh your voice is sounding GREAT!! Fab work… and I’m a bit later to the party so get to listen to both versions… really loving the tweaked guitar tones, makes a huge difference for me, thickening and warming the tone… (hah… it still feels weird to use the word ‘warm’ unadorned!)…

I do always struggle to listen objectively to covers when I know them so well, but you have clearly changed it so much that it works! And yeah, I hear you with the ‘simple’… often I find it so much harder than complicated…

I did have a teeny thought, clearly a nitpick and I’m only mentioning it coz we are in the ‘bash zone’… an intonation/breathing thing where you sing ‘my’ [breath] ‘mind…’.
For me, that slight disconnect between the two words caught my ear. Am sure no-one else would give it a thought…

There’s not much to bash regarding the performance. Your vocals work really well here. The whole thing sounds really nice!

If I had to bash anything, the very first thing I would mention is that the rhythm guitar had a bit too much low end on it…BUT it may be that I’m used to hearing a different kind of tone. It’s more about individual taste than anything that is actually “wrong”.

This is a really nice recording! You captured the emotion of the song very well !

Loving this Dave. Great vocals and the playing style is perfect for the vocal style.
V2 is the pick for me but that may be a personal thing i really enjoyed both versions. Version 2 the guitar is up there with the vocals which then sit better in the song. The guitar in version 1 is being overpowered slightly by your stronger vocals. I think this a great rendition of a very popular song and you have done a great re-write congrats

I really appreciate the fully specific suggestions for the guitar EQ.

I agree with @Chordwainer about this, @ColdRoomStudio. Since I am still wrapping my head around studio word, this is very helpful. I sure do wish that the Reaper Plugins were available for Mac. I do like them. lol

I sure do wish that the Reaper Plugins were available for Mac. I do like them. lol

Reaper (and plugins) are available for Mac. Download here:
http://www.reaper.fm/download.php

Reaper (and plugins) are available for Mac. Download here: http://www.reaper.fm/download.php

ReaPlugs is unfortunately Windows only.

Hey thanks folks! I did go ahead and make just a couple of slight further adjustments, and a final version is now in the OP. Also, some extra special ear candy in this version-- my beloved niece Amy visited me this weekend and sang for me on two covers I’ve had ready for the purpose, and while she was at it I asked her to add just a short bit of harmony bgv on this, and I think it really classes up the joint.

You’ll be hearing much more of Amy soon… the girl can sing y’all.