Piano hunting for the new crib :)

Always wanted a piano… haven’t owned one since I sold my Steinway shortly after graduating college. I haven’t lived in a place long enough to justify owning one since then (wow it’s been a long time). Got my eye on a couple of these suckers… Baldwin SD-10 9-footer. This isn’t the actual one (just the picture) - the one I was looking at is in Michigan for $10k more, but it’s in really good condition. The new lake has dual living rooms, on opposite sides of the house. The front living room where I’m gonna park this thing is 20x16, so it should fit in there pretty easy as long as it can turn the corner in the foyer! I’ll probably just run a pair of mic cables and a set of headphones over cat 5 to the living room if I ever need to record it (I’m sure I will eventually).

Piano in great shape! Plays well, very powerful!  We can negotiate delivery.  Please message me for additional details and videos!

There’s one in a nearby church I have a key to that I can go practice on anytime, but it’s not very well kept.

I can’t imagine life without a really truly piano… mine is ‘just’ a yamaha but had it from new and it is a wonder!

What would you consider to be the Stradivarius of grand pianos?

I can’t imagine life without a really truly piano

Yeah… I miss having one.

mine is ‘just’ a yamaha but had it from new and it is a wonder!

‘Just a Yamaha’?? lol… Certainly a piano to be proud of

Yamaha makes some of the most incredible pianos in the world. Their little 38 inch console pianos, and 40 inch studio pianos are rock solid staples in a lot of music college classrooms and practice rooms because of how easy they are to maintain, and how durable they are. They ago over time much better than many other pianos like Kawai’s, and can take hours and hours of use every day and not break.

But their high end stuff also goes head-to-head with any $300k bosendorfer or $165k steinway on the market.

What would you consider to be the Stradivarius of grand pianos?

I don’t really think there is one. I mean… let’s maybe consider Dumble the Stradivarius of amps… right?

On that line of reasoning, there’s really a piano that has achieved 25 to 50 times it’s ‘used’ fair market value as a playable instrument on name and mysteriousness alone.

The stuff in the $300-$400K range would be Bechstein, Bosendorfer, Fazioli.

Stuff like the Steinway, Kawaii, and Yamaha are down a level on PRICE ($250-$300k), but that certainly doesn’t lessen what they’re capable of. The prices differences are much more a reflection in the production and manufacturing technologies than in anything else like the materials or acoustical/mechanical engineering.

Bosendorfers are my personal fav, but they’re quite elusive on the open market. And at that level, you gotta watch out for counterfeits.

Interesting. I’m familiar with Steinway, Bosendorfer, of course Yamaha and the real world brands. The Bosendorfers I’ve heard had a very rich quality to them, lots of weight on the notes if that makes sense.

I had no idea they got into the 100’s of thousands. One good thing, they are probably a tough match for a burglar.

The Bosendorfers I’ve heard had a very rich quality to them, lots of weight on the notes if that makes sense.

Yeah. Totally agree with you on the ‘richness’. They ARE slightly less versatile than Steinways and Yamahas… while they’re the cream of the crop for classical music, they tend to not be the first choice for genres which require dense bright sounds with fast attack like rock, ragtime and country-pop very well. The American pianos are really the go-tos for that. Baldwin, Steinway, and Mason Hamlin - and American market Yamahas.

Bosendorfers to me, have an extremely unique sound. While a lot of the bonuses have to do with cosmetics and durability, I’ve always thought of four major unique attributes that really make a difference in the sound:

I think it’s funny how quickly I changed my tune on the importance of a real piano once I got one. I love the idea of having good sample libraries for recording, but a real piano is 100x more fun to play. I thought I’d hate having a real piano because they’re so loud, take up more space, require more maintenance, etc. but I rarely touch my MIDI controller now that I have a real piano.

Recording sampled pianos is certainly more convenient, especially if you are prone to making mistakes like I am, and I’m not really convinced that the nuances of sampled vs real pianos really matter on a recording, but when it comes to just playing, a real piano is so much more fun.

A full concert grand feels like overkill for a house, but if you can fit it and afford it, then it’s really just my jealousy speaking.

I bet at least 95% of drummers would say the same. That the samples are mainstay in mixes these days, but the experience of playing an electronic set vs a real set is just more satisfying. That electronic triggers and samples have their place, but at heart, we want the ‘real’ thing.

A full concert grand feels like overkill for a house, but if you can fit it and afford it, then it’s really just my jealousy speaking.

Actually, we’re trying to figure out how to solve a problem making a tight turn around a staircase when it first goes in the front door. We thought about tipping it up on its keys and using the 25 foot height of the foyer to bring it in tall ways, but it’s debatable how to stabilize it if it’s up on its keys with it’s ass sticking 10 feet into the air. We’re also waiting to hear back from a piano construction/designer to see if we run any risks damage it if we tipping a 1200 pound piano like that on its keys.

I thought about punching a hole through the wall and bringing it in through the garage. But we have problems with the studs being 14" on center. The piano needs an actual 14" to clear. We looked at other stuff like removing the living room window and passing it through the opening, but I don’t think we’ll be able to pick it up high enough. Ugh… funny that you mentioned ‘if you can fit it’ haha. That’s turning out to be a real problem.

That electronic triggers and samples have their place, but at heart, we want the ‘real’ thing.

Yeah, real drums are more fun to play, but they are so bloody loud that it adds a second layer of suckiness to the real thing. Pianos are loud, but not “Piss off your neighbors at 2:00 in the afternoon” loud. I converted my real drums to e-drums years ago and I’d be surprised if I ever go back. That said, if I had a soundproof room, I would.

Yaaaaaay. Finished up inspections and got it under contract for $15,000 less than I was originally planning on paying!! I need to wait for the new house to close in order to have a place to deliver it to, and also contingent on if we can fit it through the door and around a kind of tight corner - well… not a tight corner per say, but it’s going to be cutting it close for something 8 feet long. We’re a little concern about but not too much. 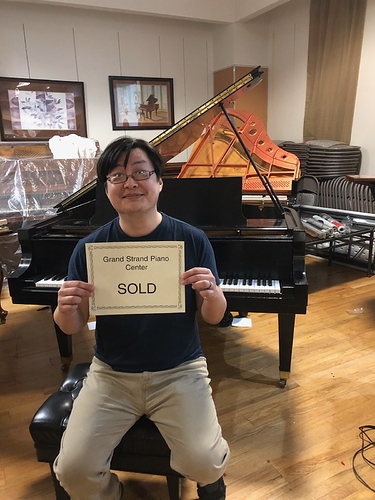 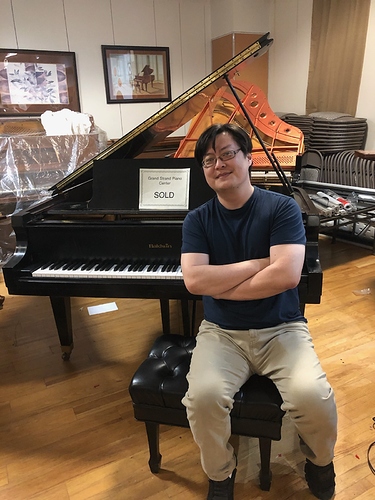