One minute acoustic to my wife of many years

pulled after a week to free up space

I sent her letters and didn’t know she kept the

beautiful! Love the acoustics. Voice is coming along fine for the most part. The close vocals work for this song to be honest. Just needs a bit of EQ to clean it up a bit thats all. The acoustic guitar bass can be brought out a bit more and a bit of ambiance to top it off and you have a done track

Hi Michelle I isolated the vocal and tried all kinds of EQ and just gave up on it. This AKG 414 is know for putting some highs that I don’t want. I am not using my LA 610 anymore. It gave me more amplification.

Right now when I crank up the mic, i go until the first green appears and I hear some noise. The problem is that I then have to get within 6 inches to get enough volume. Even then, I have to jack it up by like 8db just to get it to be loud enough. I know that is not the proper thing to do.

As far as the acoustics, I tried something a little different. This mic has a roll of button on the back. I don’t like all the setting tho. They are 0-4-80-160. I set the mic at 80 to at least get rid of some of the junk. I think the 160 setting would take out too much. I will have to experiment with that.

I was going to go farther with the song, but I just didn’t feel like lyrics again. Maybe tomorrow. Thanks for listening

Hi Michelle I isolated the vocal and tried all kinds of EQ and just gave up on it. This AKG 414 is know for putting some highs that I don’t want. I am not using my LA 610 anymore. It gave me more amplification.

You likely just need a lower shelf on the lows and try a compressor targeting the lows a bit to sort of smooth the variations in the lows.

Hi again I am going to try a different mic just for the heck of it. I am having trouble taming this beast. I did turn up the acoustics like you suggested. I sang it again, but it wasn’t very good. I put that vocal 50% on one side at a low volume to better hear the lyrics. Might not be an acceptable technique. Also think I will continue on to a chorus. Should be in Texas early Jan.
I just packed up some of my stuff from my studio here in Michigan. I won’t be back until the last of April. Sad day. Going from 20 degrees to 70 though. ha ha ttyl

There is some low mid resonances I can hear on the vocal that is “muffling” the sound.

I pulled it quickly into my DAW, spent about exactly a minute on it with Slate’s Infinite EQ in mid-side mode, only pulling the resonances out of the middle channel, so the guitars weren’t affected so much. I searched around for the resonance I was hearing and found them. I cut 2.66dB at 317hz, 1.69dB at 167hz and high passed at 44.7 hz with a gentle slope to get rid of the subsonic rumble like this. 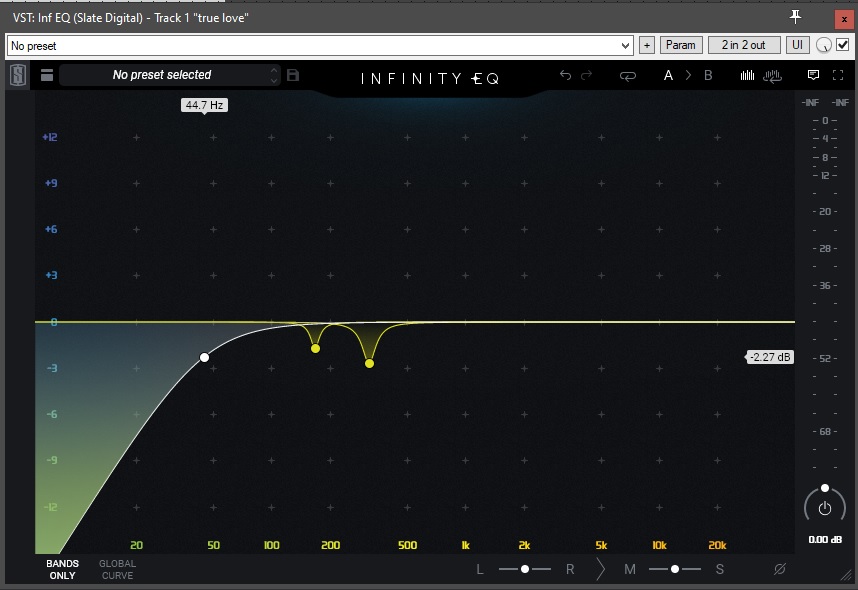 Whew! That took far longer to explain than it actually took to do! Just a subtle change, but I think it brings the vocals more forward and clears them up.

Hey bud you went way over and above the line of duty here. But i liked it. Ok, so i do sometimes use that first curve, but I think mine might be a little more to the right? I would have never thought of doing those other dips though. This is the difference of knowing what you are doing. ( or not) I isolate the vocal and spent an hour trying everything and still didn’t like anything I tried. Going back to my live band SM 58

My wife just walked by and said “why the weird face”? I said “this dude just made my vocal clearer and only has the full track”? I wish now that I sang that better for your efforts. BTW I just took a pic of this and entered into my “mixing tips” word document.

Yes the explaining and the effort is more than I deserve. ha ha
I think when I get to Texas, I will take this further. Right now it sounds like a verse and prechorus?

I feel lost right now with my studio shut down. Have a Merry Christmas.

Hi I know I am at about a 5 percentile of mixing techniques. I really appreciate anyone who has honed their craft. I have that confidence in home building, mechanics, welding and heavy equipment. I paid the price there. I do love this music thing the best tho. Best to you

feaker,
I listened to the ColdRoomStudio version of your song. It all sounds very nice! Well done to everyone involved.