I just shorted out my old music set up in which was music from my computer - to an audio interface - to an audio receiver - to speakers with speaker wire.

My question is…is there an interface that has outputs for speaker wires (where you insert the copper speaker wire into a hole and fasten it) that bypasses the whole audio receiver itself? Or is this a good way to go still? Is there any recommendation for a set up for listening to music? The reason I use the old speaker wire speakers is because I have about 20 speakers though out my work space and I am trying to keep with using them.

You could probably adapt the wires to plugs that would fit the interface but you still need an amplifier to run the speakers. Most interfaces don’t have amplifiers but maybe yours does?

My interface did not have an amplifier, I ran it to an old stereo receiver. If I adapted the speaker wires to 1/4" jacks, I would have to have more than a few 1/4" jack outputs on the interface.

Well if you want to upgrade, the new systems are wi fi based and wireless but then you are at the mercy of software updates and bluetooth conflicts etc.

So what exactly shorted out on your existing system?

Thanks so much for the input. I was adding more speakers to the receiver, and I added a pigtail wire so I was not putting a bunch of speaker wires into one speaker outlet and the pigtail wire end dropped down and went into the hairline gap between a plug in an outlet. So the wire touched the live prong on the outlet and there was a spark and I lost my computer, interface and receiver in one swoop.

there was a spark and I lost my computer, interface and receiver in one swoop

Ouch! Well some devices have overload protection, you could search the manuals and schematics to look for fuses etc., you might be able to revive some of your components. Or take them to a repair shop.

Edit: Do you have a cable or satellite provider?

Okay, not sure if I’m understanding what you’re hoping to do, but a standard audio interface won’t be powered, and the 1/4" jacks would be line level outputs, which could be adapted to run powered speakers, or as in your case would be connected to an input on a standard audio receiver, which would drive a regular set of non powered speakers using regular non terminated speaker wire.
Since you mentioned you have multiple speakers, if you would like to hook them up to a receiver or integrated amplifiers you would need a speaker selector. This is a box that allows 4 to 6 pairs to be simultaneously connected to one set of speaker outputs on your receiver. The speaker outputs would connect from the receiver to the box, and then out from the box to the individual speaker pairs.
The box would have on/off switches for each pair, and most importantly a transformer that would keep the impedance constant to the receiver regardless of how many pairs were selected. Pig tailing speakers into a receiver is a fast way to blow up a receiver, since the impedance drops in half by doubling the load. Most receivers will not handle much below 8 ohms, and very few 4 ohms or less. Two sets of 8 ohm speakers result in a 4 ohm load. The transformer in the speaker selector keeps the impedance steady to protect the amplifier.
So, if the receiver is shot, you need a receiver and a speaker selector box. If the interface is shot, you need that too. If it’s all shot, you could save a little using powered speakers connected to the interface. 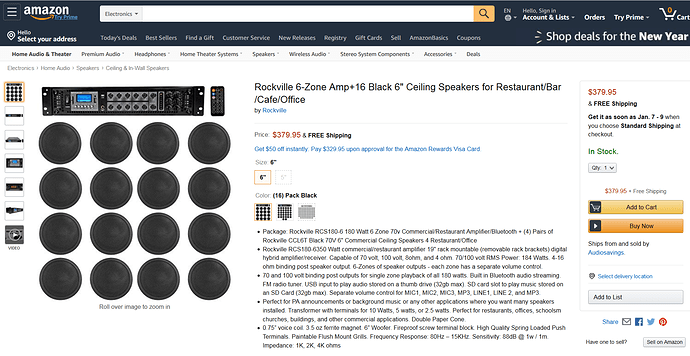 Edit: Do you have a cable or satellite provider?

I have Xfinity and I use Comcast for my internet.

Okay, not sure if I’m understanding what you’re hoping to do

I was just trying to see if there was a way to eliminate a stereo receiver and get an interface that would push some of the speakers. I see now that it is not really an option.

This is a box that allows 4 to 6 pairs to be simultaneously connected to one set of speaker outputs on your receiver.

I have one of these but I never hooked it up. I purchased it so that I could turn on and off different sections of speakers, but that is great to know that you can’t put more than one wire in a speaker output jack.

I JUST bought a new receiver on Ebay and now I want to get that system from Amazon you sent, that is perfect for what I need. The new few extra bucks I get, I am totally buying that. Thanks for sending that.

that system from Amazon

Might be perfect but you should shop around, there’s other stuff out there.