Need some help with virtual instrument audio routing on Studio One

According to this forum thread, it appears you can not have multiple instances of the same instrument on separate channels???

I have a session in S1 right now that I’m trying to push out using:

Is it not possible to create 2 separate channels calling 2 instances of the same plugin in this DAW?? 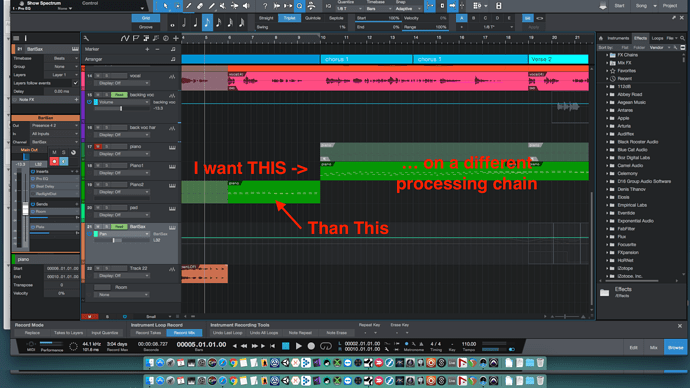 I think you just needed an excuse for a screen shot to show off all your cool effects.

Oh…there’s more where that came from!!

I need to figure out if there’s a way to do it. As a quick fix (because I’ve got to get this handed in) I just printed the audio of the verse piano to a stereo wav file then set the other chain. But gosh… this is not a very intuitive way of managing plugins. Then again, I’m still pretty new with Studio One. Clients requiring that I work in it so I can send the session back to him for him to study.

I don’t know anything about Studio One otherwise I would try to jump in there. I am sure someone will know and help you out.

I don’t think it lets you do that. I think you can only have one instance of each plugin in each session.

I am not getting what you are wanting to do sorry.

you can duplicate with every thing in it and then manipulate it separately with a right click and and select duplicate(complete).

That was the very first thing I tried. And the behavior is very odd. This is strange, and unique to this DAW.

When you duplicate everything on a virtual instrument it creates another MIDI channel. If you use the ‘create new track’ to create a new VI instrument, then place that same instrument on it, it creates another MIDI channel but routes it to the first instance. You can have a seemingly unlimited amount of midi channels all routed to Addictive keys, but I don’t understand how to place two instances of addictive keys on two separate audio channels. (Not midi channels)

Here’s what it does - lets say I hit ‘duplicate channel’ six times.

so i copied and then was able to put a churongo on one bus1 and cello on bus2 and both are on midi input 1. is that what you are wanting? by the way i am running studio one 4.

Its not working. Maybe its something in the settings.

I need to have Addictives grand piano on Labs 1, then Additives upright piano and Labs 2.

When I change the piano in 1, it changes the piano in 2. I also can’t put separate plugin chains on labs 1 and labs 2.

When I click the little keyboard icon on the lower right of the stip, it pulls up the same instance for both channel strips.

maybe you could send me a chunk of your project and i could try it. by the way if you hit the duplicate option and not the duplicate (complete) option it does link them to the same VI instance

It worked when I clicked duplicate complete. That allowed me to have 2 multiple instances with different patches. Then I was able to figure out what I was doing wrong.

Creating a track using this method… 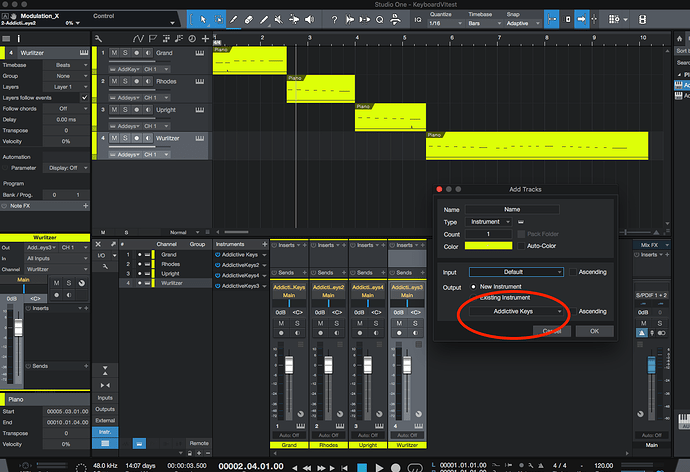 …appears to yield the same result as using duplicate complete. 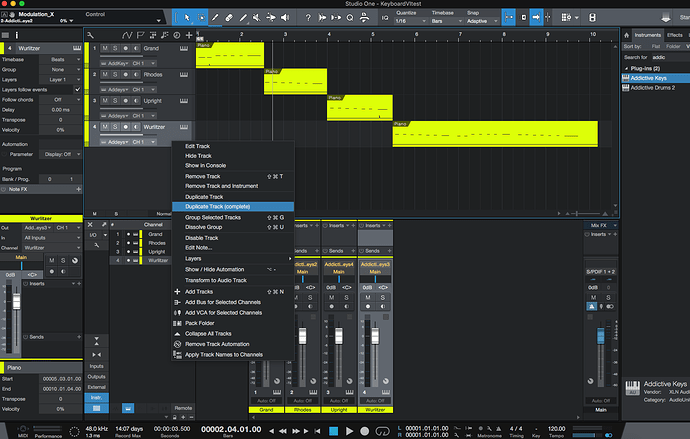 Regular right click and duplicate creates a midi lane (assigned to the same midi input channel) that routes to the same instance and can only route to one mixer fader. I didn’t understand why I was seeing a midi lane created in the arrange window but was not receiving an additional channel in the mixer.

That was the problem! 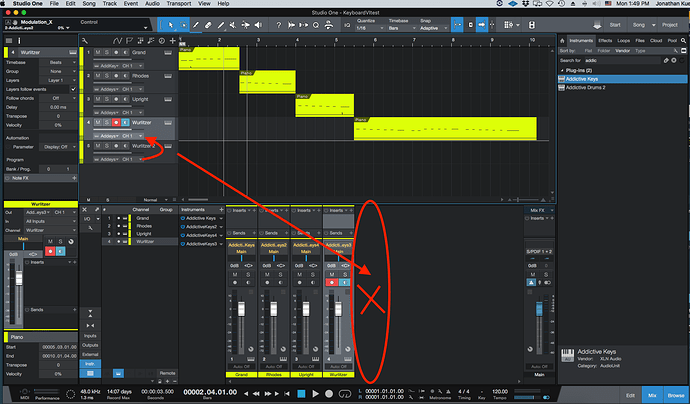 good i am glad that worked for you. It was nice for me to figure that out now I know more about how this works.

I knew you can do it as I usually have several instances of Miroslav Philharmonik running per session as I don’t know how to program it for multichannel settings so I use only one instance for say 4 voices. I am really midi-phobic

You can’t put a virtual instrument on a audio channel. You can record or edit in the midi channel then render what you have to a audio file. You can go back in case you want to make changes. I do this to save on CPU usage.