I could use some tips from bassists about taking care of fingernails on the right hand.

I find that after playing bass for not all that long – half an hour or so – the nails on my right fingers really wear down badly. I’ve noticed for years that my nails get more and more brittle as the years pass, and even playing steel strings on a guitar with my nails is problematic (hence I use Alaska Piks whenever I play finger-style on every acoustic except my classical). This is obviously not conducive to getting better at bass…! Or anything else with the instrument for that matter.

What do you bass players do to take care of your nails and fingers? Thanks!

I’ve always used a hard plectrum as opposed to finger-walking, using a light strumming action or plucks, depending on the song. I did frequently get blisters on my l/h fingers when I started playing, but now I’ve got hard skin!

You might try false nails… you may laugh, but one of my friend’s daughter does that for a living, and a few of her clients are local bassists!

I find that after playing bass for not all that long – half an hour or so – the nails on my right fingers really wear down badly.

They wear down, or they chip and break? I don’t know if I ever had a nail ‘wear down’ without using a nail file.

Yeah, that’s part of the aging process AFAIK. I think you can take gelatin tablets or similar supplements to help strengthen nails. I have been considering that myself.

What do you bass players do to take care of your nails and fingers?

I just clip and file them pretty meticulously. As I said, mine do not wear down noticeably, and they don’t chip or break all that much but probably because I’m careful about that. I have always clipped them short, though recently after reading about Geddy Lee’s style - that he learned to grow out his nails on the right since he doesn’t use a pick at all - I have tried using some longer nails with finger playing.

I used to do a fair bit of metal style finger plucking on the guitar (i.e. Angus Young, EVH) so I didn’t like my right hand with long nails then. I probably still don’t, but have been trying it out on bass when my claws are long. I play bass with either fingers or pick, depending on style and how I feel. Or if I played fingers so much they are sore, switch to pick.

I’ve heard of people using products like this one but I’ve never tried it.

I find short a nails as possible and play wity fingers works for me. I dont use a pick and play woth fingers

Do you not pluck wity fingertips rather than nails? 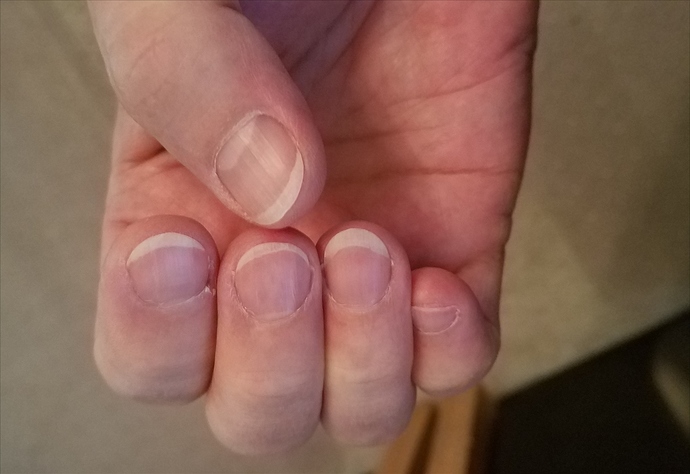 I keep them that length for fingerstyle guitar. Notice how the nail on my middle finger is noticeably shorter? It was as long as the others until yesterday’s bass playing, which ended up tearing a section off, and I had to file it smooth again (you can’t tell from the pic, but it’s still not completely right, still some thin bits of the nail that will be at risk for a week or so until it grows out some more).

I’ve always used both fingertip and nail when sounding strings, and the way my hand sets up on the bass it would be next to impossible for me not to include the nails when playing it. And yep, I have resorted to using a pick many times to avoid this problem (and when the material was conducive to doing that).

So to answer Stan’s question, the nail damage is both brittle cracking and just wearing them off. I even have flat-wound strings on the bass which feel very smooth. I’m not the least bit opposed to having acrylic nails put on, I know that a lot of players do that. What about a paint-on application, like a nail hardener or lacquer of some kind? Are such things used much?

When playing bass with fingers, I almost never want my fingernails touching the strings. I cut them as short as possible because it’s the soft sausage fingers that make finger playing sound good to me. You could just play with a pick if you want that bright attack.

If you want something softer than a pick, you can use these wedgie picks. They’re soft rubbery picks. I use them on bass when I need to play faster than finger playing will let me, and it’s a decent compromise between the two styles. 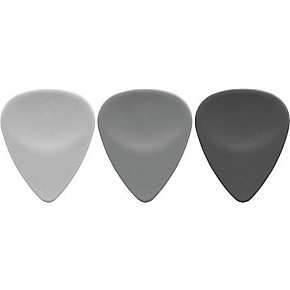 Get the guaranteed best price on Guitar Picks like the Wedgie Rubber Guitar Pick at Musician's Friend. Get a low price and free shipping on thousands of items.

Thanks @bozmillar Boz, that’s a good suggestion. I definitely don’t want to cut the nails really short given that I play guitar about ten times more often than I play bass. I will give the rubber pick a try, that might be the happy medium…

I don’t really have anything sensible to add except:

When playing bass with fingers, I almost never want my fingernails touching the strings. I cut them as short as possible because it’s the soft sausage fingers that make finger playing sound good to me

thats exactly how i feel about bass playing too and is what i was trying to say.
you nailed it! (pun intended lol)

bass guitar + pick = failing at playing bass in my eyes. just my opinion before the google warriors strike me down with their examples of picked greatness. but for me 90% of a bass tone and groove comes from the fingers

I would much prefer to use my fingers, for sure. But I have to bow to the reality that they just can’t take it. And I am not sacrificing my guitar-playing nails to play bass, that just ain’t happening.

And not to be a Google warrior, but… Chris Squire.

Chris squire was an amazing bassist. But his sound was uniqie, he used to use various stereo amp and effect set upsto get his unique tone. He was more a lead bassist and treated the bass more like a guitar, yes he used a pick it suited his aggressive trebbly tone. But still I prefer to hear fingers

You are of course completely correct E… I was lucky enough to see Yes several times during their glory years, and always marveled at how Chris was just as you say, a lead-guitar-like bassist. I wish I could just play with my fingers…

I’m a big yes fan! But when it comes to bass i’m a big tony levin fan!
Funk fingers!!!
Maybe you could try them?

I’m a big yes fan! But when it comes to bass i’m a big tony levin fan!
Funk fingers!!!
Maybe you could try them?

Oh hell yes, Tony Levin is one of my heroes. Those finger extensions he uses are amazing. I’ve had the good fortune to see him perform with Peter Gabriel several times and then again with Anderson Bruford Wakeman Howe in the early 90s. A total master. And that Chapman stick…!!