My monitoring rig is freaking out...can someone take a listen to this?

I just got done recording a kid doing his first session on solo acoustic guitar. Him and his parents just left. I inserted a standard avid 1 band EQ to flip the phase and it dang near turned off my right monitor, and I couldn’t get it to come back on. I restarted the session, and something sounded really weird with the phase. But then I loaded a backup copy and the problem was still there.

Can someone tell me if this sounds out of phase? I’m trying to figure out if its audio files inside ProTools or the something in the monitoring chain. Youtube and quick time also seem to be acting funny, but I can’t tell if its listening fatigue and my ears are just playing tricks (because listing to badly out of phase mics for prolonged periods of time can screw with your head).

Can someone tell me if this sounds out of phase?

I would ask how did you mic and record the session? Look at that. The guitar sounds very pretty, nice performance. I don’t hear anything weird, except it doesn’t sound like a mono recording (one mic), it sounds like some kind of stereo micing with the left side emphasizing the bass strings/notes and the right side emphasizing the treble strings/notes. But it’s very subtle, I can’t swear that’s actually how it is, it just sounds that way to me. If you have multiple mics, how do you have them panned in the bounce? Did you put any effects on it besides phase flip?

I would ask how did you mic and record the session?

I did not flip the phase. Effects were 2 reverbs and a distortion plug on aux busses, all panned center.

Happy to explain it, but the question was if the mics were out of phase. Or if what was printed from the DAW shows up as having phase problems in anyone else daws? or on their meters.

You mean off axis toward the bridge? A visual representation could really help here, as the directionality of the mics in relation to the instrument might give clues to phase.

AKG C12 capsule directly on the 9th fret, slightly off axis toward the sound hole. Mics were panned hard left, and hard right to a subgroup.

Same comment as above as to exactly what you’re talking about. I can visualize it in my mind but that doesn’t mean my visualization is correct. How far is that mic from the fretboard? How far off axis toward the sound hole?

If you panned the mics hard and sent them to a subgroup, where did you put the EQ plugin where you flipped the phase? On the subgroup, or one of the mic channels? A diagram of all this would help immensely, as you have given some specifics but left others out.

I did not flip the phase. Effects were 2 reverbs and a distortion plug on aux busses, all panned center.

But you said you did flip the phase (on something) which caused your right monitor to freak out. Did you disable all the effects and plugins and try it that way?

the question was if the mics were out of phase. Or if what was printed from the DAW shows up as having phase problems in anyone else daws? or on their meters.

We don’t know exactly what you did, so we can’t tell you if a mic is out of phase. We’d have to have a diagram of that whole setup, and the individual tracks. Anyway, I zoomed in to the stereo track since you said you hard panned the mics, and the differential between the left and right sides looks really weird. In some places the waveform matches up, in others it looks way off. If your mics were placed so divergent as you indicate that might account for it. As I pointed out previously, each side has a certain emphasis in the bass/treble relationship, as I was hearing it through my speakers. (very pretty sounding effect, but also quite unusual for one instrument)

That said, putting it on the meter showed a weird phase correlation where it jumps from positive to negative very quickly. I noticed that when the bass (tonic) drone note hits is when it goes sharply to the negative correlation. But the rest of the time it tends to stay positive. This all happens in the space of 3-4 seconds and is fairly repetitive.

Next time, try a Mid/Side mic setup. It’s much simpler and would probably avoid some of this weirdness.

It was basically like this, but with the larger mic moved a little further to his right. 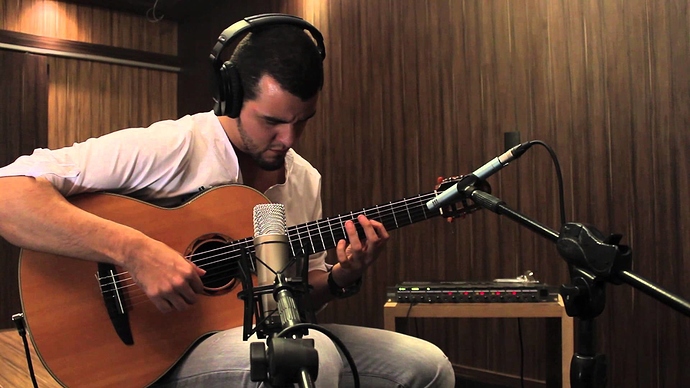 to me it is sounding phasy in the highs.

There’s way more low end coming from one of those mics, which, in my opinion, sounds bad 90% of the time. Toss Mongoose or some equivalent on there and it fixes it right up.

Here’s what it sounds like after mongoose with a pretty hefty setting of 1.5kHz.

Sweet. I’ll try it in a bit. I was in the middle of trying to clean that up when that phasing problem happened, but I’m actually not hearing it in the bounced file. But last night I was listening to the bounced file and hearing the same thing, which means it had to have been the monitors. This morning I turned everything on it it was gone. I wonder if power cycling the Avid converter and Crane Song fixed it.

I certainly agree it sounded bad lol…but I couldn’t even tell what was going on with my right monitor sucking the phase into oblivion!

I didn’t even read your message before I started playing it and it sounded out of phase! I guess that answers that. I like what Mongoose did to it. How old is this kid? Tell him I’ll be his Bernie Taupin. I write beautiful lyrics for when he wants to add vocals. Also, I need that emoji badge, but I had emojis. So here’s something crass just to give it me on personal touch.

See my lyrics in this thread. Anybody want to be an Interstellar Fur Trader?

Truck Driver Transvestite. I think it would work well with this music, and steban rejected it as not fitting the overall concept of that project.