Mixing Thought Process and approach for the 'Wasteland' Song

I think it would be a great idea for everyone (who wishes to) to share their thought process for mixing the wasteland song for the contest. Why they made the decisions they did, as it would help me (and others) see point of view of other mixes submitted. It would also help learn how certain thoughts get translated into mixing decisions.

I will go first
I am a firm believer in the magic of the song. I feel every mix is different and there is no “template” that can magically mix a song that is received well by the listeners. I think a mix should work alongside the feeling of the raw song.

I try to “zone” into the mix, and try to get inside the mind of the artist and get an idea of feelings and emotions. Trying to get to the “core” of the performance before I make any kind of mixing decisions.

In case of @Cristina 's wasteland, I heard a lot of emotions, natural cracks in the voice, solitude, dryness of a wasteland and a personal touch. I knew right away that a song like this should not use a generic “commercial music” template. I painted a picture of the sound in my mind and made choices like isolation of vocals by creating an envelop around the voice, enhancing the feeling of isolation, anger and pain. I chose strings to increase the intensity of the emotions.

Normally at this stage, I looked for proper reference tracks I used some Christina Perri and Rachel Platten and Dixie Chicks songs for the reference for wasteland.

Ill be honest, I never listened to the original reference track till after I submitted my mix. Did not want to be biased

Okay flutoronni and cheese, I listened to the reference track for an idea of the song. I thought I could best it, or at least show the song from my warped perspective. Before you joined the site I made many joke mixes of the song, detuning the vocals, fake live performances that erupt into riots, intentionally terrible mixing, bad use of too many effects, electronic noise remixes, St. Anger mixes you name it. They kept the song fresh for me. If you want to hear them I’ll PM them for you. Holster hid them all in the NC-17 hidden section of the website only the most fucked up of the fucked can see called the @TourBus. It is a magical place where you all the adult content is moved or started.

As far as actually mixing the real thing, (not Faith No More), I knew I wanted some luxious reverb. The song practically mixed itself. I just had to do some EQ work, but this one was easy.

I agree with CPF, that the well recorded audio files and the right arrangment made this a relatively easy song to mix technically. Most time I spent on balancing and panning than equing and compressing.

I tried to get the feeling of the song as well and I decided I’d try to compliment it with some additional instruments without changing the original feeling too much. That for me was the hardest part.

So I recorded an electric upright bass as the most obvious addition to give the mix a low end.
All additions apart from that were small and discreet. Like an “ice piano” (coming in the same time with the original piano), some strings, a synth bass before the solo and a 2nd voice on the second verse.
Reverb and delay were of course paramount to this song for me in order to create the desired ambience. I just tried to use them in a way that they left the lead vocal intimate and in your face. I used less at the beginning and more when the mix got busier.

I also didn’t listen to the original or even any other contestant’s submission before I finish. I used som Sade songs as reference.

thank you for your point of views! It helps seeing a perspective for the mixes. Sure can use more thoughts, join in fellas, I dont bite

Ill be honest, I never listened to the original reference track till after I submitted my mix. Did not want to be biased

I didn’t listen to ANY Wasteland related tracks until I finished my mix as to avoid any bias or influence. I’ll come back later and give a synopsis of how I approached the song.

I went through a strange trip on this one. Probably because i got the files right away loaded them up and then only spent a little bit here or there on it. I started with a plan to add a cello, and maybe bass and to keep it nice and dry. But as time went on i didn’t have the time to get my cello player in to record this because he is working on another recording and I don’t know i went with wet. As seems to always happen with all of my contest mixes i just can’t seem to find the time to go through the testing on different systems and making changes stage.

When the contest was first put up, I listened to Cristina’s version and my first thought was “Damn! Don’t screw this up”! I’m sure she’s tired of hearing it, but Wasteland is an incredibly well-crafted, introspective and just downright beautiful song. My favorite song I’ve mixed this year - well, LAST year now.

My approach evolved: for sure, the first thing to tackle was the vocals. It was a very dynamic track the way it was put together, and I ended up going through the track and clip-gaining words and phrases throughout to level them. For FX, my initial approach was to drench it in “wasteland of reverb” like many have done. To clear things up with so much reverb, I wanted to try a technique of side-chaining a compressor on the FX to the dry vocal, so the FX would move out of the way when she was singing. I thought it worked really really well. So well in fact that it brought the vocal way up front, at which point I decided I liked intimacy for an approach to this song rather than an aloof distance. So my direction shifted to the perspective of a very introspective melancholy vibe.

That’s when the “yell” section kind of started to grate on me, and even started feeling “forced” and I felt it no longer fit in my take on the song. So I edited it out to see if it would work that way. I thought it did. Furthermore, with the edit, I thought the solo itself took over as the “outlet” moment for the song and carried the emotion that the yell was invoked without the harsh vocal.

When I cast around for references, I ran through my favorites including Natalie Merchant and Tori Amos and eventually ended up with Aimee Mann’s “Wise Up”, but mostly used “Save Me”.

Thanks @FluteCafe - interesting thread. I’m always curious myself about tricks and techniques that work for others. Fun stuff for sure!!

I know, the reverb sounded good. The only reason why I didn’t go that route was because my understanding of wasteland was different. Like a desert. A desert has no reverb, no sense of space, dry.
Its very interesting how different interpretations can lead to so many different kind of mixing decisions. Fascinates me.

I guess my “wasteland” was more metaphorical in the sense of a vast lonely space. I’m thinking more like Plainsong, the 1st track from Disintegration by The Cure. I always loved how the song slams you with this huge wall of sound and then follows it up with a solitary little guitar weaving its melody in the face of all of that. It says so much before there are even lyrics. Just brilliant IMHO.

Its very interesting how different interpretations can lead to so many different kind of mixing decisions. Fascinates me.

Me too! I love this stuff.

…I recorded an electric upright bass…

Ah ha! I wasn’t sure what you used when I listened to your mix. Technically, it IS “fretless”. 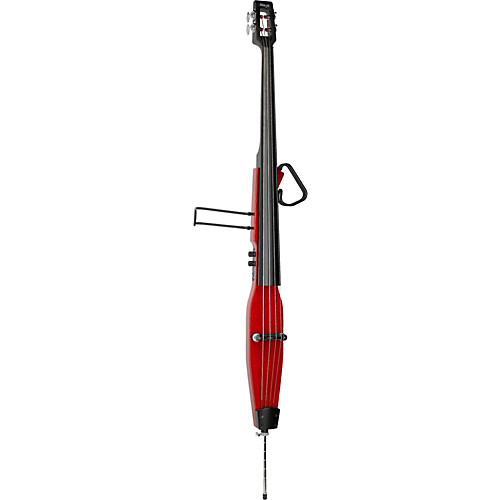 That was it.
Impressive looks!

Niiiiiice! With that thing you must have been going for the “techno-futuristic wasteland” vibe.

That was maybe the 3rd time I ever recorded a bass.
I usually work with Trilian.

The need of a bass guitar was too strong for me.
So after just a level adjustment I took my
ultra cheap VANTAGE Bass and recorded it.
Played with a dynamical palm mute and pick up,
to keep the control of the sustain (not to fill the mix)
and have a “tic” that could help a Heartbeat like kick sound.

In fact the song is so easy/simple/clever that my obsession was not to break it too much.

Tonally if though that it has to be smoother than bright.

Nothing special and nothing drastic but a parallel comp for the snare focused in the lo mid range.

thank you for all your valuable input

Thanks all for sharing all those thoughts, very interesting!