I got this in my email and thought someone might find it useful. 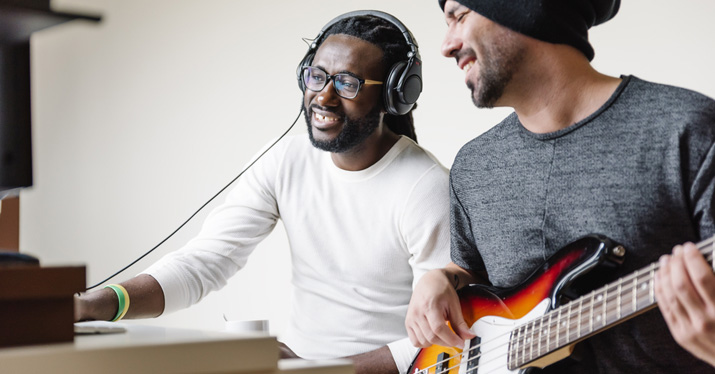 Use these bass mixing tips to take your track to the next level – Don’t get discouraged if it takes a while to get a bass track just where you want it.

I remember struggling with mixing bass guitar for the longest time. I’d still say I’m nowhere near being an expert at it.

Thanks for the link @BigAlRocks!

With bass guitar it’s usually more about correcting the performance. Even great bass players don’t get it right all the time, and amateur ones (including myself) are usually well wide of the mark in terms of maintaining the level and timing of each note so:

Then you can add sparkly bits, but it will probably be sounding so awesome by then that you won’t want to bother.

I have recently picked up the Bass Rider plug when it was on radical blowout sale (twenty bucks or something) and have been experimenting with it on a couple of tunes I’ve got in the hopper. Seems useful, although I still need to explore in more detail and find the right settings that will not overly “ride” stray bits in between notes-- all doable, I just haven’t taken the time yet to fully check it out.

Adrian, are there no circumstances under which you’d want the bass notes not to always be perfectly on the grid? Strikes me that doing that all the time could rob a performance of some feeling-- of course, depends totally on the material. For harder rock like the work you do with Salem, is that the driving factor? For example, I’m working on a cover tune right now that is (like so much of my stuff) very quiet, and in fact is drumless, and I’m using my bass performance to give a sense of movement to go along with the soft acoustic guitars. I really don’t think I would want every bass note right on grid.

That said, probably the most common criticism I get is about timing, so I may not have a good leg to stand on there…!

[quote=“Chordwainer, post:4, topic:959”]
Adrian, are there no circumstances under which you’d want the bass notes not to always be perfectly on the grid?
[/quote]I’m generalising. No method or technique holds hard and fast for every cirumstance. I was just trying to help people get into the ballpark.

[quote=“Chordwainer, post:4, topic:959”]
For harder rock like the work you do with Salem, is that the driving factor?
[/quote]I can’t imagine why anyone would want a bass note played that was barely audible or twice as loud as all other bass notes. Clarity is the driving force behind pretty much everything with Salem - and most other genres I record.

[quote=“Chordwainer, post:4, topic:959”]
I really don’t think I would want every bass note right on grid
[/quote]Don’t knock it until you’ve tried it!

Don’t knock it until you’ve tried it!

I meant only in the particular tune I’m working on, not in general, just to be clear.

Agree completely about wanting each note clear and present. Good topic for discussion!

[quote=“Chordwainer, post:6, topic:959”]
I meant only in the particular tune I’m working on, not in general, just to be clear.
[/quote]Yeah I know so did I. What’s the worst that could happen?

What’s the worst that could happen?

Not a dang thing!

I do understand where you’re coming from, but when a note is raised or lowered in level, it doesn’t suddenly lose its intended impact. You can turn a whisper up to 11 but it won’t suddenly sound like a shout, it’ll sound like a whisper that you can hear.

Don’t knock it until you’ve tried it!

Yup… While I hate the idea of it, it does make a big difference sometimes. But I won’t chop up the whole thing(usually). But getting the “ones” tight goes a long way…

Not an expert on mixing bass… But I do play bass. And I stayed at a holiday inn last night

But the main thing for me is keeping the bass on “the bottom” of the mix and dead down the center.
I want it to be the one stationary object in the mix (99% of the time).
I’ll apply something to control the transients like a tape plug or MV/MV2 right to the item and/or edit the waveform. That does all the heavy lifting and ironing out. Then I’ll do the actual mixing/processing.
For me, that usually includes multiple copies of the bass track and band limited processing (think bi-amp) to be summed to a bass buss with even more “stuff”. And I always have a true peak limiter on the last slot before going to the master. Just a safety net.
The only thing that changes is the actual amount of processing/editing/ironing. That is a contextual decision depending upon the tune…
have fun
rich