I worked for about 12 hours on a rap track called “Taste I Could Savor” by a producer in my area. He brought in some reference with some unique elements. I kid you not, in 15 years of mixing, I’ve never been handed a track that had frequencies hitting at 12 hz. Yup. 12 hz. So it called for some precise attention to the low end image, something that I’ve been studying fairly intensively for the last several months.

Normally I take everything below 20 and just dump it. I couldn’t believe what I was seeing when I placed the reference track under the Waves PAZ analyzer and there was information coming through from 10 all the way down to 1. My goal wasn’t to copy or emulate the reference, but to figure out how and why sub frequencies were able to work in this mix, and hopefully apply some of that to the one I’m working on. Here’s the reference track and some insight into how it was made.

I gotta tell you, there’s very few rap/hip-hip producers I could give 2 shits about, but this Yung Lan guy is building himself a nice little resume.

Here’s three screenshots of a two and a half second clip that give an idea of how that ramped up kick behave when placed under an analyzer. 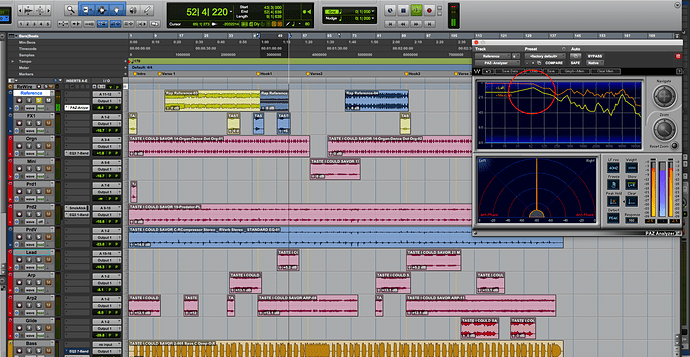 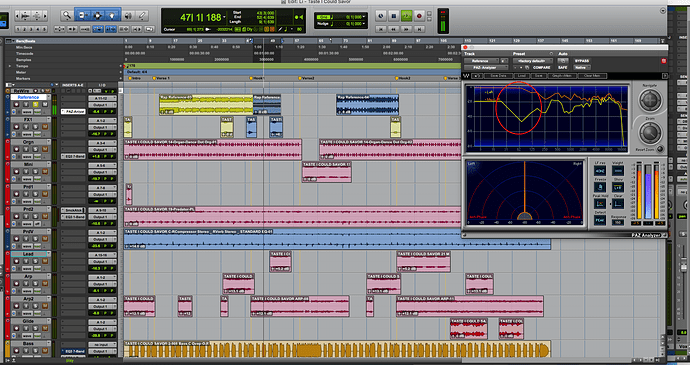 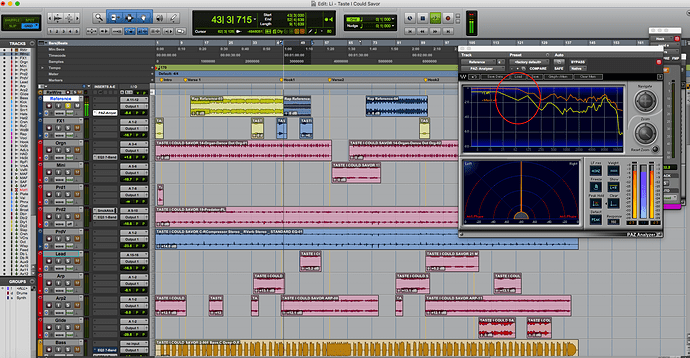 If you pay attention to that line at 62, you see a quick decay and if you count the bpm on the “Booty” reference track, its timed to a quarter note. However, the ADSR envelope releases the 62hz frequency at one sixteenth note. Which at 72bpm is about 208 milliseconds. So that one particular frequency starts a slower decay while everything immediately above and below it hold.

I fought with it for several hours last night, and this morning called him back and told the producer that for “Taste I Can Savor”, he needs to re-time the envelope filter in Ableton Simpler in order to get this sound to work at all. I was pleasantly surprised how well that the Boz Big Clipper jived with his similar sounding 808 style kick, and also how much the Sasquatch (which I still use from time to time) also helped. I’m pretty sure he’ll let me post the mix when we get close to the finish line on this one.

Really interesting, how much headroom are you giving up to make that happen? Seems like it would just be a fluttering woofer on most systems. Cool idea about timing it though, never thought of using multiple thresholds like that.

how much headroom are you giving up to make that happen?

I’m gonna do some more work on this today. I did get the producer to send me a new bass sample and he changed some of the envelope parameters in Ableton. I haven’t thought much about headroom and 2 bus levels because I’m not sure where the other 2 sub bass sounds (A super low B3 which I’ll use the @bozmillar Mongoose plugin to control), a thudy dry 808 kick, and this long ringy kick-bass think I’m working on now.

If I have any trouble with overloading my master I’ll switch outboard and use the analog summing mixer.

Supposedly there is a scene in “Blackhawk Down” that has a 7hz sound of a helicopter blade that is produced by 18" sub-woofers in some theaters. Dance clubs also have 18" sub-woofers, some cars have 16".