Mixerman needs to raise cash to write a new book. I'm in. Any takers?

Just thought I’d mention this to you guys incase anyone would be interested and didn’t see the email because you’re not on his mailing list. For those of you who don’t know, this guy has made incredible contributions to online communities of recording engineers just like ourselves often at no expense. I know many of you have read his work in the past. While he has his share of haters (like everyone else online eventually will), I feel the knowledge and experience he has willingly shared in the past has been of incredible benefit to many of us. 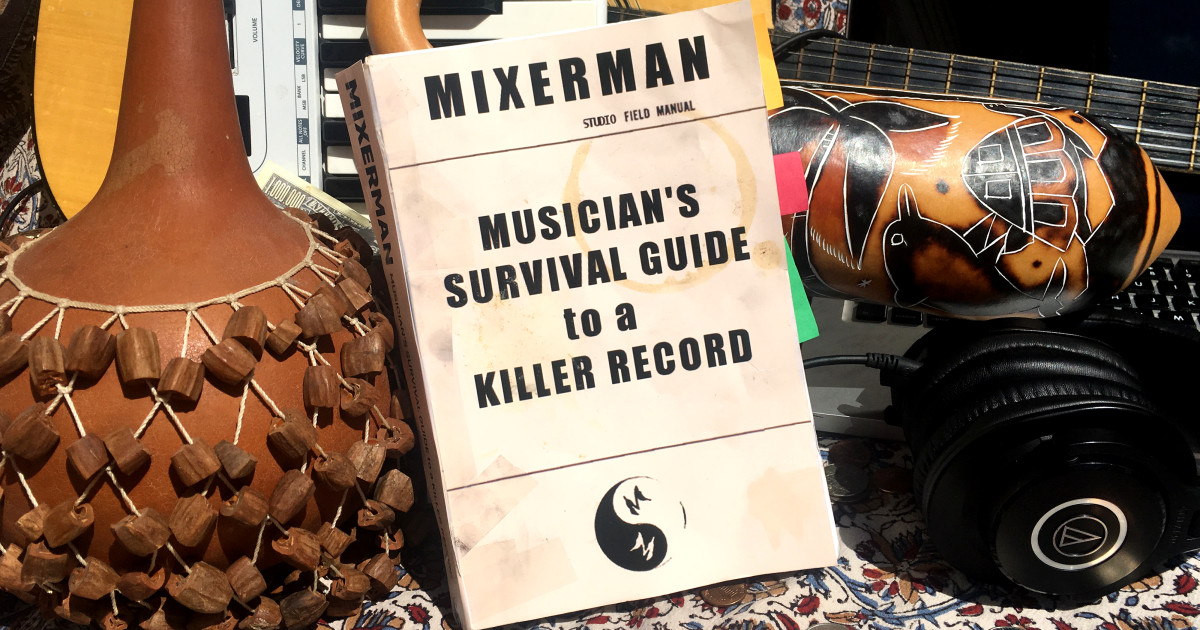 Bring your records to life in a new Mixerman book geared for musicians and artists | Check out 'Musician's Survival Guide to a Killer Record' on Indiegogo.

Thanks Jonathan, I really appreciate you sharing this.

Seriously, anyone who has read any of my books (two of which I posted in their entirety for free), or followed my posts online, I need you to return the favor and invest in at least one copy of Musician’s Survival Guide to a Killer Record. And if you’re an engineer or studio owner you can put it on your coffee table whenever you wish to distract (and educate) your clients. My goal is to make everyone’s life easier.

I own “Zen and the Art of Mixing” and have actually just been re-reading it. Great book!

@Mixerman!! Great to have you here! I’m stoked you found us and hope to catch you on here a bunch. Personally, I learned a TON from your books. Looking forward to checking out the new one.

I’m ordering a copy of the next one. Thinking of doing 2 copies to add one in the prize package for one of our next contests. We just kicked off a series of contests for doing cover versions of chosen song(s) in a given decade.

I’m in too! I’m a huge fan of both educational and satirical books by the man. I remember feeling so lucky to stumble upon the free adventures of mixerman and finding myself giggling like a child every 2 minutes while reading it.

Bought the book and shared the indiegogo page.

I have read a lot of books about mixing. Probably too many, even. While I did learn a whole lot, I find that when I need to learn something technical, it is easy to find a way by myself or find the necessary info on the internet in a few minutes. The most invaluable info I read was not technical, it was about methodology, mindset, hindsight and human feelings. So this particular book looks appealing to me indeed.

@Mixerman side note: I noticed that your are speaking into what looks like a Lewitt Authentica LCT 640 in your video. Do you have a particular opinion on this mic? I like it a lot, just found it could be a bit harsh on some female voices in the hi mids.

That’s my Lewitt LCT 940, and I’ve yet to find anyone who sounds bad on the thing.

That entire Lewitt line is crazy good. And yes, I endorse them (although I’m not sure how official that is these days), but I endorse them because I love the line so much.

Thank you for the kind words and for your support with the book.

Looking good guys!! Seems this book is going to happen!

I wanted to update everyone on the campaign. We are 53% from goal with a week to go. Which is good, but until goal is met, I an’t possibly relax. Failure is not an option.

I’d like to share with you a passage from the book, which I’ve posted on my blog page. Feel free to join my mailing list, and if the writing inspires you, please consider making a purchase.

Recording Technology Has Nothing to do With It

Recording Technology Has Noting to do With It

I’m Noting the hundreds of threads/replies which I’ve bantered with others over this topic, but Noting that now is a real good time for me to shut up and learn something.

Fascinating read. Thanks for sharing.

Congrats @Mixerman on hitting the goal!

Am I the only one bewildered as to why an apparently successful mix guru needs to raise cash to write a new book (as per thread title)…??

Am I the only one bewildered as to why an apparently successful mix guru needs to raise cash to write a new book (as per thread title)…??

No. Its a very fair question. My first assumption was the fundraising was sort of a marketing survey to assess potential interest. And a wise business move to only invest his time into an endeavor that was metrically sound. In other words, it’d assumed it was mostly about risk management.

It seems I was partially right. Eric and I had been shooting emails back and forth for the last couple days…among them was this, an excerpt from a mass response he sent out a few days ago.

“Mixerman’s loaded, he’s worked with all these big albums, he’s made a killing in the music business, why the fuck does he need my money?”

It’s not that I’m unaware of this perception. In some ways it benefits me, because people want to feel like they’re learning from someone really super successful. Which I have been. Then life happens. Then the music business shits the bed along with the entire economy. Then Big Tech takes over every industry, leaving all of us to either adapt or die.

My entire long-term plan was set up around the idea that I could continue to collect royalty checks into my retirement. The royalties are gone, some twenty years earlier than I’d like to retire. I can tell you, everyone has been affected drastically by the devaluation of music. Everyone.

CLA is hawking mix videos with Slate. Former A-listers now Mix with the Masters.These are indicators that the music business has affected everyone’s incomes. Unless you’re Max Martin or one of his team of writers that write hits in a factory setting. Then you’re doing great. Unfortunately, those are not my circles.

If I could sit down and write a book for three months without some kind of funding, I would. It’s way easier to sell book that exists than it is to sell one that hasn’t been written yet.

Music is, and always will be, an integral part of what I do. But music is still a contracting business, and although I can see signs of life, and it looks like producers are going to start to profit-share again through US legislation, I ain’t 30 and I’ve pretty much had my runs.

So, this has been a bit of a conundrum for quite some time. Invariably, the question I ask myself is, can I get back on top in the music business? And it’s ALWAYS about getting back on top, because success begets more success in this business. And unless you’re in that kind of feedback loop, you’re scrapping for gigs just like everyone else.

Writing, on the other hand, has been something I’ve developed for quite some time now, and I think I’m pretty good at it, and I really love doing it. It’s also an expanding venture for me, not a contracting one. But if I’m going to do it, if I’m going to finally make a go of writing as a business, I have to own my product. Because if you don’t own your product in this arena, you’d better have a day gig. Sound familiar? And while I do have a day gig as a producer and mixer, I’m tired of putting my heart and soul into writing a book for months on end, for a little side cash twice a year.

Iso, I decided to run this campaign because it provides me an opportunity to get my writing business in order. If I could do that without pre-selling books, I can assure you, I would have.

Great reply @Jonathan! And I agree. It IS smart to put out feelers and see if the market even wants what you’re after. Makes good business sense in my mind.

First I want to apologize for not returning here with regular updates. I need to get this forum on regular visitation.

I’ve posted a few excerpts from the book these past few months, which you can check out on my blog: http://mixerman.net/Word

The book will be complete by the end of the month, and then I figure it will take me a another month before I have it ready for shipping.

First I want to apologize for not returning here with regular updates. I need to get this forum on regular visitation.