Yep, I’m at it again – have made some connections with fellow guitar-nerd McMurtry fans, which is why I’ve been turning out this series of vids. This one is from his 1995 album Where’d You Hide the Body, titled Off and Running. It’s impossible for me to pick just one very favorite song by this very favorite artist, but this one was something of a personal anthem for me in my wilderness years between the end of my first marriage and having the astonishing good fortune to meet my second wife (we just celebrated 20 years of happy marriage). Playing it on Betty, my recently acquired Guild jumbo 12 string, tuned to double drop D with capo on II for the key of E.

[PS, you can’t see it very well in the vid, but I recently picked up a new capo specifically for 12-strings made by the G7th folks, their “Newport” model. It has a sort of sawtooth profile to account for the differing diameters of the pairs of strings for the four lowest bouts, where the wound string is much thicker than its plain octave companion. Thus one need no longer mash a straight/flat capo down with enough force to do both, which pulls things out of tune in unpredictable ways. It feels totally different too, just not so much force on the capo, making for a much smoother feel – hard to articulate, but it’s unmistakeable. If you play a 12 and use a capo, you GOTTA have one of these.] 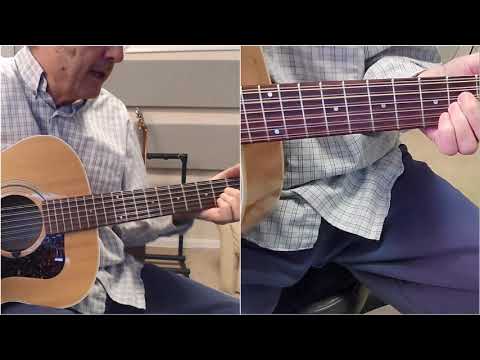 Sounding really good. Would be a nice campfire song!

As I watched the video I was thinking how cool it is to have it along with the music, as opposed to just the audio, then I realized that your face is mostly cropped out of the frame. I know you probably did that because you were unable to move your camera back further but I think you’ll catch more people’s interest if you get yourself situated fully into the frame. Most people tend to be very visually oriented. Aside from that little nit pick, you did a really good job on this!

Thanks guys, and the emphasis on the guitar over my face is very deliberate! I understand visuals help with interest but I reckon the best thing I can do for visual appeal is keep my mug off screen as much as possible…!

Yeah, I want more of your face too. It is a nice face Dave. Your playing and timing is nearly perfect IMHO
First thoughts are "dude make yourself a song " It’s all there bud. How about what you think when observing a starlit sky. No not 186,00 miles per second. ha ha
The ole 12 string really talks to me. Mr tambourine man comes to mind for some reason. Ouch my hands are sore from watching. Where have forum members gone???

Well, the main goal of these vids is to show my fellow guitar-playing McMurtry fans how to play these tunes, I’m under no delusions that they’d ever attract a wide audience. So as long as I get the hands well, I’m good…

As far as doing the covers instead of originals, you know I don’t have as many ideas as you do…! Always been my Achilles’ Heel, finding something to say.