Is this a good spec for recording?

This was a phenomenal machine for it’s time - and it could run Logic Pro 9 (Logic Studio) like a champ. With these specs, you could have run a full recording session back in the day. But 12 years later and you’ll be hard pressed to even run a browser window without throwing errors up.

If you were to try and run any software even from the past 5 years on this machine, it would not be worth the trouble. If you were on the other hand trying to run a machine with only older software on it, it would be as solid as a rock.

I actually have a G4 Powerbook from around 2005. I can run Snow Leopard on it, and it works amazingly with Logic Studio, and an SSD which I replaced the original HD with. But it’s a retro machine more for fun than for anything useful.

Can I ask how much this machine would set you back?

I think I started this new thread by accident. I was going to delete it but I am glad you posted here as well. I hear what you are saying about the age and I am thankful for your input.

I am going to look for a newer machine as a back up in case I can’t get the Windows 7 machine to work.

Does the machine have to be based around the interface that you bought?

machine have to be based around the interface that you bought?

I guess it does, being I just bought it, but if the interface is old too, then maybe I need to look at the whole situation from further back. It all got started when I got sick of unplugging and replugging into the two input interface I have now. I was used to having 8 inputs on my last interface, and I ended up just buying a cheap little interface to get something to use fast. I should of spent more time looking into the interface before I bought it. Now I am feeling like I am stuck trying to work with it.

Don’t worry - I’ve been there too. Bought an interface that I thought would solve my problems, then ended up buying a new microphone and tube preamp to make up for the deficiencies in the interface. It was a stupid 3 month detour I could have done without.

We can look at the situation 2 ways:

2)If you are going to end up going down a road of buying more gear to get your interface to work, then trying to flip it and get your money back might be an option. UAD gear sells really well, and there’s always somebody out there who will buy it, even if you end up losing a little doing it.

If the reviews of the Apollo firewire are anything to go by, you’ve got a hell of an interface there - and from my experience, if your interface is working well with your setup, then you’ve solved a huge amount of your problems before hand. Doing a quick search, something like this could be a possibility for you:

Too much. I’m sure they’d be thrilled if they could get $500 for this.

Even though it was a 2012 and 5-6 years old, it had the same hardware and specs for what Apple was selling in 2017 for easily twice that. Works like a charm. Runs the latest OS.

The other thing is, and I DK why this is true, but you’ll get better performance if you record to an external SSD drive over USB3.

The other thing is, and I DK why this is true, but you’ll get better performance if you record to an external SSD drive over USB3.

Good to know. Thank you.

I am really grateful for everyone’s help and I feel like I am pushing the limit of asking too many questions here. My Windows machine I think is too old and has a small amount of memory, as well as a small amount of ram. I have wanted to switch to the mac for years and I think talking with many of you on here, that now is the time. I am thinking about just getting this machine below. If you all think this a good machine, I think I will get it. The cost is $1,000, but I just sold a UV La-610 for $800, so to me I’m only spending $200 for this machine. Let me know what you all think

Works great with Pro Tools HD10 and other popular music apps or graphic design apps. Over 300 plug-ins installed and activated. Apps shown are installed. Set-Up to work with most all of the popular recording interfaces: Apogee, Digidesign 002, 003, 192, 96, Focusrite, etc. The HD & 002 & 003 drivers are pre-installed for use with Pro Tools and other DAWs.

There are some scratches and normal wear on the computer. Everything works properly. This is a very quiet, fast computer. Great for recording with music apps or for graphic design projects. Only includes power cord. No keyboard or monitor. Very good condition. Tested & everything works great. 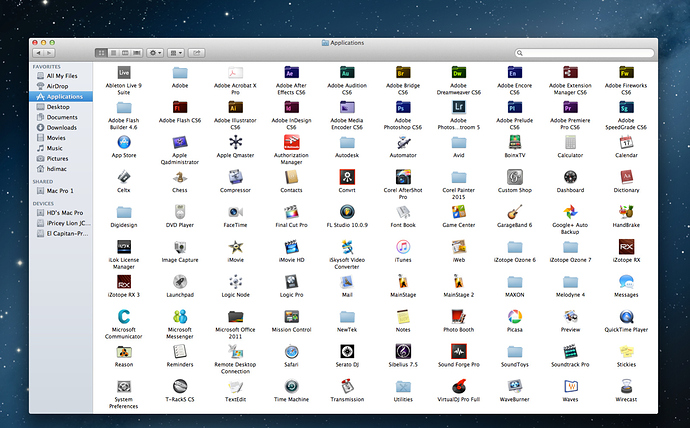 This was one of my dream machines for years. I used to covet this machine and actually go and try it out at my local Mac store all the time! For a 10 year old machine the specs are still quite good.

I’m normally the guy who family and friends call before they lay down cash on a new laptop / computer. The first rule I give them is this: Work out what the machine is being used for, and then add some more jobs to that list. If the machine you get can’t do those jobs comfortably, then you need to look for something more substantial.

With the Mac Pro 5,1, you’ll get to Mojave, but not any further without “hacking” a newer OS onto the machine. But that presumes that you’re buying the machine to keep it up to date with the latest and greatest software. If on the other hand, you keep the OS where it is, and the software where it is and don’t worry about updating stuff, this machine will easily serve you well for many years. Add to this that it is quite a upgradeable machine. You can upgrade the CPU, the RAM and the graphics cards, or replace them if they break. So all in all, it’s a great machine to make music on if you have stable software running it, and don’t need to upgrade.

Thanks for the feedback. I just bought it and I will have to get used to it as I have never used a mac before. My guess is there will be some time just getting things hooked up.

Congrats! Been a Mac user for 2 decades now - love everything about them apart from the price…

If you have any Mac related questions - would be happy to help.

Just something to be careful about when it comes to buying old Macs is that Apple is pretty happy to make their hardware obsolete pretty quickly. They do this to keep things moving forward, but it also makes their old stuff obsolete pretty quickly. I have a macbook that won’t run Chrome any more because I can’t update the OS, and the latest version of chrome can’t run on it. It’s basically a brick at this point even though the hardware is perfectly capable of running basic software.

I have tons of costumers that are still using very old versions of Pro Tools because they have 10 year old computers that can’t run anything newer. Mac users are the reason I still have to support RTAS plugins.

Good to know, It’s a crap shoot it seems no matter what you buy. If you buy new, you can’t use your old stuff with it it seems either.

Just something to be careful about when it comes to buying old Macs is that Apple is pretty happy to make their hardware obsolete pretty quickly.

True - but as a Mac user since 2000, I can say that I’ve never seen computers that can be used for as long as they can. As long as you look after them, I’ve known MacBooks and Macs to be fully functional for a decade. That’s insane when you think about a computer’s life.

As far as updating and software goes - I think there’s a couple of philosophies you can work with. You can go with the latest and greatest, which with any device is going to force you into updating every few years. Or you can go with the steady as a rock philosophy, where you set up your machine to work, and then don’t change a thing on that machine.

This is quite frustrating as of all the technologies, you’d think a web browser would be easy to keep up to date but the pace of web technologies and security, it seems like the humble browser can be a deal breaker when trying to use an old machine,