Is the end near for Gibson? 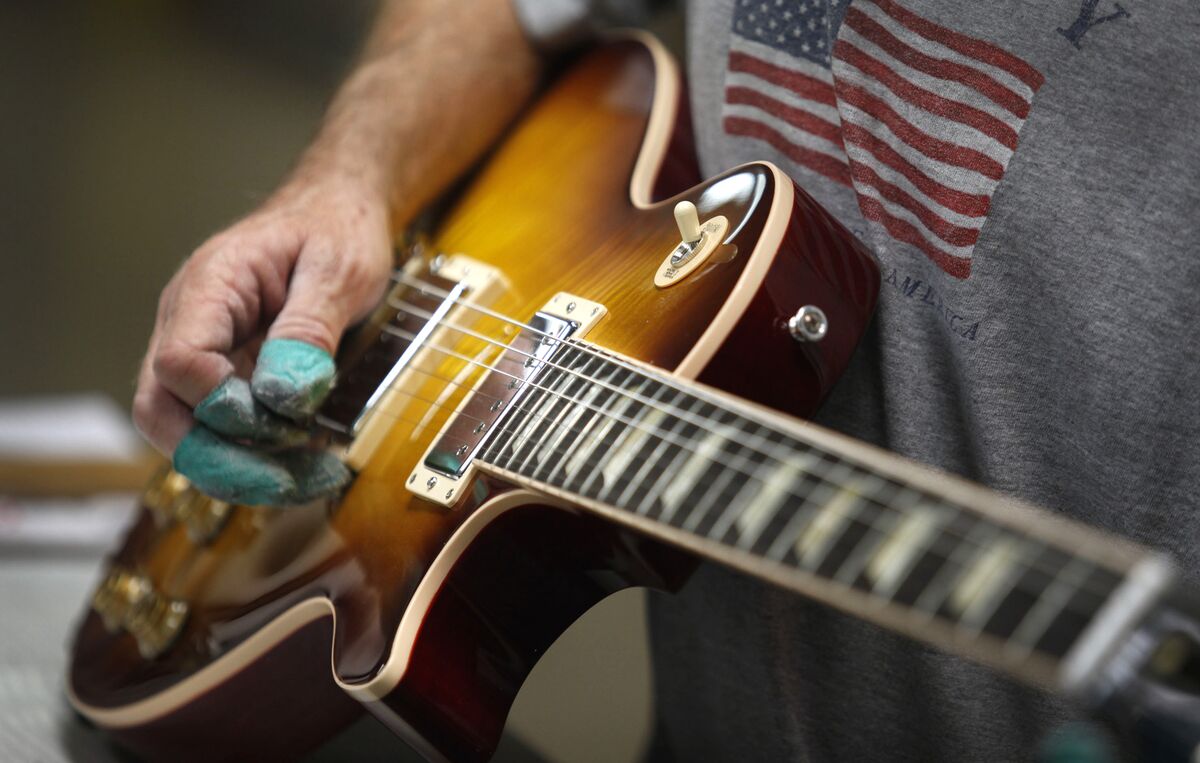 CEO Henry Juszkiewicz traded a slice of Gibson’s soul in an attempt to become more than just the maker of the world’s most beloved guitar.

I think the idea of trying to become the Nike of music was a bad path to go down (obviously). I think Gibson was only 30% evil. To be Nike, you have to be willing to be 90% evil if you want to compete on that scale.

My own personal issue with this whole thing is, if I see a Gibson brand on anything other than a guitar, it immediately screams low quality and over priced. It just seemed too obvious that their goal was to slap a Gibson sticker on everything and pretend that it meant quality.

Gibson has brand dominance in guitars. I think they still have that. But off the top of my head, I can’t think of anything else they do. They buy out company’s and stick their sticker on it. That doesn’t provoke any sort of brand quality to me.

I’ll have to sit down and have a talk with my Gibson Nighthawk, while my guitar gently weeps.

Is this the one? I just watched this about 2 weeks ago.

I think this will be a good thing. I think there is enough brand equity there for them to stand a chance a re-organizing in bankruptcy. I don’t think Gibson will just disappear. Do you?

Is this the one? I just watched this about 2 weeks ago.

8:59 - The only people who can buy Gibsons are doctors and lawyers??? I got a kick out of that.

I think the idea of trying to become the Nike of music was a bad path to go down (obviously).

I think it was possible. They just did really really wrong. IMO, Bose is proof that you can build a lifestyle brand around a music related object. Yamaha and Sony don’t count. Yamaha and Sony are electronics conglomerates that happen to be very very good at making music related things. Bose is the only true lifestyle brand I can think of that built its brand on its core product.

It just seemed too obvious that their goal was to slap a Gibson sticker on everything and pretend that it meant quality.

Ha! True that! What I don’t get is how Bose makes some awful shit but they have managed to keep themselves associated with a sort of aura prestige that Gibson seems to only have undermined by their own stupidity…like those horrible self tuner systems and putting a baldwin piano logo on their Les Paul pick guards. Or stuff like this: 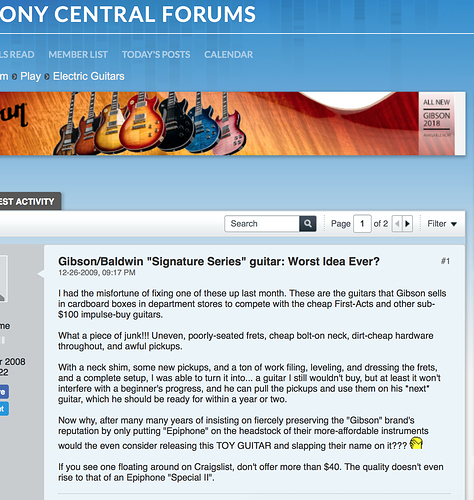 I can’t think of anything else they do. They buy out company’s and stick their sticker on it.

Worked out about as well for them as it did for Trump lol.

I think this will be a good thing. I think there is enough brand equity there for them to stand a chance a re-organizing in bankruptcy. I don’t think Gibson will just disappear. Do you?

I really don’t know, I lack any kind of business acumen. It does seem to be a common theme that when a company who built their stature on some core competencies decides to dilute those in a major way, that it often doesn’t go well. Not always, but commonly.

My only direct experience is with two guitars I own. One is a mid-1990s Heritage 535, and the other an early-2010s Les Paul '60s Tribute. Heritage, as many are aware, is the company formed by the former employees of Gibson’s Kalamazoo shop back when Gibson left town. These are the same people using the same exact gear used back in Gibson’s heyday. My H535 is a gorgeous instrument that I love to play. The LP, on the other hand, is good but not great. In particular, it has trouble staying in tune, which is very annoying. It’s also US-built and I do like the P90s a lot, but I find I don’t reach for it nearly as often as the 535. However, I hasten to add that I tend to keep slightly heavier gauge strings on it for use playing slide.

So this is not a really apples-to-apples kind of comparison, but it gives some inkling that is consistent with the many writings that conclude the company’s quality has declined over time… Not a good combination of circumstances with a decision to branch way out from the pillar of their success.

If you have an LP that has tuning problems, there are two major things to check. #1 is the angle the string makes coming out of the nut, especially on the G and B strings, which seem to hang up more frequently. If you haven’t done it, take it to someone who will widen the exit slots and lube them up. The string typically hang up on the inside edge as it exits the nut due to the friction caused by the angle, and it takes about five strokes with the right sized file to fix it, along with a little nut sauce or pencil shavings. The second is locking tuners if you don’t have them. Once the string is locked and stretched, the only place it can move is within the nut, which hopefully is now smooth and nice.
Gibson should be okay eventually, but they do need to reinvent themselves to get back to where they were. If they could develop a competitive version of an LP or SG that was affordable like an Epiphone, instead of trying to sell $3,000 guitars, they would be back in the mix. For instance, my PRS SE is about a $400 guitar, and plays very well, has a very nice finish, and after fixing the nut and tuners, plays every bit as well as my 71 LP custom. That’s a problem when the current version of the LP is $2500 and up, and includes stuff people don’t care about. Fender captured the “everyman’s” guitar market with the Strat, and the American made versions are about half of what Gibson wants for an LP. If they want to keep exclusivity in that segment of the market, fine, but make a bulletproof version of an LP Junior overseas and sell it for under $500 with a beautiful finish, and you have an instrument that represents the Gibson brand properly and allows younger players to support the brand. Those younger players will eventually buy the better guitars down the line if they aren’t excluded the first time around.
I just don’t see the possibility, especially with all the vintage Gibsons around, that the brand would go away. They just need to get it into their heads that the majority of the market in terms of number of guitars sold will never be at the $2500 price point, and start making guitars that sell on performance and playability instead of trying to reinvent the wheel.

Thanks Bob, that is great advice on the tuning issue, I will check that out for sure. Much appreciated.

I got a Gibson idea recorder built into a guitar cable. Really cool product if it was half the price. It sold originally at $100. Rebranded Tascam of-course.
I am probably more sore that Gibson acquired Sonar and put it in the ground. Seem to be doing the same thing with Tascam as well.

Another piece, this time in the NYT. 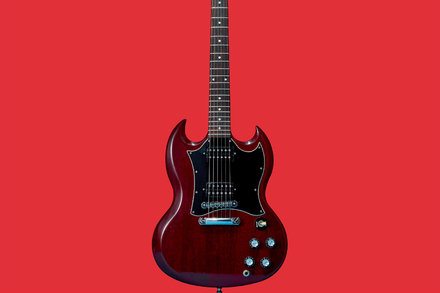 Is Gibson, a Totem of Guitar Godhead, Headed for Chapter 11?

Times have changed, and the maker of the Les Paul and the Flying V is on the ropes. Can it sustain?

By the way, there is a device available that fits on the headstock called The String Butler, which puts roller bearings between the pegs and the nuts to take care of the string angle. Check out videos of that too, it looks fairly interesting and would be easy to DIY. 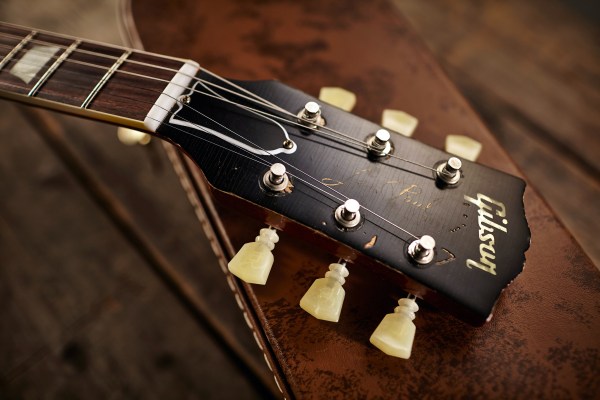 Company will refocus on its musical instruments, shedding its audio and home entertainment business 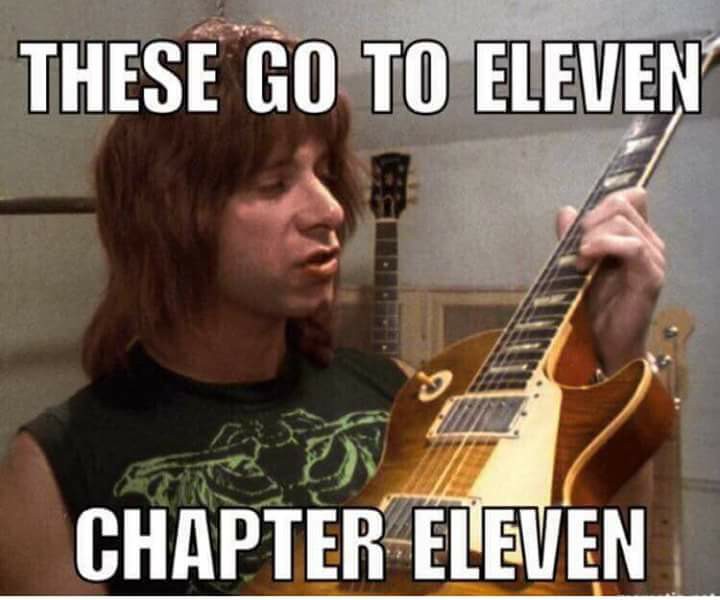