Will take a while before I get the rest ready, but I thought I’d share the track already. Maybe I made some mistakes that you can point out to me

What’s the context of the channel?

Basically music production. From my band(s) and hopefully other bands

And ofcourse some of the usual stuff, like reviews and instruction video’s but then in dutch probably. Cause I don’t know any Belgian orDutch guy that realy does it consistantly.

And ofcourse some of the usual stuff, like reviews and instruction video’s

So you mean a YouTube channel, or some other kind of site? Cool theme song / intro, but there’s something weird in the stereo of the drums and maybe something else (could be guitars). It’s like parts are cutting out left/right, or AutoPan is on or something. It’s driving my ears crazy trying to figure it out. There’s some crackling sounds at the end too, when the rest is silent. You should probably cut or fade-out the end anyway, as soon as that cymbal decays, so when you put it in the audio track for a video the segue is very quick.

Seems it might need some subtle eq… I dunno

I put a copy of the left guitar with a bit of a different sound and high and low passed it a bit, to the right - 6 db or something compared to the original, and the other way around. The crackling at the end is normal, its an effect

. Was a bit stoned yesterday not taking it too serious.

Overall, it’s a bit on the boomy side in the low end. Vaghan’s eq moves seemed to remedy it for the most part, though.

Oh, I have to pay attention then next time

And indeed there seem to be some issues there.

I recently checked some of my mixes at my parents home. I recomended the smallest version of the yamaha HS speakers to my mom as desktop speakers, and it seems that thay are way more honest then my stupid “phonic” speakers that some dude recomended me 15years ago

So its seems that my mixes could improve a lot if I spend some cash on other speakers. Gonna be my next expense probably. But it will have to wait until the end of the year

Just out of curiousity, could you maybe make a screenshot of the EQ curve that you made on this ? Just trying to imagine how you think when approaching that move

If thats a reasonable question

There is no eq curve as such, just vintage knobs with little numbers on them.

There is no real logic to it, its multiple plugins I like the sound of, after a few beers after work… I add stuff, then may take it away: so sometimes you see two frequencies very close to each other, or apparently contradicting each other.

If I was using my Pultec Eq, which I like a lot, I would really be screwing with your head, as you can boost and cut the same frequencies, (they have different curves). 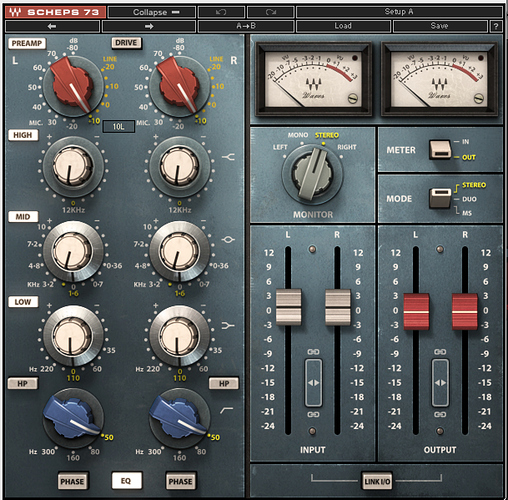 so sometimes you see two frequencies very close to each other, or apparently contradicting each other.

I think I know what you’re saying, but care to elaborate on that ?

I do hear the “problem” though

I guess mine sounds a bit too honky.

Its not a technical thing, I just listen a couple of times while I put on stuff I think will improve it, (mostly eq boosts like the ones above in the pic) then go back to the original and compare. A lot of the time its just a lot of tiny things I can barely hear but seem to improve the guitar or drum tone a tad.

(Some of the eq’s I have are fixed frequency or badly labelled, so I don’t really realize I’m boosting it twice in almost the same place, until I back one or both of them off again - but not always to zero).

Then I make tiny adjustments here and there… some give and take (but mostly minimizing what I just did first time around), and then stop and print it. Usually in 10-20 minutes start to finish. Sometimes, I don’t even listen to the whole thing, I just make a compromise over it generally.

I never get my own mixes right first time ever so I don’t worry about it, I usually come back to them after a while, sometimes days, and then give them the ‘20 minute’ treatment.

Then I might even check to see if it was better.

I dit some EQ on the bass. I think its closer to what you did now.

cool, sounds better, I did a few minor tweaks to the bottom end for ya too, since you seem to like that.

Maybe look at trying to lift the ‘veil’ in the top end, compression can often do that (dull the top end).

Yikes, even my M2 sounds a tad overdone (bass end) on my Adam studio monitors.

This is the M3 mid-way version, suitable for computer speakers and maybe even normal people… you decide.

Its hard to tel lfor me

I don’t have great monitors, and my only other reference is my hifi speakers. Not that they are bad though.

Got a pair of B&W 640i hooked to a denon pma-1060. They sound awesome for listening, but, although they have great lows, not so defined so I can realy get in to it. At least it takes some time before my ears are warmed up

You probably want something that will produce just enough bass, but not too much.

Probably a pair of these, or something similar.

Ive used JBL LSR series in the past and they are quite decent.

My 7" Adams are currently configured with the tweeter level and the 6kHz both down a little and the low end up a touch to get closer to my headphones.

That seems to help quite a bit.