I posted this question in the Cubase forum as well. I’m trying to import audio tracks into a Cubase Pro 9.5.3 project template that has several folder tracks. Importing the audio seems to work fine to tracks not contained in a folder, but when the importing process gets to tracks contained in a folder, it doesn’t import to the tracks within the folder, Cubase creates new tracks at the bottom of my project and imports the audio to those tracks. Why doesn’t Cubase allow audio import to a track contained in a folder ? Is there a preference setting that will allow this ? Thanks in advance for any help. Steve

How are you importing them? Which menu and screen are you using to do this?

but when the importing process gets to tracks contained in a folder, it doesn’t import to the tracks within the folder,

Do you see the audio being added to the bin?

I tried to attach a snip-it, hopefully it’s showing up. Track “Jay” was imported onto it’s corresponding track, but Tracks HH1 thru HH9 were sent down to the bottom of the project on newly created tracks. Why aren’t they importing to the next available track below “Jay” ? 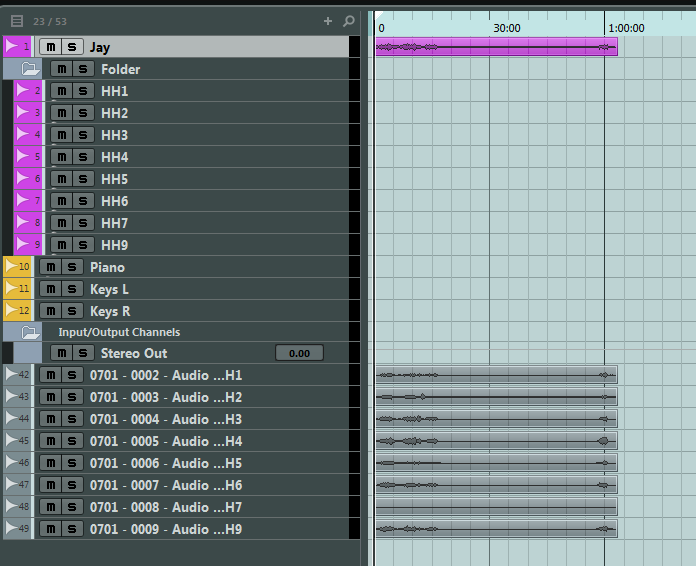 I have not used Cubase in years. If you don’t have too many projects to do this with you could take the tracks imported at the bottom and create a new folder for them.

Paul - It’s actually a weekly 32 track mix that I do for my church’s weekly service that gets synced to the video for broadcast. It’s not a huge issue but I thought if it’s just a preference setting or something then it’s worth a try. Thanks.

Ooooh! I don’t know if that’s gonna work. What is the church using to capture the audio with? Are you mixing on the churches in-house computer in a post production suite, or are you taking it on a hard drive back to your house and transferring it?

If you are moving it to another computer on a hard drive, have you tried manually dragging the folder of captured audio into the bin and then once the wave-forms have been re-drawn doing a select all and dragging to the template?

For church broadcasts with regular clients, I use this thing: 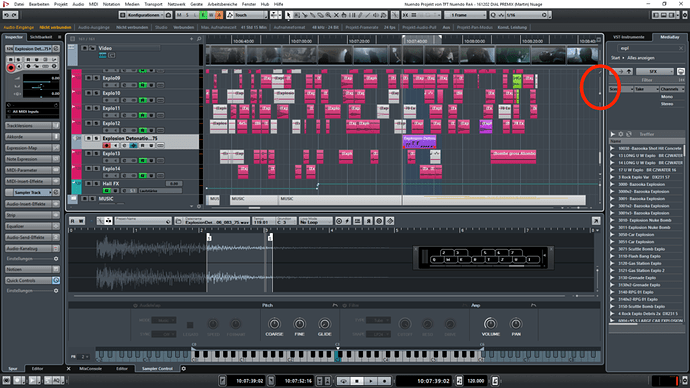 When the slider is up, it allows you to drop the files all at once onto the track window, then when you hit that slider button down it switches it back to the layout/order you want them to actually be in to mix. That can be an easy way to drop the audio in, then make it revert to the actual mix layout you want.

Thanks Jonathan. I don’t think that’s what I’m needing but I appreciate you responding. The down arrow that you circled controls the “divide track list” function (which won’t help in this situation) and the slider, at least in 9.5 controls the size of the wave forms for better viewing/editing. What I’ve been doing, which is fine, is importing the tracks off my hard drive, then building my folder tracks manually. It only takes five minutes so it’s not a huge deal, I just thought if it’s possible then why not ?? Even if I drag and drop into the template it does the same thing so I just use the import function. Thanks again for your time my friend !! Maybe I’ll add this to the feature suggestion thread on the Cubase forum. Steve

and the slider, at least in 9.5 controls the size of the wave forms for better viewing/editing.

Ok. Then that has a different function in Cubase than in Nuendo. Sorry about that. I don’t have a copy of Cubase installed.

Maybe I’ll add this to the feature suggestion thread on the Cubase forum. Steve

Do it! If they add that feature I’d be stoked. I wish there was an easy way around this so us people who try and import church sessions could go strait from one rig into a folder dependent template. Sorry I wasn’t much help! But great questions. Thanks for taking the time to post.

I think the options for Import Audio are just to either import the audio files to one track or to separate tracks? When I’m importing I don’t have existing tracks that I want audio files to go into and I just drag them from the bottom into the corresponding folders.

As for the “Jay” track… I’m wondering if it’s because the file name matched the track name? As for the HH tracks, it looks like they have different names than the track names. Honestly I don’t know if Cubase works that way though so that’s just a shot in the dark. If you have processing on the HH tracks you could just import to the Pool and drag them into the tracks too. It’s all extra steps though so I get where you’re coming from.

I may do a test when I get home, I’d be interested to see if Cubase would make the link between file name and track name and put the audio there.

Blair - Thanks for your reply. To be honest I don’t think that Cubase matches file name to track name. The only reason I say that is because when I import files, with no folders involved, Cubase will place files onto tracks with non-matching names with no problem. I’m going to test this out though when I get to my studio just to make 100% sure. Either way, like I mentioned in a previous post, this isn’t a huge problem. It takes me about 5 minutes to set up the folders once I’ve batch imported the files. I’ve just been doing it that way for a long time and one day I thought, “Why am I creating folders after I import ? I should have the folders already set up in my template, that way everything is ready to go after I import”. Lol Thanks again though for the reply !! I posted a request for this feature on the Cubase 9.5 Feature Request section of their forum just in case. Steve