I got a new mic, what do you think?

I really struggled mixing my voice on my last track (Blinded,) so I bought a new mic. It was cheap, only $115. An Oktava MK-319. I did a test between it and the Rode NT1A which I’ve been using basically forever, and I really preferred the new mic! It helped me to tame some of the harshness, and stand out in a slightly more saturated yet still pleasing way. That’s how I heard it anyway. Anyway I’m sending the tracks to someone else to add background vocals (instead of mine) and to do the production, so it’s not going to end up like this, but I guess this is sort of like my solo version.

But yeah I was skeptical that mics made much of a difference, but it really did! Maybe this mic is a good match for my voice. I used the Rode NT1A on the guitar. (Still need to fix a couple timing issues on that.)

I’m not sure I mixed it that great, but I tried. What do you think? It’s a cover of Taking You There by Broods.

sounds good to me! vocals crisp and clear. Guitar a bit boomy but not sure if it was recorded with this mic or not.

just read it , it was lol a bit boomy but could be a different issue

to clarify, you used the MK on the vocals and Rodes on the guitar? - i have attention issues everyone knows!

to clarify, you used the MK on the vocals and Rodes on the guitar? - i have attention issues everyone knows!

The guitar might be a bit boomy… I wanted to highlight the bass notes, because otherwise the track wouldn’t have any. Maybe it could be more defined though.

It sounds like you need to pull your mic back from the guitar though, or at least not point it in the direction of the soundhole. Acoustic guitars get some really pronounced body resonances around the 100hz mark, and it sounds like that is what is happening here.

I get that you want the acoustic to be “full spectrum”, but those low notes are really booming out on my sub and they are clouding up the rest of the frequency spectrum too - so much so, that the low end of the mix sounds very uneven.

I had a bit of a play with the acoustic sound and was able to improve it a bit, but it involved fairly savage high passing followed by multi-band compression:

…so the simplest route is to fix it at the source - find a mic technique that gets a more even capture between the low and high strings, and be careful that the proximity effect isn’t boosting the bass unduly. Even so, a fingerpicked part like that might need some additional compression/multi-band compression to even it out sufficiently.

This video has some good suggestions:

Different microphones can sound wildly different from each other. With enough work, you can get two mics to sound pretty similar to each other, but then it all falls apart when you move distance or angle.

Some mics just sound better in more situations, and it makes life a lot easier.

I don’t mean to plug him, but @YoDudeRock builds mics. He’s pretty nice with pricing. If there’s something you’re looking for in the future, he can probably build it for you and get it to you cheaper without going through ebay. He’s built a U47, but that’s an expensive one. Here’s a modestly priced modified beauty. He also does mods if you don’t want to spring for a new one entirely.

Hope I’m not breaking any rules. Let me know… Hey guys, I modded two MXL 990 Blizzard microphones. I replaced the cheap 22mm capsule with a 35mm K67-type capsule (similar to the ones in U87’s) and boosted the voltage to match the new capsule. Here’s the eBay ad, make me an offer. Thanks, Chris (YoDudeRock) P.S. I build the Hairball FET/Rack 1176’s too. You can find them on ebay also. I would give a $90 discount if I sell one on here rather than eBay. Their fees are kinda crazy.

Thanks for that! In my mix, I actually had the low end boosted with a shelf, and the high end cut with a shelf, (on the guitar.) I think I just wanted too much bass out of the acoustic.

Oh also I had a reverb on there that I’m sure was adding to the low end.

I tried taking these things out (and putting the reverb on an aux track so I could add an EQ to it.) I think it sounds a lot less boomy that way, more like your example.

After watching that video I realized I don’t make an effort to angle the mic away from the sound hole, either. I knew that was a problem area, and I tend to point the mic at the 12th fret or so, but I didn’t pay attention to angle it a little bit away from the sound hole. So I’ll keep an eye on that next time. I think this should be mixable though, especially when you take out my EQ modifications haha.

I have a Rode NT2-A. The NT2-A works great on instruments, but I have never really liked it on vocals, seems too clean.

Glad you found a good choice for a great price.

Yeah i am digging it.

Was bored and felt like writing violin harmony to your vocals (comes in around 1:30 fyi)

just the violin part (feel free to use if you wish

also as I was sifting through your track, I notice your vocals coming in too close to peaking in certain areas (they don’t actually clip but they come dangerously close, if there is a limiter, might want to double check the settings. Beautiful overall!

Thanks for doing that; it sounds nice! The person producing it actually added a cello part, as well as some other things. I’ll pop it in and see if it goes with the rest of the production. 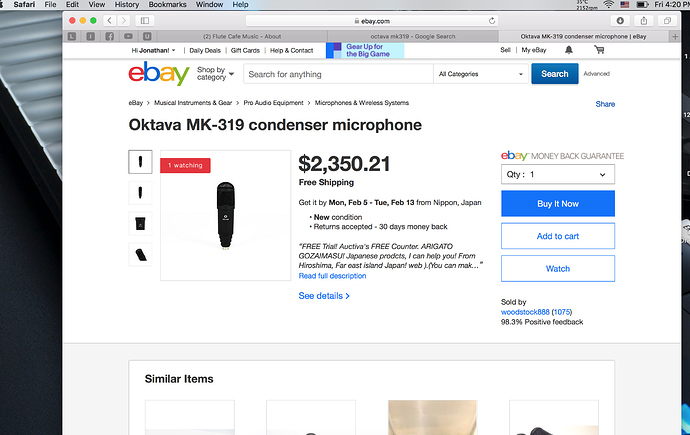 Haha I actually saw that one when I was shopping. I was like… “did some famous person own this mic? Is it modded to all hell? Are there diamonds in it?”