How do you connect external effects to a mixer and a PC?

I work with a digital mixer (Roland Vm-3100pro), connected via optical cable to an RME-9632 soundcard, installed on a PC.
I use the mixer for the inputs and outputs and other than that I do everything “in the box”.
Lately I got my hands on a old Yamaha sampler (A-2000) that has some very nice effects. And that’s how I want to use it. As an effect module.
My main question is how could I run already recorded files through the effect module and record it back on the Cubase?

Google ‘cubase external effects send’ for propper info as i prob goofed up the explination .
Its deffo in the manual though dude.
What version of cubase are you running?

Thx for the answer LazyE,
I was trying to connect it a different way using only the mixer and it was creating a feedback.
Never thought of using the other I/O of the soundcard. It only has a stereo line In (RCA) & a stereo line Out (RCA) but I guess that’ll do.
I was going from the Aux sends of the mixer to the inputs of the effects and from the outputs of the effects to another channel on the mixer. And when I routed that channel to go in the soundcard I got the feedback of course.
I am running Cubase 5.

Still no luck connecting those things…
Anyone has any experience with RME-9632 and external FX?

You need an audio interface with enough I/O to do what you need, that card is an all in the box deal.

You could buy a good interface for what you’ll spend with expansion cards if you have the room for them:

But I have those breakout cables (BO9632CMKH) and also (BO9632).
https://www.rme-audio.de/en/products/cables.php#2
So, I am thinking, since I’ve connected the mixer with the soundcard via optical, shouldn’t those RCA Line Ins & Outs of the card do the job with the exterrnal FX?

Yes if you have a S/Pdif connection and your external fx has S/Pdif I/O then that should work.

Unfortunately, the external fx doesn’t have SPDIF. (only by buying the optional panel)
But I was talking about the RCA Line Ins and Outs that aren’t used.
Couldn’t I use them as send/return?
From the RCA line out (LR) to the input of the external FX and from the output of the FX back into the RCA line in (LR)?
Shouldn’t that work?
Because I tried it but I couldn’t get it to work properly.
I could hear some the FX coming in but with some feedback or blended with the original signal. I don’t know exactly what was wrong…

That’s routing inside that mixer, right, that’s where you have a stereo pair of inputs and outputs that are RCA? Have to see if it can do that.

But yes it should work. When you hit VSTconnections in Cubase you would need to add an input bus and a return bus or set that up as an external instrument. What shows up when you make a new bus, what’s the list of available I/O? Does those RCA jacks show up there?

Not sure of the capabilities of that mixer.

Sorry if I wasn’t clear Tacman.

So let me sum up to be clear and see if we can get a solution:

I am going
Out of the Mixer into the RME (optical)
Out the RME back into the mixer (optical) and out of the mixer into speakers (analog).

So that leaves the RCA ins & out of the RME free.
Free are also the AUX sends as well as many channels on the mixer.
The FX has only analog I/O.

When you hit VSTconnections in Cubase you would need to add an input bus and a return bus or set that up as an external instrument. What shows up when you make a new bus, what’s the list of available I/O? Does those RCA jacks show up there?

Yes, those do show up!

That should work then.

Been a while since I used cubase but lots of info about how to set up an external effect, like this one: 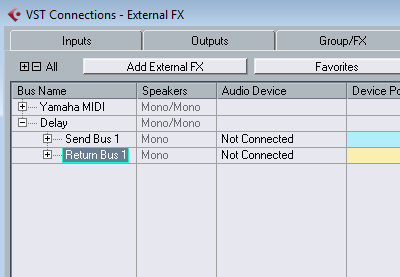 Let’s go back to the past, when all you had was a tape machine, some external effects, a loop machine and reverbs. Getting nostalgic? Some engineers still prefer to use that gear to add originality...

You could do it manually, like create an input bus and an output bus then set a tracks output to that bus and then make a new audio track and set it’s input to the return RCA and monitor the channel.

But it’s a lot cleaner to make the external fx.

Finally SUCCESS!!!
The problem was lying in the software of the soundcard.

I muted the hardware input of the totalmix in the RME software and I was able to record without any feedback.