Hoodwinked by an engineer

Hi guys, I need your audio forensics skills in this here situation…
I have recently bought one of these camcorders, and I love it…

Last weekend I was filming some of NZ’s best blues talent at a nearby festival, more as a test than anything else. I am good friends with the owner of the venue.
The board was a Soundcraft SI Impact - and the engineer is known to be “moody” to say the least. However, I was pleased to learn I could get two XLR channels from the board, via a split cable that he had put in. There wasn’t time to ask too many questions.
When I came home after the Friday night, I was horrified to hear the result on the camera. That evening it was three different guitar-vocalist performers, and the recorded vox was definitely clipping.
There was no clipping on the camera itself, as I understand it. The gain dial was set to 1.2 out of 8 and there was never any red-lining on the meter. The only thing I found odd was I needed to select “mic” instead of “line” on the camera’s input selector - there was no noticeable signal when “line” was selected.
The video quality was great, the audio was bad.
The next day it went from bad to worse as there were several large bands, with trombones, saxophones and lead guitars - loud drums. The signal was never clipping on the camera and when I tried lowering the gain further, the signal basically disappeared. So I put it back to the 1.2 value.
It also sounded horrible in the headphones as I was monitoring the music… the sound from the Bose Array speakers was better, even though it was technically too loud and also boomy at times. There was also sounds of clipping, especially from the main vocal mic, a Neumann.
I asked the engineer if the mix I got to the camera was a special mix - he said it was not, it was the same as the main mix, he said. However, listening to my mix it appears it was stereo.
He had also recorded sessions into wave files, which I got hold of. They were MUCH quieter and mono.
Anyway, here’s my Exhibit A that something weird is going on… 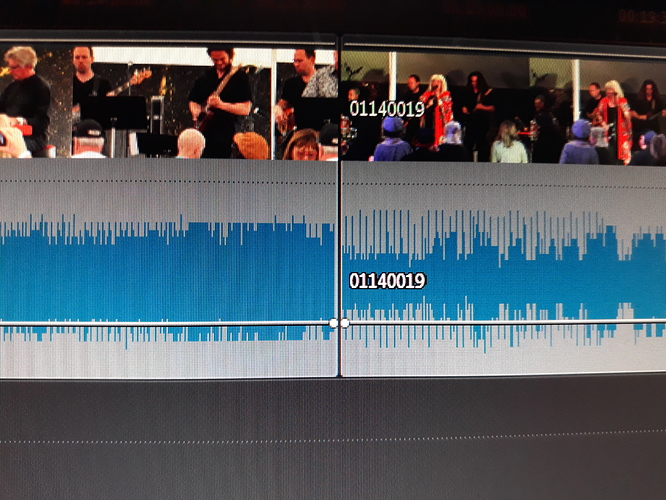 The section to the left is heavily distorted when you listen to it. Not surprising when you see the even “lawn-mowing” cuts across big sections… there are still some spikes, could be the snare?
The section to the right sounds absolutely fine… this was recorded much later in the evening - and I suspect the engineer realized he had some wrong settings somewhere and corrected it… the signals on that section look much more natural and they also extend beyond the left part in amplitude.
I think the engineer was running the show with something clipping in the signal chain somewhere, totally screwing the sound - at least the mix to the camera. Unless there’s something really basic that I have misunderstood…

What do you think?
Adrian?

Also - I just did a “clipping” test on the camera. Hooked up an AKG D5 and yelled into it so the camera meter redlined… when listening to that, it sounded FAR better than anything I had recorded at the festival.

Was there any chance that you accidentally had the L+R audio input selected to “INT” and you were recording with the built in microphones ?
It’s not too hard to overload internal mics at a loud event.

Interesting topic. I had this issue several years back when I was trying to help a local band get a good live video when they opened for a national act. I think the sound guy intentionally made the signal too hot.

No, it was definitely using the XLR feeds…

Yes, that is a possibility here also. Either intentionally-intentionally, or subconsciously-intentionally…
It could be worse though, it could have been an official job - but now it was just a test. Still, many of the performers have asked to have video of themselves… I have to see if anything can be rescued.
I guess the lesson here is to not “outsource” anything unless you know you can rely on the person… to take active control of all components…

What do you think?

A couple of things. The FOH engineer should not have to pay attention to the recording. His job, and his only job, is to make sure it sounds good in house.

What audio inputs do you have on that camera?

Is the mixer sending a line or a mic level?

The board was a Soundcraft SI Impact - and the engineer is known to be “moody” to say the least. However, I was pleased to learn I could get two XLR channels from the board, via a split cable that he had put in.

I wonder if he gave you a post-fader feed and not a pre-fader feed. The volume level on a post-fader would vary as the L+R main bus out is adjusted through out the performance. I’m hoping that he used a splitter transformer and not just a cable with two parallel pairs of xlr ends.

He called it a splitter…

This really sounds like a mismatch in the output of the board and the input of the camera. I’m also leaning to a problem between a mic level and live level. Back in the day, I used to work in a school that had a 3 camera setup in an auditorium, where for our first ever 3 camera broadcast we decided to do a live feed(!), which was simultaneously being shown live during the performance, streamed on the web and being recorded. I wasn’t in charge of the web stream, but I was actually the director on the night, so sound wasn’t even my remit. The night itself went beautifully. Filming was spectacular, and we were proud of our efforts.

Come time to mix the nights audio, and we had exactly the same experience of you. Nothing was not distorted. It was utterly heartbreaking. What made it worse was that we’d put all our eggs in the basket of the sound desk. So, we had disabled the audio of the 2 other cameras, and basically were relying on the camera capturing the audio of the night. In the end we just shelved the recording because it wasn’t salvageable.

Come the next event, I can’t even tell you how many audio feeds we had! We captured the sound from the desk, all three cameras, plus a couple of portable recorders as well (including the gorgeous Zoom H6). It was a headache to mix, but it was a really nice touch to be able to mix in the ambient sound of the audience when they applauded but near enough remove them from the mix once the dialogue or music was on.

Thanks, I will certainly need to plan something like that for next year’s event. The owners have already booked me in for it.
What confuses me with my situation, though, is what you see in the image I posted. Nothing was changed on the camera between the two clips. The clip on the left is distorted - the clip on the right is not.
I think the engineer changed some setting during the night?
There was no space or opportunity to speak to him about this - and he wouldn’t have taken comments of a critical/enquiring nature well…

I think you need to tap out of his board from a different place. What outputs does he have that he’s not using? Preferably, your mix would be pre-master fader. The last thing he needs to be doing is worrying about what your mix sounds like.

His board has 16 XLR outputs. Is he using all of them? Is there a reason why he split the output instead of using 2 of those?

This topic is what sent me the direction of transformer splits of all the inputs when I started live recording years ago. Even with me doing the mixing at FOH it is difficult to get a single pair of outputs from a board that doesn’t lack in some area. Either the pair is too loud, too soft, not a good mix or some other combination of these. Remember that the engineer is providing “sound reinforcement” not necessarily a “mix”. He or she is taking what is coming off the stage and adding enough of everything to get a good FOH mix. that is not always the same as a good two channel mix.

About the closest you will come to a good mix from FOH for a recording is a big festival with the FOH tent out 100’ or so from the stage. In that case the stage volume is least intrusive on the engineers mix. Even then it is a crap shoot based on his or her skills and the FOH speakers. Remember, speakers that lack in frequency are going to require more EQ to sound right, which will effect the mix coming to you.

If you are looking to do this on a regular basis, get a split snake and an interface with a laptop. You will be able to properly mix the set after the fact and what the engineer does will have no effect on you. The next best think is if the engineer is bussing all of the inputs, you can grab the 4-8 busses and record them. It is not ideal but gives you just a bit more control over the post production mix.

Thank you, that’s a great explanation. I was obviously caught in a fantasy that said “if you get two cables from the board it’s got to be good…”
I don’t see myself doing a lot of this, but next time I will record with my own mikes in the position you mention…
Sven