Hmmmm. What chord is this?

Was getting this ready for a wedding prelude this weekend. Its not often that I run across a chord and scratch my head trying to decide what it actually is.

Looking at the second chord with the Eb root… 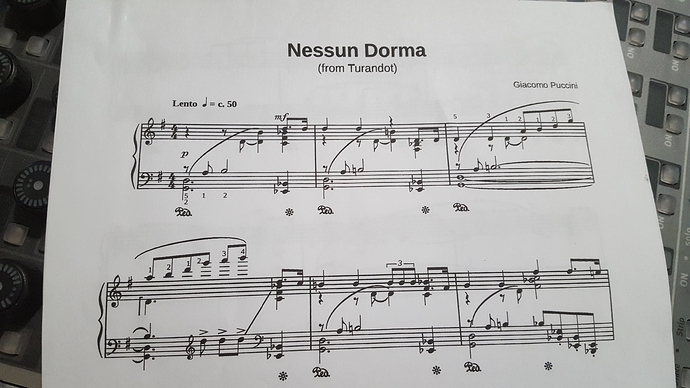 Looks like an E-flat diminished icky with an add 9.

In other words, I’m clueless

If you need more than 10 fingers to play it, then it’s an alien chord.
Otherwise it should be fine - just play it.

Wait a minute!! Do guys say icky??? Looks like a D sharp augmented 9th capo’d up to the 27th fret

… as Jonathan asks himself, why did I bother asking these guys again…??

You mean a flatted minor 6? Possible… Eb, Gb (F# enharmonic), and Bb seem like you could go that direction. The D♮ in the top voice is kind of an irregular 7th then… and it doesn’t really fit into any chord label I can think of.

I also looked at calling the the D♮, F#, and Bb in the top 3 voices a D+ chord, then thinking of the C♮ in the bottom as a 7th… So D7+5…but the Eb in the left hand throws a bit of a wrench in that idea. Honestly, by the time you put D7+5/Eb in a symbol, you probably defeated the purpose of attempting to name it. I think its a miracle that Puccini got it to function harmonically.

Hmmm. That Gmajor to Eb-ish thing re-occours through the entire aria. Its a pretty song. Don’t get asked to play this stuff at weddings much! It’ll be a fun gig this weekend.

Here it is in context

I wasn’t crazy about the Paul Potts performance…Did watch it though as a I was learning the song. However I’m glad this style of music is still getting recognition in todays pop-culture.

I can’t stand listening to stuff with such crap sound quality as the Pavarotti video…
Overall, the Potts video is 50 times less painful…

Oh, I agree…the sound is much better on the Paul Potts video. I just liked the way Pavarotti sang it better. Don’t get me wrong…the accomplished classical singer isn’t always better. There are a number of times when you took a classical vocalist out of their element, placed them in broadway, jazz, or pop, and it was an amusing experiment but sounded awful. I just mentioned it because the Pavarotti video was the first one that came up when I searched