Having some trouble with bass levels on this song

Can you guys take a quick listen to this mix minus here? I’m trying to tune the bass and having some trouble figuring out why it doesn’t feel right. I was unable to get the specifics of the gear…the producer doesn’t even remember who the session player was. Its definitely through an amp, and there’s no DI. Here’s the signal chain…the last plugin a Decapitator (Ampex drive, 100% wet, boost 1db)…I also cut 2db of 350 at the end of the chain though its not in the picture. 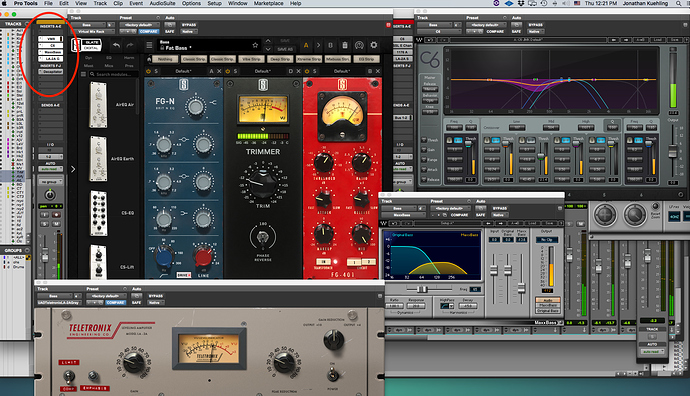 The kick is hitting consistently -3 dbvu on the 2 bus soloed, then raises evenly to 0 when the soloed bass is added to the soloed kick. The Waves Maxx bass is attenuated so there’s no volume change in applied. The LA 2a at the end is only shaving off 1-2 db.

I may not be able to chime in until later today or tomorrow, but if I was going to try to give you some advice I’d want to hear also the bass track solo’d with processing, and then bass track solo no processing. I think part of it is how the bass is being played. It’s a pretty active ‘walking’ bass and doing hammer-ons or slides up high. So it’s pretty dynamic to begin with. Depending on what you want the sound to be, and what this track/song will be used for, it seems like the bass could have more articulation and clarity. I mean, I can hear it, but it seems to be a featured instrument without coming across as featured. (?)

My guess is that the high bass runs are leaving the low octave empty, so it’s very difficult to get the bass feeling consistent, and it kind of messes with the groove just a bit too much. Additionally, when he hits that big low note at 7 secs in your clip, you get lots of sub bass - maybe a tad too much.

Here’s my suggestion: It comes from an article in SOS about Jaquire King producing the Kings of Leon: https://www.soundonsound.com/techniques/inside-track-kings-leon-sex-fire

Regarding the bass, he said

“I also used a very old subharmonic synthesizer, the Dbx Disco Boombox, on the DI. Jared plays a lot of melodic stuff very high up the neck of his bass, and to be able to keep the weight of the track I synthesized some additional low end.”

I did a quick and dirty impression of this kind of thing by adding a sub synth bass just to those high notes in the clip you posted, then mixed it in underneath until the high phrase and the later, lower notes sounded more even in my sub. The first iteration of the riff has the sub bass, the second doesn’t, to illustrate the difference:

I’m not even sure I’m addressing the specific problem you’re hearing, but that’s my take on it - hope that helps.

I mean, I can hear it, but it seems to be a featured instrument without coming across as featured. (?)

I’m not even sure I’m addressing the specific problem you’re hearing, but that’s my take on it - hope that helps.

Eh…thanks…to both you guys. I’ll play with it some more tomorrow!

Yes, those slides, especially, sounds like attention getting - instead of giving the song what it needs…

I’m trying to tune the bass

Can you explain more accurately what you are trying to do?

Here’s my suggestion: It comes from an article in SOS about Jaquire King producing the Kings of Leon:

Thanks man! I think that’ll get it. Thanks a ton…and that really helps. And neat article too! Looking forward to going back through it later today when I have some time

Can you explain more accurately what you are trying to do?

Just get it to sit clearer and thicker in the mix overall. It needed some more definition…it was filling up space but wasn’t as polished as it needed to be. I think that trick Andrew just suggested will allow me to carve some definition into the tracked bass (which will take bottom out), but the added subharmonics will replace certain ranges in the lower spectrum that I thought it started to lose when I tried it earlier. Then we have a foundation to keep building the rest of the song on. Basically…I was needing ways to keep it heavy but even it out without it having noticeable amounts of over processing.

It is good to be without talent, cuz it sounds deep and full to me. I could hear new kid in town in there.

It is good to be without talent, cuz it sounds deep and full to me.

But it was muddy… When I tried to clear it up and make it feel more controlled, it thinned out. What Andrew suggested was to use a plugin that would improve the clarity and make things sound more even, without making them sound thinner

do you ever split the bass into 2 or 3 freq ranges and process them differently?

I have seen people take the lower end of the bass and limit it more or even use something like Waves MV2 to keep the low end really solid, not too loud, not too quiet and really consistent. Then process the higher end of the bass to cut thru or poke out when u want it too

do you ever split the bass into 2 or 3 freq ranges and process them differently?

I do this all the time, but I’m almost always handed a separate DI track. I know you’re not supposed to do this but I handed in a rough of this the other day with a heads up to the producer that I’m having trouble with the bass. I have it ballpark enough to where I could automate EQ everything else…the tweaks should be minor once I get this under control, but day three on this mofo, and I still and having trouble for some reason. Oh well. Happens to all of us.

I have seen people take the lower end of the bass and limit it more or even use something like Waves MV2 to keep the low end really solid, not too loud, not too quiet and really consistent.

I tried the lo-air, but didn’t think about the MV2. Just booting up the session now…I’ll give it a shot.

Its feels like I don’t have the same amount of wiggle room on this one. I think I’m hearing a U47 or some big round tube mic infront of a 4x10 cab. Doubling seems to work a lot better on a DI bass combed with a cab than it does with a strait mic on a cab, and the other problem is that I have drum bleed through the bass mic. They were in the same room when they were tracked live.

I’ll post an isolated clip of this in a sec…

Just get it to sit clearer and thicker in the mix overall. It needed some more definition…it was filling up space but wasn’t as polished as it needed to be.

It’s as clear as a bell to my ears. I would have thought the last thing it needs is definition - I’d be looking to calm it down a bit. It could stand a drop in level by about 2db to 3db within the mix, that would be my starting point - and that would probably reduce the space it’s filling.

I’d be more concerned about the anaemic kick myself. It sounds like a pat on the bottom of a baby wearing a nappy (diaper).

I’d be more concerned about the anaemic kick myself. It sounds like a pat on the bottom of a baby wearing a nappy (diaper).

Cool! Thanks…I’ll take a look at this too…

Is anyone else getting an absence of kick on your guy’s systems too?

Edit…I forgot I was gonna upload an update here. Probably need it reference it in full context this time. I’ll have to toss it on a p.m. then invite everyone to the thread (so it the song doesn’t show up publicly), but I’ll get the vocal in there in there too this time.

Is anyone else getting an absence of kick

It’s not an absence - just an anaemic sound.

Welp, there’s my treatment for the anemic kick. I tried a transient designer to make it less anemic and it screwed the groove up. I tried a decapitator and all it did was get flabby. So I CLA’ed its ass and it made it punch through but kept the groove and maintained the basic tone. 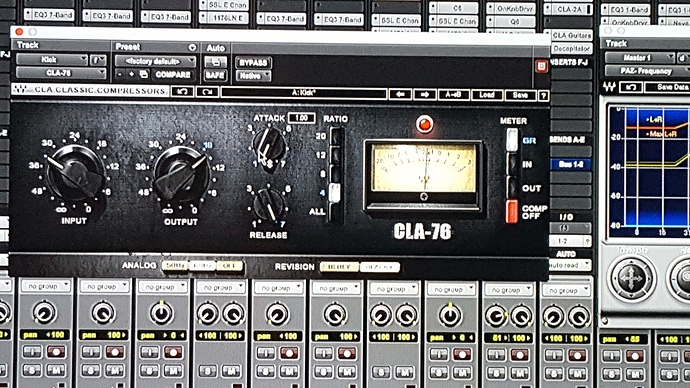 Then I added 800hz to the snare, and punched it harder into the all drums ‘crusher’ channel and it fattened up.

I’m out of time on this one…gotta hand it in tonight. Mastering engineer in Nashville is booked to start on it tomorrow. Thought I had another week but the label called and said the need it now.

Aw shit. That’s too loud now. Sending him another version with the kick down about 3db. I’ll let him pick which one he wants to work with.

Sounds good - what did you end up going with on the bass?

Its still not perfect, but I’m out of time. I cut my losses and tried to work around it. I muted the slate plugins and replaced the Neve at the very beginning of the chain with a UAD. That’s really all. I would have liked it to be a little punchier and clearer, but I just couldn’t get it there…I had closed up a 12 hour work day, and I could tell by that time last night that I needed to stop or I was probably gonna start making mistakes that would have made it worse. I think when I raised the Maxx bass level, it compensated for some of the 700hz boost that I lost (and forgot to add back in) when I muted the Slate FG-N. I wanted that 700 there, I literally forgot to add it back.