So I now tried to copy that with what can offer home-studio (here I use GarageBand for its wide amps and stomp boxes panel).

Would you have any tip from what I got or what I missed (no edit, no comp or EQ on guitar and bass tracks).
Many thanks for stopping by!

I feel you are close enough ,in tone, to pull off the energy on this tune.

I would love to lay the vox down for you on this, though I am without a recording rig at the moment. Working on getting a rig here soon.

here I use GarageBand for its wide amps and stomp boxes panel).

Hell, I have been using garageband (on ipad) to satisfy my noisey needs, I wonder if there is a way to share files through GB? I wanta do this I wanna do dis!

It sounds interesting… would you like to get separated track to play with? (yeah, they are loops

Plus, I didn’t know that the regular song isn’t the Butch Vig’s mix…

Hell, I have been using garageband (on ipad) to satisfy my noisey needs, I wonder if there is a way to share files through GB? I wanta do this I wanna do dis!

I really don’t know on that stuff… I saw that GarageBand file from iPad could be shared with the Mac software, I don’t know if the opposite is available
(opening, the software and there is an share to iOS option!)

So, do you want the file I did to play with?

So, do you want the file I did to play with?

Hell yeah! Let me figure this out ,I’ll PM ya

No need to PM, here it is

Edit: I shared the file for the desktop software and not for the iOS app (I didn’t know if you’re able to open it)
I did export the file for iOS to have a look but it’s just a render of the mix with some very few metadata…

Sent the files from my phone to Ipad, trying to get it to work.

Aww dang! This is not the whole song? Crap.

Aww dang! This is not the whole song? Crap.

I don’t know how the song looks on your iPad…
Yep, I did record only that loop because I’d like to get that kinda live performance thing that make the sound (no edit, raw recording).

My main focus was understanding the amp, mic and stomp box choices for that massive guitar sound.
It could be another step but it needs to get better drum sound/playing since I only create 1-measure loop for that purpose.

Maybe you would record such thing?

Why is this happening? 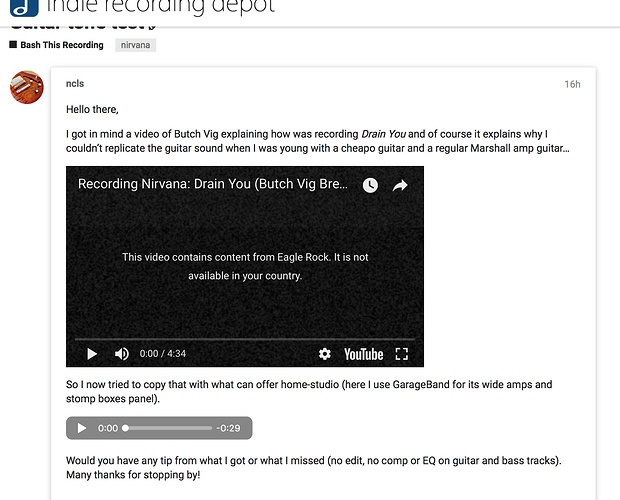 Yeah, it happens, without any warning.

I uploaded it for you:

By the way, they are many other ressources about Butch Vig talking about Nirvana. I think this video was uploaded on Youtube many times.

Oh Shit!! Why did I put that there! It’s not even built yet. Holy hell. Changing that.

Ok changed it. Getting a little ahead of myself there. Wow. I think I’d added that when I sent the payment to the web design company just not thinking.

If you want to get closer to the Butch Vig guitar sound you’d need to brighten it up a bit. Probably a little 3k and maybe a little around 1.5k. Of course, you’re probably not using five different tracks.

Wow you are close. Good job!
To be super close to the tone, I think you should be using the same guitar. Not sure if its a Jaguar or a Strat but i think a strat would work.

If you’re not in it for the joy of tweaking and just after the “sound” itself, you may wanna try cab matching the tone from the multi-track stems. I think the tracks of Drain You is out there. Just my 2 cents

Thanks for your reply and tips.
My main goal was to learn how that sound was built, and specially with that video in mind, to see if it’s that difficult.
Obviously it needs mixing and mastering to match the end result.

Again, thanks for stopping by!

I also think those guitars were better at that task.
I only use the bridge humbucker pickup to mimic the Cubain’s Jaguar.

I listened to your mp3, and I think it sounds pretty close to Nirvana. I wouldn’t know how to make it sound any closer than what you have.