Getting a broadcast ready voice

I’m seriously thinking about making a podcast for absolute beginners and bedroom engineers. I’m still a good 6-9 months from being ready with the first few episodes, but I’m looking for some solid advice here.

On my YouTube channels, I record my voice clean and EQ the low end out, and have it “mobile” friendly. I know that most people watch my videos on their phones and tablets.

For the podcast I would love that FM style voice. My voice is deep-ish - not James Earl Jones great but it’s not offensive.

So I’m looking for good advice on how to get that broadcast ready voice. How do I remove that background noise that seems to be on my voice recordings? What kind of compression / EQ / limiting do I need? It’s a world apart from mixing vocals into a song. There’s no drums or bass or guitar to EQ around. Just my voice and nothing else!

These articles may be helpful:

Thanks very much for the links - really appreciate it.

So I’m looking for good advice on how to get that broadcast ready voice.

How do I remove that background noise that seems to be on my voice recordings?

Run the Izotope de-noiser on it.

What kind of compression / EQ / limiting do I need? 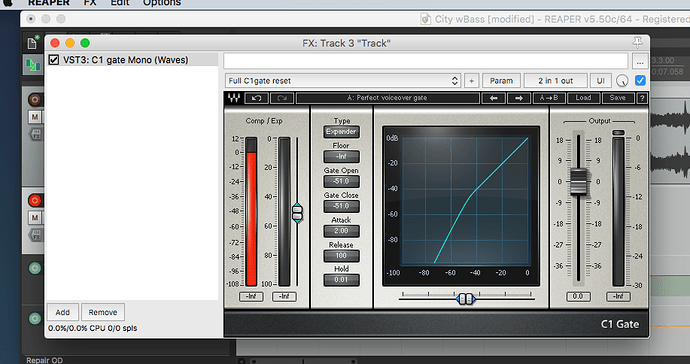 For limiting, my go-to is the Izotope - IRC4 - running in fast-transient mode.

I pretty much stick to Waves and Izotope for metering also.

The trick to doing broadcast VO, dialogue editing, ADR, etc… is to have the discipline NOT to try and eq and compress. No room processing, no transient design, no vocal rider, no verbs, no saturation. You want the dryest most organic thing you can possibly achieve. Think of your job to mute channels and move faders. That’s all.

What kind of mic are you using for the voice work?

I’m using a Rode NT2A, into a Behringer U-Phoria interface.

Not that you want to throw more money at it, but rather than throwing plugins at it to clean it up, you may want to consider using a dynamic mic instead of a condenser mic. SM7B or SM57 for example. They are a lot less sensitive and will take a lot of the room/background noise out of the equation.

I think proximity can be an issue for an SM57. The 7B has a little more give there but its about 3x the cost. If I were doing VO for the particular application @madpsychot mentioned in the OP, it would come down to how much noise I was up against. Chris Lord Alge and Dave Pensado use clip on mics. If I had to do this stuff I’d use my Shure Beta 53 because I don’t give a rip how it looks and I don’t ever want to have to think about where it is. Furthermore, it has an ideal proximity rejection and one shot from cmd+U (strip silence) could take care of an entire hours worth of editing monitor bleed out.

Ok - its six months on… are we there yet?

The SM7B and RE20 are the FM broadcast standards, maybe the RE320 would do the trick for less money… im not sure…the SM57 is not great for spoken word, too many plosives. My Electrovoice N/D 967 was way better, I didnt try the N/D 868.

Obviously, a condenser or ribbon mic has more ‘reach’ and can stay further out of shot.

As others have stated get and RE-20 or SM 7b. I like the RE-20. With barely anything else you can get radio type voice. Get close to it with a pop screen cut some lows and add some MV2 a little noise reduction and bam!. A client of mine does the same thing with an sm 57. He has a stellar voice and it sounds fantastic to. I don’t have a stellar voice and it the re-20 does wonders. I have been interviewed on the radio many times and only about half of them use a re-20 or sm 7B. Most of the smaller radio stations use cheap LDC’s with a windscreen sock right over top with multiband compression and they are fine. When I am interviewed on the radio I always make sure I get right in on the mic so you sound more like the announcer than typical guests do that stay about a foot away.

I feel quite nice that you lot are checking up on me! I’m not quite there yet - a bit of real life has interfered with my plans!

I am ramping up my YouTube channel, and am thinking about creating another one just for fun. For that I’ll need a broadcast ready voice as I’m aiming for high production value in that channel.

I’m not quite in a position to fork out money for a RE-20 or a SM 7b - they are the mics I see every “YouTuber” talking into, and to be fair half of them are shockingly mixed for sound.

I have managed to get my voice sounding good with Nomad Factory’s AS Rack. I’ve tried Scheps Omni, and Izotope, but for some reason when I stick an AS Rack onto my vocal channel it just works like magic. I’ve got the compressor, the EQ, Noise Gate and De Esser switched on. I’m not doing anything too fancy, just touching up my voice a little. With this setup, I’ve managed to get a really natural sounding voice, with that FM radio “boom” sound. I’m a little behind in my day-dream life as I’m in the process of interviewing for a new job and that’s going take me away from sitting and recording for a little while. But the videos I make for work, so I really want to work on getting my vocals done with minimum fuss or faffing.

I will keep my eyes open for a dynamic mic - if anyone’s got a suggestion for a reasonable budget version of the SM 7B or RE20 I’m all ears. Once I’m in the position to spend the money, I’ll definitely go for one of those.

Did I mention the Re320 was a ‘budget Re20’ ? I havent compared the two but maybe there are reviews out there.

The cheapest mics for FAT FM bottom end and delicate, detailed response from a little distance are ribbons, they can be had for $100 upwards (check out T-bone from Thomann in Europe). They also look extremely cool on camera.

Other cheaper dynamics I like are the Electrovoice N/D 767a - sibling to my favorite ND967 and a much smoother version of the SM58. If I had to do a radio show or recorded spoken word gig for multiple speakers (individually mic’d) and needed to order a bunch of cheap dynamics to do it, this would be it.

If I had double the budget (in the same situation) and wanted more clean articulation, I would go Heil PR35, every day of the week.

edit: EV ND76 is a new EV cardioid mic, maybe a cross between the supercardioid ND767a and cardioid PR35, judging by reviews.

Can you add some kind of back-round music? Something soft to override the noise at the pauses?

It’s funny. One of my students was watching a video for a lesson and accidentally switched on some drum and bass in another tab and then called me over to listen to my instructional video on databases with some rather 90’s music in the background. It sounded great!

For one of my channels I won’t have background music. For the other channel there definitely will be.

After looking for second hand SM 7B’s and EV R20’s I gave up that notion. I find in Holland trying to find these specific things can be impossible. But I did see a review or two of the new Rode pod-mic which is essentially the same principle as the previously mentioned mics. Obviously it’s not going to be in the same league, but it’s built with the same purpose in mind and is a dynamic mic. I’ll give it a good go and see if it does the job.

like all the above a nice preamp helps, the BCD 1 has the capsule like the SM7b, with the bump in presence… but up close it sounds pretty good and has the PodCaster/Broadcaster thing down.