This is more directed to the individuals/ bands/artists that record their own music for fun and not necessarily do it for a living.

There is a big push to have a “studio” or “recording space” setup . It seems to dwell on the same talk of having a treated room, awesome monitors, and enough gear to make the recording process noninvasive to the creative process.

This is the tried and true staple of the recording world. It has its advantages, like being scalable depending on ones budget, The studio is always setup and ready at a moments notice, and can be setup to scientific measurements that will produce expected results…no surprises and you have a reliable baseline for any noise you wish to create.

What if you do not fit into this catagory? I find myself with the space , time to build it, and the money to put a workable recording space in my home, but I fail to ever pull the trigger. Maybe it is because I am not a working musician, too lazy, or I cannot commit to having something concrete. Hell if I build this then I HAVE to use it.

My creative juices do not flow like some artists do, the moments are too sporadic and mostly can never be forced. I would feel ashamed of having the space and never using it, kind of the same way some people get pets and just chain them outside and never allow it to enrich their lives…just take it for granted, meanwhile some little kid would just DIE to have that same very animal in their lives!

With this and the fact that my noise-ventures(music) only seem to satisfy my obsure taste and usually is just for my own amusement, I will be content to having a laptop ( that is portable) a small audio interface (that is portable) a bluetooth speaker (that is portable)and my audix i5 mic. I will not feel ashamed because someone has triangulated tweeted monitors and enough padding on the walls and corners to stuff a generation of transitional trans-gender tit slings. I will strive to use what I have to gain the most emotional content in my “songs” that I create AND if my needs ever change, so I may too.

The beauty of the times we live in is that either scenario has its own set of challenges, and yet both can make great music.

The beauty of the times we live in is that either scenario has its own set of challenges, and yet both can make great music.

Amen! I am content with my iMac, Reaper, Scarlett Focusrite 2i2, AT2020 condenser mic, and Amplitube 4 for recording in the bedroom studio. I have a friend across town with a “real” studio if I decide I want super sonic drum space. lol

To me, a dedicated studio space only makes sense because I spend all day in here. Really, I think the main purpose of any recording rig should be to make it as easy as possible to record something when you are in the mood, and not have other stuff get in the way.

If sitting on the toilet is the most common place for me to want to lay a vocal down, then it would make sense to me to have whatever setup works to make that be conducive to recording vocals. Whether it’s a mic stored in the cabinet behind the toilet that can plug into your phone, or a fully built desk in your bathroom, I don’t think it really matters. So long as you can get to it when you need it.

For me, hanging guitars on a wall is way more conducive to playing than storing them in a case. I can grab a guitar in 2 seconds and start playing. If it was in a case, it would require work to actually get it out and play, and I would play less. Having an interface close to my desk where I can plug in a guitar and start recording quickly is way more valuable to me than having a tracking room with big amps.

So whatever setup works for your needs and helps you record without getting in the way is the setup you need. Whether that’s a big old studio or a laptop is up to you. I think the debate about quality is pretty much irrelevant at this point. You can get good results on a laptop with a small interface.

Excellent points made. I hope everyone that takes the time to make their individual space, goes into it with the thought of

Amen! I am content with my iMac, Reaper, Scarlett Focusrite 2i2, AT2020 condenser mic, and Amplitube 4 for recording in the bedroom studio. I have a friend across town with a “real” studio if I decide I want super sonic drum space. lol

It’s nice having access to space if you need it, yet able to mix from the comfort of your own home.

Yeah, one of the reason I do music less and less nowadays is that my “studio” is in a crowded living room, and when I need to record acoustic guitars, I have to move things around.

For vocals, I used to do the same thing, with a mic on a stand with a portable booth + gobos and mattress but I had to dedicate some time to even think about recording. That just sucked.
Now, I’ve set up an articulated arm stand on my desk, to hold an SM7B and when I want to record vocals, I just put the mic in front of me and press record. It might pick up a little bit more room/noise, but once in a mix, I can’t hear the difference, so it doesn’t matter,
This has helped me with vocals though, since I’m not afraid to redo a take that needs it anymore…

A dedicated place or some way to record without too much hassle is a must for sure.
When you don’t have that, you use VST instruments and amp sims, etc…

For vocals, I used to do the same thing…

Ah! Well, fact is that the bathroom sounds pretty awful with the tiles…

I remember thinking (when I first tried recording) it’d be cool to record the singer in my bathroom because of the “great acoustics”… Anybody that heard the song said “was he singing from the toilet?”. Bathrooms are pretty obvious

If I hear “But Les Paul did it” one more time, I’m going to go insane. I can’t think of the last time I heard a song that was recorded 60 years ago and thought “oh man, I really wish I could get that sound.”

I can’t think of the last time I heard a song that was recorded 60 years ago and thought “oh man, I really wish I could get that sound.”

There are definitely people that try to achieve that though. Not sure why, but they do.

oh wait. I kind of take that back. I can admit that I’ve had a lot of fun with spring reverbs. Something about they way they sound on vocals is pretty cool.

Boz, you might have said this on RR, do you design your plugins in your studio? I can just see you working on a mix, something goes wrong or you are just getting a snag with a plug and you fire up the plugin5000 machine and crank out a work-around on the spot. Does it go down somewhat similar?

Yep, pretty much. My recording machine and my development machine are the same thing. Usually if I’m working on a song and I feel like I need a plugin, I’ll make a quick ugly prototype. Then if I find myself using it a lot, I’ll keep working on it and adding stuff that I think it needs. If I find I don’t really need it very often, I just throw it in the junk pile.

Usually in the process of trying things, you come up with new ideas. T-Bone came about because I wanted a tilt filter in Imperial Delay. I made a prototype tilt filter plugin to test the algorithm, and realized I liked using it, so I added a few things and made a plugin out of it.

Have you ever thought of letting others in on that junkpile? Sometimes getting a different perspective on something you did can bring new light to something else.

Yes, the problem is that I don’t have any guarantee of stability, and they are only 64 bit windows VST plugins. Here’s one that i made a long time ago. It’s the only one I could find that is in at least a somewhat usable state. It’s a voice doubler. The controls don’t make much sense and if you stray too far from the default setting, it kind of loses it’s thing. 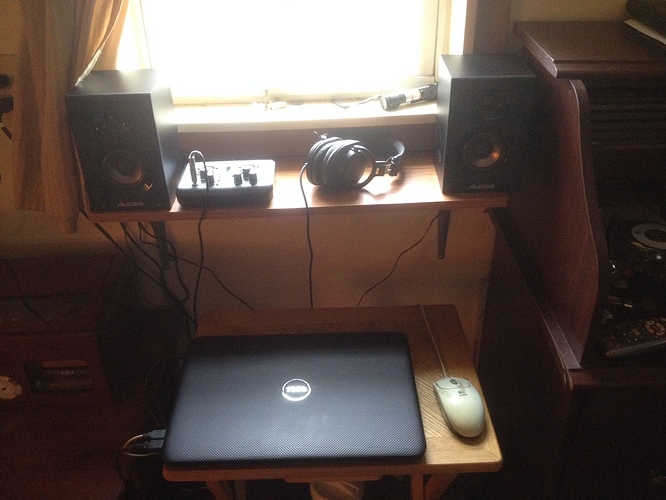 This was my “studio” when I moved into the box. I called it my $59 studio because the interface, the monitors and the cans were each $59 on ebay or amazon. I could still get away with using it except I started to hit the limits of the processor and I seriously aggravated a problem disc in my spine hunching over the laptop…

I still take the laptop down to the basement “more proper” studio to track drums and live gtrs and it does fine. I have it networked with my main computer and to a port on my workbench. SO I could actually mess with mixes or do daw housekeeping while I’m working on a repair…

Waiting for the glue to dry…

Hell yea! that is way fancier then my set up at the moment. Ha!

This is more directed to the individuals/ bands/artists that record their own music for fun and not necessarily do it for a living.

There’s some validity to this thread even for guys that DO this for a living. I recently set up a small rig to learn the new keyboard on and to go through a months worth of training videos on Massive, Omnisphere, Zebra and a few other synths I’ve been wanting to learn for a while. As @bozmillar mentioned, I get a lot more done when I can get to stuff fast. It takes almost 10 minutes to turn on and boot up the entire rig. If I just leave the computer running it probably takes 30 seconds for a standalone virtual instrument to load. I’m also spending some time starting to practice again, since I plan on playing again soon. I usually use Addictive Keys to run finger drills, scales, arpeggios, and Hanon drills. Its almost like being able to sit down at real piano and just…well…play it 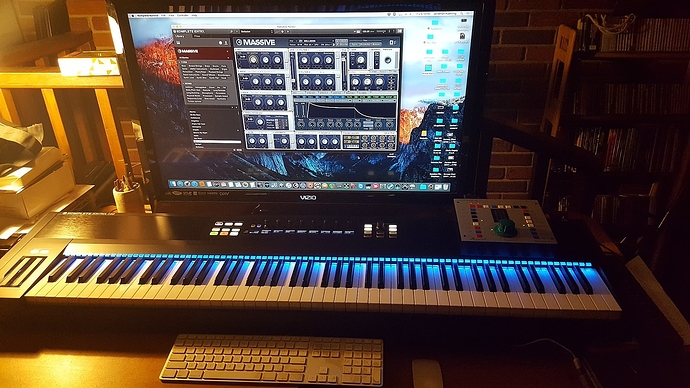