Forgot my old user name and password! called getting old and forgetful, New tune I wrote using Reaper I would appreciate some constructive feedback please thanks in advance

Balance of instruments is nice. There seems to be too much verb, at least to my tastes, and the low end feels muddy to me. I can’t tell if it’s the eq in general, or possibly the eq on the verb that’s clouding up the low end. Maybe high-pass the bottom of the verb, esp on the vox.

I like the drums. Would love to hear your instrumentation. Amp sims? How’d you record the guitars? Bass? A lot of nice stuff here, man!

Thanks man appreciate the feedback.

Cool, I like this better. The “punch” at 1:17 is great…
Some of the “chord” guitar could perhaps still come down a bit?
Then there might be detailed EQ work to do, but many of the other guys are better suited at commenting on that.
I’d also be keen to hear the “how” of this project…

And oh, I really like the vocals… they come in as a total surprise…
I was expecting some rough, growly type of vox - but this is a refined and somewhat feminine voice.
The contrast between this voice and the rough music is great…
I’d maximize this contrast if I could…
Is that you singing?
The tune reminds me about a band I hadn’t thought about for a long time… (so thanks for that!)

Cheers man and yes thats me doing the vocals
I can see why it may have a feminine side kind of drifts in and out of falsetto
Ive reup another version defining the muddy bass some and pulled back some of the bass off the verb as
Tesgin has suggested awesome feedback thanks guys.
Oh the project is all in the box using Reaper as my DAW , addictive drums,Guitar rig 5,Amplitude
also my first use of Ozone 8 and Nector 3 on vocals both awesome additions.

Hey man, you’ve got some serious composing chops, as well as instrument chops…
… but what I think is your “feature” is your Vox… to me that’s what sets this tune apart.

I have recorded some good vocalists, not least my mate Kerry - but he’s too busy living in a caravan in a paddock without electricity and fishing for eels… (some rare folks here in NZ…)
For this track I just dicked some Nine Volt loops together and asked him to “sing something,”
I then added some Clara Sorace vox onto it…

Meanwhile, I’ve decided that since the wise folks say, if you meet the Buddha on the Road, kill him…
I spent this evening murdering Jethro Tull’s “We Used to Know…”

OK, one more thing…
Your first notes of singing - I can handle them, because I am a progger from way back…
It doesn’t have to get as hardcore as Boston (below…)
… but I think there needs to be “permission”
Strangely, what I find is that as I work my way through the start, there could be a “ping” at 0:15 or something?
Just to bridge the energy?

What I am excited about is you’re blending full-on male stuff with that feminine energy.
Just like the 70s - and which people thought was normal.
So happy to have enjoyed that excitement.

Hey Paul - long time no hear! (Is that a Commodore ute in your profile photo, BTW?)

Listening to the latest mix:
The vocals in the chorus are pretty tucked in, but they cut through in that higher register. The verse vocals are getting a little buried - maybe use a bit of automation to get them heard.

If you like your vocals to be nice and reverby, try increasing the pre-delay on your reverb to anything from 80-150ms. You can keep the vocal nice and wet, but it will still come forward in the mix.

thanks for the feedback reup another mix with all your recent suggestions from you and Sven.
I removed the verb off the vocal just left the delays sits more in your face now I think
cheers 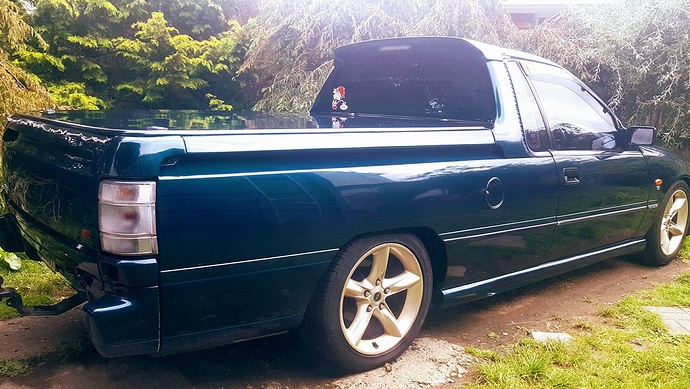 Sweet - With that power plant, you might need to keep some ballast in the tray on those icy winter NZ roads!

thanks for the feedback reup another mix with all your recent suggestions from you and Sven.
I removed the verb off the vocal just left the delays sits more in your face now I think
cheers!

I’m at work now, so I’ve just listened on little cruddy work speakers, but I can hear improvement in the clarity of the vocal. I’ll have another listen on my studio speakers when I get home tonight.

Yeah, that sounds much better now on my studio system - vocals much clearer!

Hey, interesting tune you wrote, you seem to be very inspired! Nice skills!
I like how the song is really telling a story and how you achieve that musically, it says something!

Mixing-wise, I would not copy previous comments but I share most parts.
I would only feel that you could add more balls there, like everything is very shy, under control. I wish to listen to some crazy solo or some weirdo break that really keeps the listener ready for the next part.