I got my piano professionally tuned up and voiced and a few other little issues fixed up on Tuesday, and now I’m going in and doing a full sampling session (actually, I recorded the samples on Wednesday and now I’m questioning all my life choices).

I’m making my own sampler so that I don’t have to rely on kontakt, and I really don’t feel like learning another scripting language. This is my first plugin I’ve made using JUCE. I hated it at first, but I’m getting used to it.

I tossed the samples into my plugin and this is what it sounds like so far with some MIDI files I found online. The samples are raw with no processing or noise reduction. 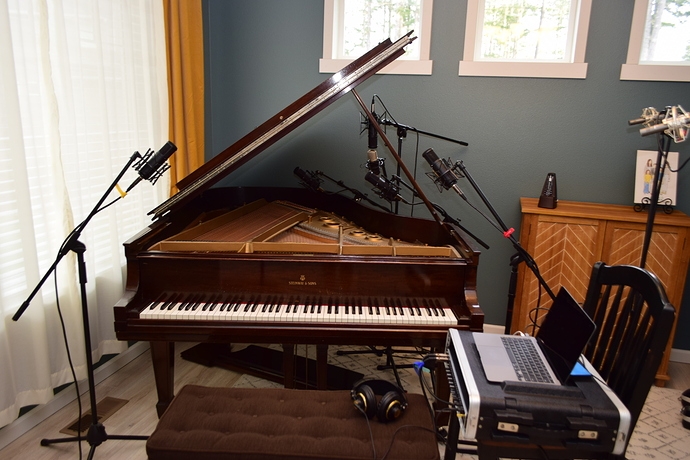 cant wait! The lows sound much better in tune now.

Yeah, it sounds way better having someone who knows what they are doing. He was so bloody fast at tuning it. He did the whole thing in as much time as it takes me to do 3 strings, and did it better than I could.

ooh nice… I have mine tuned every 18 months and it makes a huge difference… but this is a loverly tone!
O gosh, so sweet and responsive… tasty!!!

Nice playing! Sounds quite good to me. I really like the expression and dynamics of this piece.

I didn’t play that. I just downloaded a midi file and ran out through the plugin.

I’m pretty excited about it. I probably shouldn’t admit it publicly, but I only sampled one dynamic layer and I’m simulating the lower dynamics. It will make the download file waaaay smaller and I think I actually prefer the sound.

Great sound, unique, like almost chewy, works for Debussy but I’d like to hear something aggressive like Rachmaninoff or Cecil Taylor. So voicing dresses the hammer felts; did you just look for consistency or did you go for this certain sound?

So voicing dresses the hammer felts; did you just look for consistency or did you go for this certain sound?

I personally didn’t do it, I just watched the guy and asked questions. He went through and sanded down all the hammers, then went through and played them all to see if any poked out as being too loud. If they were, he’d soften the hammer a bit by poking it. There are a few notes that are noticably more dull than the others, but it’s far more even than it was before. On the highest notes, the hammer felt is getting really thin, so he couldn’t do too much to those.

Progress report. I have all the pedaling and release samples working. The only thing it doesn’t have sound-wise is the sound of the pedal clunking up and down. Then I have to go through and get all the different mic positions working, then figure out how to keep the voice count down, because it currently has no voice limiter on it, which makes it go a little out of control on the CPU if you leave the pedal down for a while.

I’m way more excited about the way this is sounding than I thought I would be. The world doesn’t really need another piano sample library, but it’s still fun to do. Once I get the system down, I’m going to go around town sampling all sorts of pianos. Home pianos, concert pianos, good pianos, crappy pianos.

Here’s a quick demo song that should make the release samples obvious, but hopefully not too obvious.

I’m particularly liking the tone of this sample… I have a vast number of piano samples to choose from but there is a sweetness and a something-I-can’t-define-but-feels-somehow-authentic to this that is really appealing.

I’m not good at this in that I can’t tell if it is good or not. sorry I do like the first 21 seconds the best. Kinda puts me i a reflective mood. Something happens to the tail at 21? Anyhow, that is quite the array of mic’s. Can’t imagine how to decide where to place them.

Something happens to the tail at 21?

Yeah, I’ve fixed up the note endings quite a bit since exporting that one.

The mics are less confusing than they look. It’s 4 pairs of stereo mics, and they all sound quite different. I’m not sure I love the Mid/Side perspective very much, so it may end up being just 3 perspectives.

I should reiterate that I’m not playing these songs. I got them from here: https://www.piano-e-competition.com/midi_2008.asp#R It’s a great resource for classical MIDI files from real performances, so they sound good.

I should reiterate that I’m not playing these songs.

Yes, I remember you mentioning that. Still, the keys sound damn good.

there is a sweetness and a something-I-can’t-define-but-feels-somehow-authentic to this that is really appealing.

Once I get the system down, I’m going to go around town sampling all sorts of pianos. Home pianos, concert pianos, good pianos, crappy pianos

Much more refined and usable sound now and yes it is appealing. I had always thought of pianos as being less individual and unique than guitars for instance but that’s obviously not true, just the variabilites of wooden construction alone would make a difference between any two of the same brand. And now I’ve read about the voicing process and it seems that any piano sound can be varied a lot.

So the idea of having multiple sample sources makes sense, it would be great for composers to be able to match sounds to compositions; a crappy piano to go with my crappy songs

So the idea of having multiple sample sources makes sense, it would be great for composers to be able to match sounds to compositions; a crappy piano to go with my crappy songs

Different pianos have different sounds, but the same piano will have a wildly different sound depending on how well it’s tuned. The hardness of the hammers makes a difference as well. Mic position makes a huge difference, plus the room, etc. There’s lots of variables when it comes to recording a piano, which is good because it means there’s room for more piano libraries. Most sample libraries seem to focus on the big concert grands, which makes sense because they sound great, but there seems to be a bit of a hole in the smaller piano side of things.

It’s hard because a good piano sounds good, but it doesn’t always sound right. That’s where I have a hard time figuring out which direction to take this. The original idea was to make it sound like a piano recorded in a small room. It’s not supposed to sound like a 10 foot grand in a concert hall, but I end up comparing it to piano libraries that are that, which makes me start comparing the wrong things.

I suppose you’d want to use the Kontakt player, kind of a built in market there. I’m not familiar with that, does it give you some mod functions, some way to get some unique sounds and set yourself apart from the crowd? You’re right I think, there’s a lot of arrangements a big grand doesn’t fit but I guess that sound is easier to sell. People tend to buy samples that are impressive right from the start which doesn’t always make them the most useful.

I suppose you’d want to use the Kontakt player

I considered it. I made an early prototype with kontakt, but there are some major issues with it.

I am more free to make a complete plugin if I just make it myself.

That seems like a great way to go. From my limited experience with sample libraries the better ones have their own players. You could get real creative, maybe distortion, modulation, let the acoustic venture into a new flavor of Rhodes?

bundled with some DAW.

Your own, or cut a deal with somebody?