Doh! Talk about getting nickel-and-dime'd!

Hey @bozmillar… just out of curiosity… would you have honored this? If someone had ocntacted you about the same matter?

I have no idea how retail websites work. Is it difficult to generate a voucher code? @holster, does your rusty frets site allow you to do generate a $20 coupon and apply it at the cart? 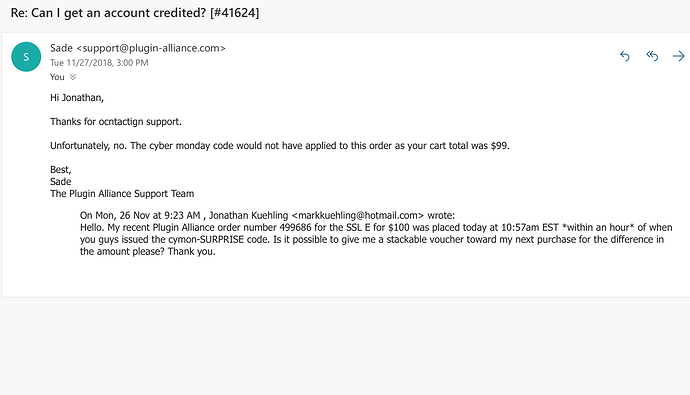 I usually don’t decline requests like this, but they don’t come very often, so they’re easy to handle. I always let my sales go one day longer than I advertise, and if someone asks for another product to be on sale and I know it’s not going to be for a long time, I’ll usually just give them a coupon. It just seems easier to me. The point of a sale is not to narrow people’s choices. It’s to give an excuse to email everyone and remind them that there’s stuff to be bought.

If it actually worked, I’d just price everything at sale price all the time and not bother with promotions and all that nonsense. But people don’t think to buy stuff unless there’s a big promotion going on, so you sales are really just an excuse to remind people you exist. Once I have someone’s attention, I see no reason to not give them a discount on something if they ask for it, since that’s the whole point of the sale in the first place.

@Jonathan from reading your email and their reply, it doesn’t sound like they are saying, “too bad, you missed it by an hour and we won’t budge on that.” It sounds like they are saying that the Cyber Monday deal would not have applied to your purchase, even if you had ordered it a couple of hours later. When you look at it that way, it seems pretty reasonable to me.

@holster, does your rusty frets site allow you to do generate a $20 coupon and apply it at the cart?

The site easily allows me to generate a coupon code for any percentage or a set dollar amount, but it doesn’t allow a customer to generate their own.