Do you need perfect hearing to be a great mixer?

Recording, Mixing and Producing
Do you need perfect hearing to be a great mixer?
0
ColdRoomStudio September 14, 2021, 11:25pm #1

This is a very lengthy video, but very worthwhile IMO. (It is also available as an audio podcast)

If you have a boring job to do, or you have to travel, it’s worth just putting it on and just taking it in - even in smaller chunks of time if need be.

My dad worked in audiology for many years, and he told me a little about how important the ear/brain relationship is to the act of “hearing”, and also about how much compensation happens in our brain to decipher the physical stimuli. Nevertheless, it was very satisfying to hear confirmation of what he had told me here. It also confirmed a LOT of what I have observed over the years of being involved in music and audio.

If you have ever wondered or been effected by about hearing loss, tinnitus or any other hearing disorder, or even just wondered if you need perfect hearing to be a great mixer, then this is very highly recommended! 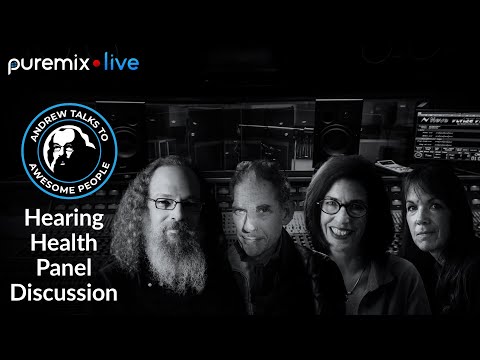 how important the ear/brain relationship is to the act of “hearing”, and also about how much compensation happens in our brain to decipher the physical stimuli.

I just jumped around and listened a little bit so far, but around 2:32:00, I noticed a chat comment that seemed to sum up what they were talking about which resonated with me.

[Bops NY] “SO what one hears, is not the same as another, almost like degrees of colour blindness.”

I listened more closely to the video and around that time-stamp they seemed to be implying that, though maybe didn’t explicitly say it. Later, talking about tinnitus and how to work around it, they suggested you could compensate through training certain frequencies.

This is something that has occurred to me for a long time on the forums, how we all hear and perceive differently, even though we share a genetic model of the same physical hardware. So to assume that two people will hear something the same doesn’t make sense, kind of like unique fingerprints can never match another. It then almost becomes like trying to describe colors or what you see in a picture to someone else. Or what that mystery substance is with your hands feeling it in a concealed box. They may or may not understand the description or interpretation.

It’s no wonder there are so many disagreements around music and sound, because we each live inside our own ‘world’ to some degree.

Yeah, it’s a BIG subject, and there is a lot to unpack on this. My takeaway is that our hearing system, in combination with our brain is AMAZING.

Might not be pertinent, and might be a frequency thing, but my wife always says “you never listen to me” OR “repeat back to me what I justsaid” I tell her she speaks in the 200-400 range and that is where I am deficient. Now she screams. After 52 years, I have mastered selective hearing.

but my wife always says “you never listen to me”

I have tinnitus, but my wife keeps telling me it’s BS and I just don’t want to listen to her.

I tell her she speaks in the 200-400 range and that is where I am deficient. Now she screams.

You can’t win. I can fully sympathize with you Paul!

What amazes me is that loss of hearing is (and must obviously be) common among audio professionals, and yet they manage to churn out good mixes.