another 5 minute song that was unplanned and fun but is my bad habit never gets done well so it ends in the pile of demo’s…and thats ok.

anyone else burn out on re-writes? cleaning it all up then its work and the disciplinary brain wakes up and I realize I should be mowing the yard instead of playing…and having fun?

it be fun to hear it done by professionals… shrooms 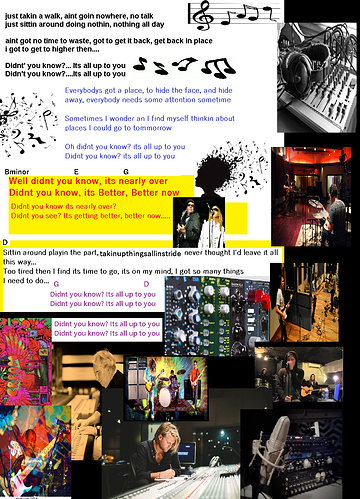 I like it, that chorus is gonna be stuck in my head now. It could use some drums, it doesn’t really need them what with the percussiveness of the acoustic, but it might be kinda cool if drums and bass guitar came in later in the song on some of the choruses or something and really filled everything out. It sounds great as is though.

wow, I love this. Like the bass up a bit.Sounds live. Reminds me a little of some of the off Beatles stuff. There is a driving beat in hear as well. Like your voice. “didn’t you know” ha that decending riff really makes it.

Hire some one to mow for you and keep making these great tracks. ha ha

Nice! Sounds like the offspring of a tryst between Lou Reed, The Beatles & Stone Temple Pilots. Love it - The recording is pretty ropey and demo-like, but it has a rough-hewn, shambolic charm, much like your accompanying collage. :beerbang: As a song, it’s top-notch… Should you polish it? It’s all up to you, of course!

Wow, I love the rough hewn sound of the recording. Yes, maybe some bass and drums or cajon, maybe. The song drives itself nicely and is well crafted. I would love to get my hands on this just to play with the mix a wee bit. But, what you have here is a very good song and love the hook! Keep up the good work. I can’t wait to hear more of your music. Well done.

Ok, it’s me again. I can’t believe there hasn’t been more attention to what you have done here. I have heard thousand of original songs so far in my music journey, and this. to me, is a top ten. I really can get into it.

well thanks …that was one of those that pop up while testing preamps or something.
the freestyle (sloppy approach) is fun but then its not easily repeatable because its kind of like throwing balloon paint balls at a canvas or something. I think some of us HR folk can overlook the poor recordings easier than others (or the fact theres not even drums on it…lol)

I think the sub par recording lends itself to the tune. It would be great with drums, but the acoustic makes it sound like there is a percussive element. Killer.