Could someone help me understand dynamic EQ?

I’ve been trying to understand dynamic EQ and just don’t “quite” get it. I understand multiband compression. That’s intuitive and makes a lot of sense to me. You’re applying compression over userdefined frequency ranges. Cool.

When I read about dynamic EQ I hear it consistently described as applying EQ dependent on a trigger – a threshhold. That “would” make sense to me, but as I watch tutorials on, say, TDR Nova or Waves F6 or Fabfilter MB, it’s clear it’s more than that.

It makes sense to me to think of it as applying compression around a defined frequency point, with a defined Q. That part is “similar” to multiband compression. However, I don’t understand how it interacts with the EQ: so if I define a point at, I dunno, say 500 Hz, and turn the compressor for that point, and define the Q /threshold/etc., what exactly happens if I then raise that point by, say, 10 dB? So I’m applying a boost to that EQ point, but compressing the signal.

So, does it mean that the EQ boost is not applied until the threshhold is crossed, but that in addition compression is applied?

For some reason I just can’t think in terms of what the EQ and compression are doing simultaneously. Just not clicking for me at all! Sorry for being so daft.

I’ll give it try…
I think you’re making it too complicated. Think of dynamic EQ as an EQ for attenuation purposes to start off with. Say you have a vocal with an annoying nasal tone at some specific frequency. You could just use a normal eq and cut that specific frequency to a level that is acceptable. But then you notice the nasal sound is there only when the singer hits certain notes. By cutting that frequency you would also cut it when it’s not needed, and this would influence the sound of the vocal. With a dynamic e.q you can set the threshold, Q (etc.) in such a way that the EQ only cuts out that frequency when the threshold is crossed at that frequency , i.e. when the annoying nasal tone occurs.

Another example is when you want to use dynamic e.q. as a frequency specific ducker: for instance bass and kick are competing for the 80 - 100 hz range and you want to hear the kick first at that specific frequency. You could set up the dynamic e.q. on your bass to attenuate 3 dB (or whatever you need) only at that frequency triggered by the kick using a short attack and release time. Obviously you would need to set it up in parallel. If you had used a normal compressor the whole bass signal would be attenuated, using a dynamic e.q. only a specific frequency. You could do the same with a multiband comp, but that’s less precise than a dynamic e.q. The differences between a multiband comp and dynamic eq aren’t all that big. I tend to think of a multiband when you need to use a compressor on a relatively large frequency range, and a dynamic e.q. when you want to attenuate very specific frequencies (in a dynamic way). Similar principles used for different purposes. Having said that, I found you can use TDR Nova in a similar way as a multiband, by setting Q to be broad. On the you tube tutorials there are examples of such use for TDR Nova.

In your example you want to boost the e.q. and attenuate that same frequency at the same time with the dynamic e.q. Maybe you want to use a high shelf to make a vocal sound more airy and crisp, but this will also boost unwanted s sounds so you could use the dynamic e.q as a de-esser within that frequency range. That’s possible within TDR Nova (my favourite), but it would be the same as using a normal eq and a dynamic one separate from each other. I am guessing that this option has got you confused. Am I right?

Anyway: I would advise you to just try it out on some annoying frequency on some track (I’m sure you have them ;). Best way of learning how it works!

Just think of it as an EQ the only turns on when a certain volume is reached. When the signal is under that volume nothing happens. When it exceeds that volume the EQ turns on. Of course, there are things like attack, release, etc, but the that is the basic idea.

Well, no offense but I don’t see how this answers to the OP as it doesn’t really allow to tell a dynamic EQ and a multi-band compressor apart.

This is a very legitimate question I’ve asked myself recently too so I’ll give it a try as well.

Short answer: by design (split input signal for MB comps vs sidechain signal for dynamic EQs), a dynamic EQ is more transparent than a multi-band compressor (although this is becoming gradually less true in the digital world) and allows surgical corrections, which makes it a more suitable tool for mastering.

Just think of it as an EQ the only turns on when a certain volume is reached. When the signal is under that volume nothing happens. When it exceeds that volume the EQ turns on.

So, that’s exactly what’s confusing to me. That’s the description I see consistently of what dynamic EQ is all about. However, when I use Nova (and I believe F6 is the same way) that doesn’t appear to be what’s happening. Instead, it’s clear that it’s more than just activating the EQ when a threshold is reached: it also activates a compressor.

So is it an EQ that just has a compressor on top of it? Meaning the EQ is always modifying the signal and the compressor functions separately from the EQ, which is always active? So, EQ always active and compressor active when turned on and threshold is reached?

When I read explanations, read user manuals, watch tutorials, that’s not the way they explain it, but I think that’s what’s happening. That seems to be what the link in @Lophophora’s post is describing. This diagram … 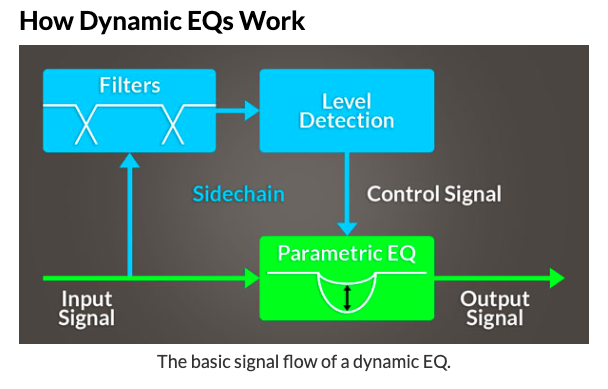 Is that correct? If so, that makes sense to me. That seems like what Nova is doing, but nobody describes it that way. Typically I see it described, @Chandler, as you described it.

The EQ can be active or inactive. You can use a dynamicEQ just as you would use a normal EQ if you like or only have it operate dynamically. For example if you have it on a vocal and want it to reduce 4khz everytime an “S” sound is heard. When the signals level doesn’t exceed the threshold the sound will be the same as if the plug in is bypassed. Each EQ bands gain is determined by the level detector when it is used in dynamic mode. Of course it doesn’t need to always be working dynamically and you can of course pull the EQ gain up or down manually and then add the dynamic functionality if you want.

Multiband compressors are constantly splitting the frequency spectrum, so even if there is no gain change things might sound different because of the phase shift. Normally I don’t notice this, but there can be a change in sound.

I’d say normally a dynamicEQ will sound cleaner, but a Multiband compressor might handle bigger gain changes better because they usually don’t have a limited gain reduction range like dynamicEQs usually do. However I think most of the time either will work and it doesn’t matter.

When the signals level doesn’t exceed the threshold the sound will be the same as if the plug in is bypassed.

So, by that do you mean that if the dynamic mode is turned on for a given point, then raising or lowering the point as an EQ point does nothing if the threshold is not passed? I get that the compression piece does not kick in if the threshold isn’t passed, but my understanding is that raising that EQ point (or lowering it) will still modify the volume of that frequency, regardless of whether the threshold is crossed.

I was on the phone with Waves’ support this week (sidebar: I was asking him about whether REQ could be resized, cuz it’s SO tiny in my DAW; I’d asked that question in another post somewhere on IRD a week or two ago; no one commented, so I took it no one knew for sure. He clarified that none of their plugins can be resized. Said it’s something they’re working on though!), and asked the support guy to clarify this. He said that in the F6 the way to think of it is that the compression is on top of the EQ. EQ first, then compression does its thing if the threshold is crossed. EQ always active, regardless of threshold.

I really just need to sit down and play with it more deliberately to see how it handles those things. But anyway, that’s the way he explained it. Is that different than what you’re saying, @Chandler?

Multiband compressors are constantly splitting the frequency spectrum, so even if there is no gain change things might sound different because of the phase shift.

Does that mean that there’d be some kind of phase anomaly at the crossover points?

Yeah, I hear consistently that dynamic EQ is cleaner and that in addition to that phase stuff, MB compressors are more likely to color the sound. Not sure though that that’s true of all MBCs. Does the F6 color sound? Nova?

I am guessing that this option has got you confused. Am I right?

I think you’re confusing the dynamic parts of it and the static parts. They work together, but they can also work separately. A dynamic EQ can work the same way as a normal eq. Just don’t touch the dynamic section and you will have a normal eq. There is no difference. You can also just use the dynamic section and leave the gain of the bands alone. In that case you can effect things dynamically, but when things are below the threshold there is no eq happening. You can also combine them and use it both statically and dynamically at the same time. This is the most common way people use them.

When dynamic eqs aren’t changing the gain they is of course no phase shift. A multiband compressor always changes the phase(unless it is linear phase).