Computer noise coming out of my speakers?

No internet on that computer Takka…

My speakers are active and ONE of them is in the same power strip as the computer. So that would explain one speaker but not the other.
I will try it anyway though!

That big old antenna (RCA) you are referring to, was part of the original purchase of the RME9632. I didn’t buy it seperately. So, I guess that should have also been taken care of RME…

The issue DID present itself after I switched from SPDIF to RCA.
As long as I was going In & Out from the Card to the mixer via optical and from the mixer to the speakers via balanced cables, I had no problem!
Anyway, a lot of good suggestions to try out here!
Sorry, for not answering earlier but blame it on the hour difference (Greece).
I’ll get back to you all with the results!
Thx for the feedback!

But am I right in saying that a balanced cable can only fix the issue of interference from the cables themselves?

Yes. That is correct. Balanced cables help to eliminate any interference picked up by the cables.

I’ve had this problem before, as others have said it’s a grounding issue.

It turns out computer motherboards can be an absolute rat’s nest of ground issues - all the processors/chipsets/controllers/magical gubbins on the board dump digital switching noise to ground at frequencies in the mega and gigahertz as they switch between different power states depending on what task is asked of them.

In principle all that noise should travel along the ground path through the computer’s PSU, down the kettle lead and safely to earth.

However, if there are other, easier paths available,the noise will go along them instead. In my case, it found it easier to go through my PCI firewire expansion card and along the firewire cable to my RME800 (RME is not having a good showing in this thread) where it then travelled to my speakers via my desk and gave me digital clickng, whining, and general future noises whenever I moved a mouse or the screen re-drew itself.

The problem was that my computer’s case was powder coated a sexy black, including inside the screw holes for the motherboard standoffs. So the only ground path to the PSU was through the power cable (I did some probing with a MM).

The fix wasn’t too difficult - I used a pen knife to scrape off the powder coating in the MB standoff holes and along the edge of the case where the PCI firewire card’s faceplate touched the case. That took the ground noise from about -80dBfs as per RME’s totalmix input meters (the ground noise was getting to the input jacks even with nothing plugged in!) to -106dB, which is low enough that it’s a non issue.

Of course, the exact source and cause of the noise will vary by computer because different motherboards have different layouts, but if the noise is coming through your 9632 it’s probably safe to say that if the switching noise had a better path to ground than through the cables you’ve plugged into it, it’d take that path instead.

Yup… that’s a house wiring thing in your case.The OP said that it was fine with the optical out and I’m assuming he had the speakers plugged into the same outlet… maybe even the mixer.

the mixer will have balnaced out the signal and got rid of the noise, now he`s taken the mixer out of the chain he no longer has it to remove the signal noise thats why its only showing up now, chances are it would be even worse through the optical, who knows.
but yeah its just a case of finding out whats causing the noise and if you cant do everything you can to reduce the noise floor

So, I tried out some suggestions without much luck.

So, I guess the only thing that could help is a ground isolator or something like Cirrus proposed.

Computer noise coming through is almost always a ground loop problem. The stray voltage caused by multiple paths to ground changes the ground reference voltage and switching noise from the PC is now being amplified in your monitors. 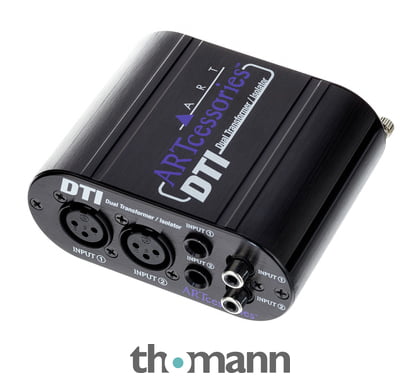 That is the exact unit I use between my interface and powered monitors. Nothing but silence coming from the speakers when no signal is present.

It has good specs and no noticeable low end roll off.

I’ve solved this by using a mains supply USB hub instead of the PC USB supply.

wait a minute. based on the checklist, it sounds to me like it’s most definitely an EMI issue. Is grounding going to solve that. The only thing that will fix that is a cable with better shielding, or a D/A converter that is away from the computer so that your RCA cable runs aren’t so long and aren’t so close to the computer.

So, I guess the only thing that could help is a ground isolator or something like Cirrus proposed.

Based on what you’ve said, here and the first post, it seems to point to the cables. Balanced cables may be the solution. Or at least very good rca cables. But I don’t have much confidence in rca cables or jacks.

The only thing that seem to have some impact was moving around the RCA like Boz suggested. There were positions where the interference got worse and others that got much better. It didn’t eliminate it of course.

and you were fine with the opto out…

Well, the most sure and cheapest solution is going back to optical which is probably what I’ll do after I am finished with Personality.
But I’d like to solve that thing first even if just for the sake of it!

Balanced cables may be the solution

RJ, as you read in my card’s specs, it doesn’t have balanced outputs. (unless you buy and extension). Only those RCA outs. So, unless I go back to my previous optical set up I will have to spend some money either on an isolator or the RME extension with balanced in & outs.

Well, the most sure and cheapest solution is going back to optical which is probably what I’ll do after I am finished with Personality.

I’m still not clear on why you needed to “had” to change your setup for the Personality mix. Please explain?
But I’m pretty convinced that getting rid of the RCA cables will “solve” your issue.
have fun
rich

The mixer I use is an old digital mixer from Roland VM-3100pro.
Unfortunally it doesn’t output sound on 48KHz but only 44.1KHz.

Most Personality files where 48KHz.
So I had to take the mixer out of the equation in order to hear it!

What DAW are you using? You should be able to convert to 44.1 right inside the daw.
Are you saying 48Khz = No sound at all. Or just glitch?

Of course yeah sorry - missed that…