In order to come up with THE name for your new plugin, I feel it might be good to gain a better understanding of what your plugin does. So, if you don’t mind, I was wondering if you could answer a couple of questions about Clippy? (Probably stupid ones at that.) 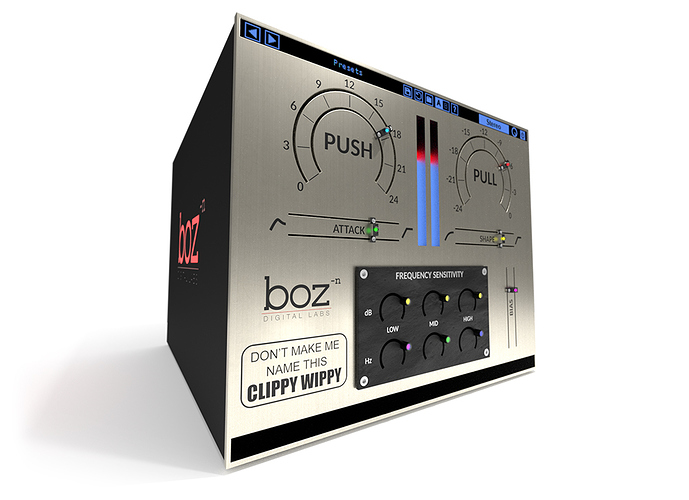 Your description states:
“Clippy Wippy is sort of a hybrid clipper/limiter. It lets you dial in the clipping and limiting flavors in just the right way to match your content.”

First off - cool idea! Now to the questions…

Where is this at? Went to his site and could not find anything aboot this.

He also sent out an email yesterday.

Crap! You have to login to reply…boo!

Logging in to your Boz account has been required for every other thing he’s ever run on there… just sayin’.

I meant to put together a video showing it in action, but I just moved into my house this week, so it didn’t happen.

Is Push the limiter/compressor and Pull the clipper?

It’s actually “input gain” and “ceiling.” Push and Pull just fit better because they were both 4 letters.

The Attack slider under “Push”? Is this the attack speed for the limiter part of the plugin? Does it affect the “Push” immediately above it?

Those sliders will actually all be changing. I made some changes since I did the last graphics render, so the names will be changed, and a few features added. Bias is going away. It never did anything exciting for me. It will be replaced with “attack” and “release” for the limiter’s attack and release settings.

The “attack” slider under the push knob will be changed to “blend” or something along those lines. There will be 4 different blend modes (crossover 1, crossover 2, blend, and series).

The Shape slider? Is this for Hard vs Soft clipping? And does this affect the “Pull” immediately above it?

Gorgeous and clean interface - love it! (Not a question.)

Thanks. experimenting on the graphics is kind of half the fun. I’m starting to get bored with the graphics that look like real hardware, but the 3d stuff is fun, so I’m trying to come up with a half way point

Yes it has. Although I haven’t revealed it yet. Don’t get too excited.

Don’t get too excited.

Is THIS “Clippy Wippy”?? Or the little brother? Inquiring minds want to know! Great UI. 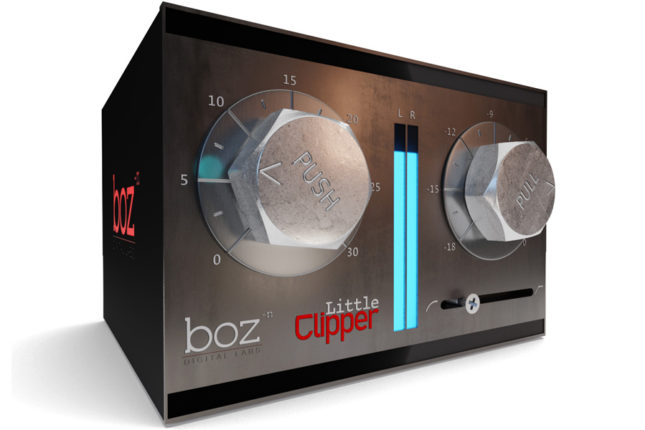 PS. Your updated website is nice and clean and slick too. Nice job on that as well.

Is THIS “Clippy Wippy”?? Or the little brother?

It’s the little brother. I’m just finishing up the final touches on the full version before releasing it.

Dammit! How can I win you over? Well at least I gave you some inspiration of what NOT to name the damn thing…ha!

PS. Your updated website is nice and clean and slick too. Nice job on that as well.

Went to the site, did not notice a “news” feed?

You still have hope @cptfiasco! IF you actually bothered to log in and enter your names, that is.

Why is everyone putting up defenses? When I greet new (potential) friends, I do not make them write their name and some random 8 character “catch phrase”. The internet has taken over us socially.

Damn it I need to try some of his plugins out.