I picked up a pair of these because I wanted a pair of LDC multi-pattern mics. I haven’t given it any sort of thorough run though other than to make sure that it works and doesn’t sound obviously terrible. It passed that test.

I’ve seen some ok and some very bad products come from Monoprice’s SR line, but this one at least seems to be all wired up, unlike some other things I’ve seen from them.

I’m curious to know if anybody makes a multi-pattern LDC for any less than this.

I’m curious to know if anybody makes a multi-pattern LDC for any less than this.

I doubt it. That looks like a pretty phenomenal deal! Given the components to make a decent mic, and multi-pattern also (double-sided capsule), plus all the accessories that come with it, that looks unbeatable for the price. I would check the multi-pattern functionality closely, if you didn’t go that far with it, to make sure that aspect functions as you might expect. The capsule is key of course, and likely the most expensive to produce. Pretty amazing it comes with a shock mount at that price. If the build quality of that shock mount is decent, and it does the job of not transmitting external vibrations to the mic, that may be the second key to the whole thing.

If the build quality of that shock mount is decent

I got two, and one of the shock mounts is screwy. It’s almost impossible to rotate the mic once it’s in. I meant to complain to them, but I’m guessing it’s too late now. I’m not a big fan of the “screw in the microphone” type shock mount. I much prefer the cheap ones that just grip the mic.

I’m not a big fan of the “screw in the microphone” type shock mount. I much prefer the cheap ones that just grip the mic.

I guess the ‘corded suspension’ type shock mounts are supposed to be superior, presumably, since they are used on most high end mics. But their design requires good construction. That probably applies to the threaded screw-in mounting aspect too. I have one that’s corded suspension but instead uses a big rubber band, basically, to hold the mic. Which is fine, but somehow seems less stable.

They’re more stable, but I hate using them because they’re a pain to set up. I’ve never had a mic slip out of a cheap shock mount, although I’m sure there are plenty of situations where you wouldn’t want one. For home use, I have no need for that.

How did the mics work?

I noticed the pretty highly regarded MXL V67 HE are at $129 with some nice stuff…like the case, shock, metal pop filter like the old Neumanns of 60’s…transformer, dual sided capsule…
my problems with LDC is they pick up the dogs barking outside and the neighbors computer fans. (sarcasm) but true.

How did the mics work?

Honestly, I have a hard time telling if a mic sounds good without comparing it to another mic, and it changes from source to source. From what I can tell, it’s your typical k-67 capsule without corrective circuitry, so there’s more high end than there should be, but this seems to be typical of pretty much all cheap mics.

I don’t have a love of microphones like some people do, although it’s great to have a microphone that you don’t have to wonder about. Even expensive mics vary pretty widely in sound.

Here’s a ‘millennial’ review of a perhaps similar product (she has a mfr deal on the video which I’m not promoting BTW). A few studio and singing tips too (not a pro coach, but interesting presentation).
. 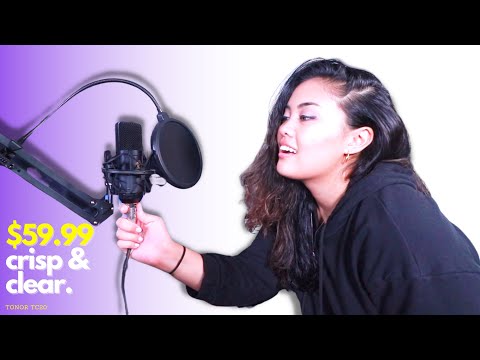 definitely not the same idea with this mic. That mic is an electret in a LDC housing. Nobody should pay more than $15 for one of those. Really what you are paying for in this is the boom mount, pop filter and shock mount. You shouldn’t ever pay more than $10 for that mic on its own.

That mic is an electret in a LDC housing.

How did you determine that? I did think it was probably ‘too good to be true’, but their web page seems to give the impression of a condenser mic and doesn’t say anything about electret that I can find. If so, they could be false/misleading with their advertising. They say it requires phantom power, which might lead you to believe it’s the real thing, but I saw something that says electrets “usually have a FET buffer inside which needs bias voltage.” So maybe that could explain it?

Clues that it’s an electret:

These electret mics are all over amazon. If it’s cheap and it doesn’t specifically say the diaphragm size, you can be 90% sure it’s a side address electret mic. In fact, most of the mics come with an XLR->trs headphone cable.

I’m not saying that electret capsules are bad. I won’t even say you can’t make a good recording with a “crappy” mic. In fact, being able to plug a microphone directly into your phone is a nice feature. I just think it’s a little disingenuous to package it in a LDC housing because they know full well their user base doesn’t know the difference.

It literally shows a picture of the capsule.

I just think it’s a little disingenuous to package it in a LDC housing because they know full well their user base doesn’t know the difference.

Ah, I see the graphic now, with the ‘capsule’ behind the mesh screen. Yeah, you’d have to know what you’re looking for to know the difference. And I agree, it’s a misleading sales tactic.

I guess it’s kind of hard to call it misleading when the people that are being misled don’t even know what a LDC is. it’s not like they think they are getting one thing, when they don’t even know the thing they aren’t getting is a thing. They just see the housing and think it looks like the expensive mics.

I guess it’s kind of hard to call it misleading when the people that are being misled don’t even know what a LDC is.

In litigation for a false advertising case, I think they’d look at ‘intent’, so that’s how I’m looking at it. To your point, if the consumer is happy with their purchase and it works as advertised, perhaps “ignorance is bliss”. If the mic works decently, and you get lots of accessories (that work decently), it’s not a blatant rip-off or particularly fraudulent. Just a bit intentionally deceptive IMO.

I can’t tell if I agree with this or not. What’s deceptive? It doesn’t say anything about it being an LDC. Everything in the description is accurate. And who is being deceived? Anybody who buys this is getting exactly what they think they are buying.

There’s a middle ground of half informed people who think that a side address microphone automatically means LDC. Half of the well known brands don’t even put large diaphragms in their microphones. MXL sure doesn’t on most of theirs. You can remove the capsule and screw it onto your pencil mic. Here’s a pencil mic with a MXL 990 capsule. 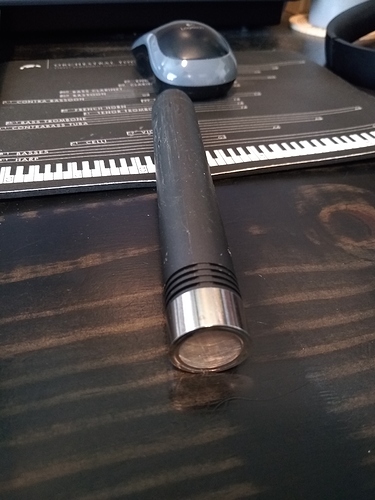 What’s deceptive? It doesn’t say anything about it being an LDC. Everything in the description is accurate. And who is being deceived? Anybody who buys this is getting exactly what they think they are buying.

Yes, they apparently have crafted the advertising to not be technically deceptive. Is it an accident or coincidence that they put an electret ‘capsule’ in what looks like an LDC? That’s a marketing choice, so there’s clearly some intention there. As I said before, in this case we’d really have to know their intention to see if they meant to mislead (some) people. I would guess this was carefully crafted to not get them in legal trouble. If someone designed a car that looked like a Cadillac, but they put a Honda engine and transmission in it, they could probably sell it to lots of people if they didn’t mislead people about the performance. But a Cadillac aficionado would know the difference and likely be critical of it.

At this point, it really falls to the consumer to question what they’re purchasing. Caveat Emptor.

Half of the well known brands don’t even put large diaphragms in their microphones. MXL sure doesn’t on most of theirs. You can remove the capsule and screw it onto your pencil mic. Here’s a pencil mic with a MXL 990 capsule.

Yeah, some people have been critical of that too (MXL), though at least it’s an actual condenser capsule and not something else. AFAIK all of this stuff is related to Chinese made products, and the sellers are perhaps less worried about reputational backlash, relying instead on price point. Interesting adaptation you have there, with the pencil mic.

Interesting related article in Sound On Sound from a few years ago:
https://www.soundonsound.com/sound-advice/q-are-back-electret-mics-any-good

Is it an accident or coincidence that they put an electret ‘capsule’ in what looks like an LDC?

It doesn’t look like and LDC. It looks like a side address mic. That’s like saying it’s deceptive to sell a red car because unsuspecting customers might not know there isn’t actually a V8 engine.

I don’t think there are many people that would buy this mic thinking that they are getting a LDC. They either know what an LDC is, and would instantly know that this isn’t one, or they don’t know that LDCs exist, and therefore wouldn’t be deceived.

related article in Sound On Sound

Interesting, I didn’t know that!

It has the general appearance of a U87 style LDC to me. I was very suspicious of it because of the price, but didn’t look far enough to see the hidden design until you pointed it out. And they don’t tell what type of hardware it actually is anywhere in their advertisements. Deception has at least 2 faces: 1) purposely misleading you to the wrong conclusion, and 2) purposely leaving out crucial details so that you make erroneous - but predictable - assumptions. I believe that they are at least guilty of #2.

Even that graphic kinda/sorta looks like an LDC capsule, except it’s clear it’s an “artistic representation” and not an actual photo. So it’s actually hard to tell what it is or might be. And really, I’m taking your word for it that it’s actually an electret condenser mic/capsule … I have no evidence from them what it actually is! Their lack of transparency is another indication of deception #2.

That is a deal though for Multi-Pattern, after watching the Neumann class on micing Acoustic /Vocal the dual Fig 8 was the top-dog method…with dual live in 2nd and the single cardiod 3rd option.

Ive only had one tube mic and the bulky powersupply and fat wierd cable…all seemed like something waiting to break or cause problems. The sound was great but with some plugins my SM58 can sound like a LDC.

the multipattern is intriguing …I’d like to try the Neumann Fig 8 thing with 2qty mics. $198 for 2 is pretty good.