Can someone take a look at this Reaper issue?

Hey guys. A friend of mine was having some problems with Reaper. I was wondering if someone might be able to take a quick look at this video and advise on how to help him trouble shoot this (or point to a video or page that could advise). Thanks!

Has he searched for the files? There’s a “search” button there. If he knows where the file is, he can also browse to it manually. This can be tedious though if it’s a lot of files and in every project. But if the files are still on his computer he can definitely resolve this.

So the problem is that REAPER doesn’t know where the file is located. Cristina is right. He should locate the file and then after he knows where it is use the “Browse for file” button to point REAPER to that folder.

That’s only an immediate fix to get that file back in this project. His problem is bigger than that – easily fixed – but it has to do with his preferences. If you look at that pop-up window, the problem is that the media he’s trying to find was last saved in a folder on his desktop named Untitled Project, but the project itself is saved in his Documents folder, in a different folder named REAPER Media. So the first part of the problem is that the media was saved in a different location than the project, and the second is that “somewhere, somehow” that media was moved or deleted. That wasn’t REAPER’s fault! The file simply is not where REAPER put it in the last save. Assuming it’s still on his hard drive somewhere it’s easily fixed. Locate it and tell REAPER where it is. Better, after locating the media, moved it into a folder within the project named Audio, then tell REAPER where it is, as described above, and save the project. REAPER will remember this next time you open the project.

The longer term fix is a tweak to his preferences:

First, go to preferences (Cmd-, on MacOS), then to general>paths (on the left) and designate the folder where you want REAPER to save new projects.

Then when you create a new project REAPER will automatically go to that folder when you save the project.

Second thing is he’ll want to go to the Project Settings page (alt + Enter), go to the media tab, and in the first box (path to save media files) enter Audio. 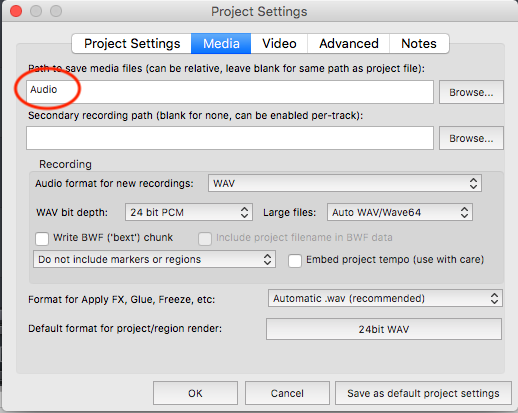 That tells REAPER to always save your project audio files in a folder within the project, named Audio. Probably be good at this point to save it as a template so that every time REAPER creates a new project it’ll save the media in an Audio folder.

Last, when you save a project, at the bottom of the page make sure the box is checked that says, “Create subdirectory for project.”

Bingo! Now when you go to save a project, REAPER will automatically go to media folder you designated in step one above (so, he’d probably want to define that folder as REAPER Media, which is in his documents folder). As long as that “create subdirectory for project” is selected, when you save a project it’ll create a folder inside that REAPER Media folder, with the project name. And as long as he did step two above, all the audio will be in its own audio folder, which is in his project folder, which is in the REAPER Media folder. And again, as long as you save it as a template, REAPER will do this every time.

More than he asked for; but HIS issue is that his media files are no longer in the same location as they were last time he saved the project.

I love REAPER. Workflow took a while to learn, but it’s extremely logical, configurable and consistent.

Thanks guys! I’ll forward the tread to him