Can I run a Tascam interface through a DI? Sorry - I don't really understand impedance

I need to replace a Behringer Uphoria on my live rack because the Uphoria doesn’t have enough outputs. Someone gave me this yesterday.

My question is if it will cause any problems coming out of a balanced line out on the Tascam, with an unbalanced cable, to a DI? (For the purpose of converting the adapters from quarter inch to XLR). So far it has been helpful to use the DI because of the ground lift, and the fact I can keep everything pre-wired, then stuff the snake into the back of the rack unit at the end of the show.

Here’s a picture if it helps. The scarlet sitting right below the 8 channel DI was replaced with a Uphoria interface. Now I’m looking to replace the Uphoria with the Tascam. 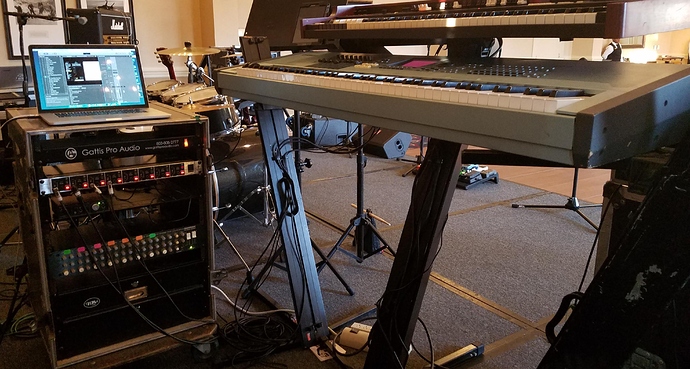 Now people, with more knowledge than me can correct me, but in this situation I’d get a hold of a reamp box (Radial makes a couple that aren’t especially expensive) and run the line-out of the Tascam into that.

Oops!! So sorry…I failed to clarify that this is a keyboard rig! lol. My bad.

Sending a balanced signal to the DI should be fine. It will just treat it as if it were an unbalanced connection. And the impedance shouldn’t be a problem either.

That said, you should of course check it to make sure there are no noise issues when you do it. But you aren’t going to ruin anything by hooking it up that way.

Sending a balanced signal to the DI should be fine. And the impedance shouldn’t be a problem either.

Ignore my calls to spend money!

Agree with Boz, the TRS to TRS cable will effectively ‘unbalance’ the signal on the way in and the DI will then lower the signal (from line level to mic level) but also balance it back up and send it back out on XLR’s.

Sorry. I’m a dummy. Which one is which? How do I know the difference?

Really the best way to tell is to look at the specs, but there are general standards.

Most active gear will have a low output impedance.

I can’t really think of many situations where something will have a high output impedance besides guitar and maybe a few old instruments. Any modern keyboard with a line out will probably be low output impedance.

Most active gear will have a low output impedance.

What do you mean by active gear?

And is there a relationship between the format of the cable and the impedance? Like are all XLRs high impedance? All quarter inch unbalanced TS cables low impedance?

So you have an output source, a cable, and an input. Can any of these 3 be either high or low impedance?

Active gear meaning pretty much anything that has a power supply. I can’t speak for older synths, but I don’t see any reason why they would have high output impedance.

So you have an output source, a cable, and an input. Can any of these 3 be either high or low impedance?

I dunno if this helps but…

TOTALLY NAKED guitar pickups are stupidly HI Z (or HI Impedance ) devices… the second we push THAT signal into a guitar pedal or DI that problem is nullified by the box, as the pedal is designed to take a guitar INPUT OR another pedal OUTPUT @ Lo Z…

SO… if you go into/out of an fx pedal, you are ALSO efffectively in the safe zone.

Not an expert at all, just looked this up:

"Impedance (Z) is the measure of the total opposition to current flow in an alternating current circuit. It is made up of the sum of two components, resistance ® and reactance (X).

Think of this as having a nozzle at the end of a garden hose. The garden hose is a low impedance source (there is little resistance to the flow of water) and the nozzle is the higher impedance of the input being fed by the hose."

This is accurate. The only major thing it’s missing is that Hi-Z inputs are much more sensitive to interference hitting the cable. So you want the input impedance to be significantly higher than the output impedance, but you don’t want it so high that you start getting interference.

This is why guitars are notoriously prone to interference. Hi-Z output run directly to a cable into a super Hi-Z input.

Will it? Don’t you mean the DI input circuitry will unbalance it?

Not really, most passive DI boxes have an input jack that effectively just shunts the ‘ring’ to ground, so whether its impedance balanced input on TRS or just a regular guitar cable, the effect is the same on the way into the box.

Well I’m pretty sure that’s what I said i.e. it’s the box not the cable that unbalances the signal.