Hey Boz, I was wondering if there’s any way you might considering adding a parallel processing workflow feature to ProVocative.

Right now some people are using the BlueCat Patchwork plugin chainer to create parallel chains that can be managed from within a single DAW insert slot. Others do like Warren here, duplicate tracks, pitch shift them, then pan them. I set up the parallel chains fed from a complicated system of auxiliary busses, but no one has really made an attempt to create a multi-stage doubling program that is easy to use.

I was wondering how hard it would be to implement a + button embedded in the plugin that would create a redundant instance of the main plugin directly a on the plugin. This would create the same functionality as the Waves Doubler but be much easier to setup, (Because Provoc manages the panned and inverted opposite imaged signal simultaneously).

You would still maintain a huge advantage over the Waves Doubler 4 because it can be managed as if it was a multi-band doubler and the doubled frequency ranges don’t require a separate instance of an EQ. Here’s an illustration/example of what I was thinking signal flow wise. Its not really possible to implement this in a series chain. It has to be parallel. 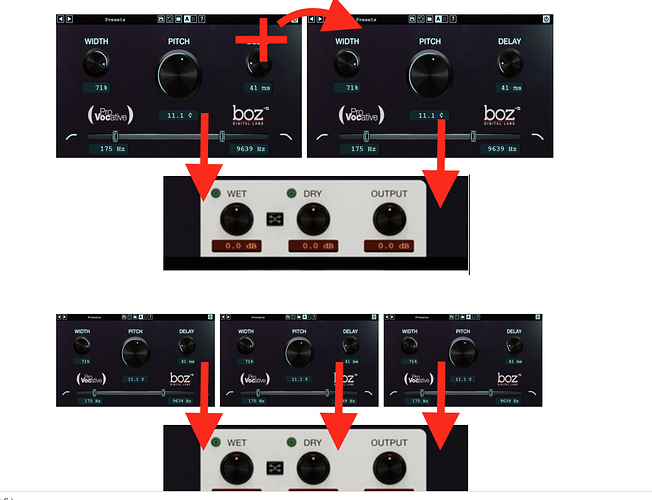 Is there any conceivable possible way this could happen?

I considered adding the option to do more voices. I had a prototype of a version that let you choose between 1, 2, 4 or 8 voices. I ended up erring on the side of simple because it solved the 95% case and was easier to use.

It would actually be really interesting to make it so you can run a whole bunch of the plugin in series, and have a “combine” plugin that sticks them all together as if they were on separate buses. In theory, this would actually be really easy to do, and super handy. In practice, I don’t think most DAWs would let you get away with it (obligatory “it would work perfectly well in reaper” comment goes here).

The simplest way to do this, off the top of my head, would be to send the wet output to channels 3-4 of the plugin, and the dry output to channels 1-2. Then the summing plugin can take channels 3-4 and fold them back into 1-2. Again, it reaper this would be trivial to do. But I don’t think a DAW like Pro Tools would let you just change the number of output channels a plugin has without making the user go through all sorts of junk to set it up.

If you take a quick look at that Warren Huart vocal thickening video, they need to run in parallel to get the effect. But not having to throw filters infront of them is pretty huge. Also, being able o throw a drive after them would really help. I was playing around with it last night. I like how it sounds. I ended up keeping the delay on 10ms for the most part and the pitch on 1 cent. When I set it up 2 of them in parallel it had a really nice effect… I put the width knob hard left on one and hard right on the other. Then I played with the frequencies to make the left double slightly different than the right. I did the Pensado trick where you have the second at double the Delay time as the first. Then I fed both of them from the same channel strip and put some saturation after it.