Heads up folks, Mr. Boz has released Big Clipper for an intro price of only $29! You get an additional $10 off if you “upgrade” from Little Clipper which he recently released. 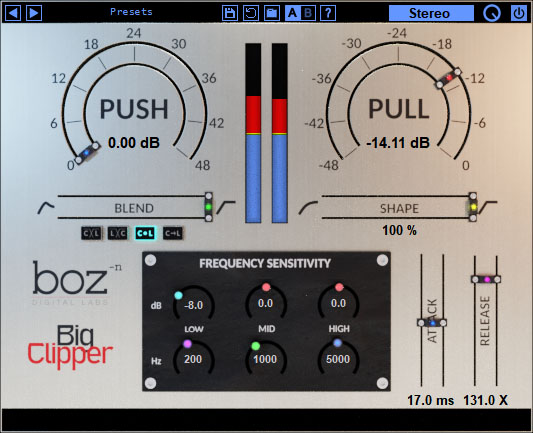 Boz, I bought this a few hours ago…For some reason its not showing up in Pro Tools. Does the AAX version work on your rig?

Worked in Logic right away though…

Nope. Never mind. For anyone who may have a trouble with this in PT…restart your machine and you’re good to go.

You may want to consider labeling this…I instinctively looked for it. But I would have thought this was a stereo imaging control had the scribble strip at the bottom not told me otherwise.

I also wish this had a volume attenuator built in…no big deal though. 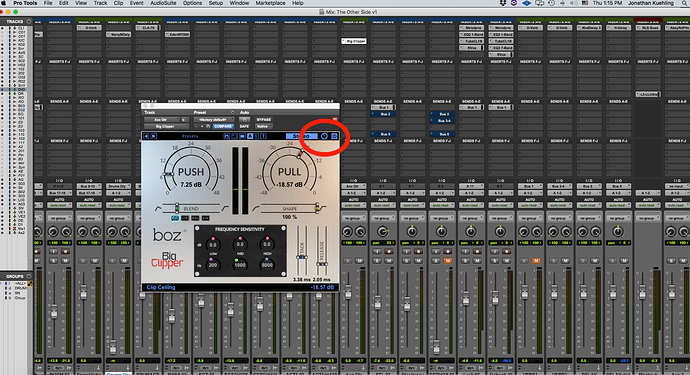 I’ve already had a couple people ask where the mix knob is. I guess I’ll have to label it.

Nope. Never mind. For anyone who may have a trouble with this in PT…restart your machine and you’re good to go.

You had to reboot to get it to show up in PT? What version of OSX do you have? I know this is an issue in Logic in High Sierra, but I haven’t seen anyone have the issue in PT.

El Capitan. I have to wait for Avid to update their Eucon engine before moving to High Sierra. I did check my plugins folder and the .aax file was there… I figured I’d try rebooting because that solves a lot of problems. It seems to have worked.

I’m wondering about combining Clipping/Limiting, specifically in the “Series” mode. Don’t each of these processes keep the signal from going over a specified threshold? (Assuming a 100% Wet signal, so no Dry signal is going through.)

Essentially, it’s like running a limiter, and then clipping the portion of the
attack that goes over the threshold.

It seems like you would do something like Clip at -3dB, then Limit (reduce) the clipped signal some more, say to -5dB. Or vice versa.

On another note, nice job on the documentation. Friendly, easy to read and good explanations. One very minor thing - under the “Main Controls” heading, “Push” section, “the” is repeated. You could find it by searching for “the the”. No big deal.

You can put a slower attack on the limiter, which will cause junk to pop up over the threshold. You can use the serial mode in a couple of ways:

But if you have the limiter set to 0ms attack, adjusting the blend slider does absolutely nothing.

I liked the video…

That makes sense, that the signal can exceed the threshold before it is pulled back down and limited. So is the 0ms attack like a “Brickwall limiter” then? i.e. Nothing gets through?

After having used this thing all morning, I’ve got to say its really interesting! Functionally it feels like a cross between the Fab-filter Saturn, the Waves Smack Attack, but it works so differently. I just used this thing on a rough mix for about 5 hours, and I’m still wrapping my around who different it is from most other plugins. It seems most similar to a multi-band distortion plugin but it functions as if it were a transient designer, but in reality its neither.

I think that multi-band feature at the bottom was just simply brilliant. And the ability to re-arrange the chain makes it stupid versatile! So really it provides a workflow and a coloring palette or enhancements that I don’t think you can get anywhere else. Very cool.

After hearing what you did with that guitar track, I added Big Clipper to the ukulele tracks on my last mix here. I think it really shines towards the end of the song once the guitar drops out and the doubled uke tracks start. It really brought out the tone nicely!

Mixing Practice: Turn On Me by Banned From The Zoo Bash This Recording

And the “final” mix. This one includes Jon-Jon’s link for phase cancelling of the cymbals. Used on the snare top and Tom 2 mics to minimize the cymbals in my P-Drum bus. (I’ve been meaning to try that for a while now. Neat trick!) Also did his kick-ducking side-chain - thanks for that one JJ. Then it was time to play with my new plugins: I added the new Boz Big Clipper to the Ukulele track(s) - I doubled it for the flute section when the guitar drops out - and then added SoundToys EchoBoy Jr. to the Uke tracks during the Flute solo for some extra texture. Time to stick a fork in this one an…

PS. BTW Boz, there are no links to your tutorials on your website…

PS. BTW Boz, there are no links to your tutorials on your website…

BTW Boz, the Big Clipper video was really good. The musical example was excellent IMO, really showed what the plugin could do. Your ‘performance’ was pretty good too.

Oh, there it is! I totally missed that “Education” tab, and I looked too. I found the video through YouTube. Thanks!

Yeah, I need to change the name of the tab. I think “Tutorials” would be more obvious. I just did a complete site redesign a few weeks ago, so there’s still a lot of construction debris hanging around.

I ordered my copy today.