A continuation of the topic

**Introduction to Acoustic Engineering** Greetings, my name is Andrew and I will be your guide as we cruise through the basics of Acoustic Engineering. My approach in explaining the topics will be in an informal question and answer format. My knowledge in Acoustics stems from my background in Heavy Electrical Engineering. Which means, aside from designing your quiet air conditioners, I can also design rocket engines, jet engines and power plants. Acoustics is a significant part of jet engine design, the noise of a jet engine is at hazard levels and if sound is not properly abs…

The blaring question - Is Diffusion necessary?

There is some debate around diffusion; some say diffusion is a must and some say it is a luxury and not needed in most cases. While there is some ambiguity surrounding the issue and that has to do with confusion between diffusion and scattering, there is no doubt that diffusion is indeed a very effective and proven way to liven up a room without losing accuracy . Diffusion was first effectively demonstrated by a German physicist Manfred R. Schroeder.

Diffusion can be used alongside absorption to treat reflective rooms but without removing too much sound energy; result is a more diffusive and lively room over a drier or dead room. Diffusion allows high frequencies to remain in space longer compared to absorption. If the room is overtreated with absorption, too many high frequencies could get absorbed, resulting in a dead, boomy and dry room. Diffusion can also help minimize flutter echoes in smaller rooms. In theory a room needs a combination of both, diffusion and absorption.

Difference between Diffusion and Scattering is often under misunderstood. Diffusion and Scattering are remotely related (as in they both involve use of reflective surfaces) but they are also conceptually very different. Diffusion is the process by which sound intensity and sound pressure is eviscerated evenly. In other words diffusion is a controlled capture and re-release of sound energy. Diffusion operates on principles of Phase shift and Boundary interference (we discussed earlier) causing waves in different phases from adjacent point sources to mingle and create a normalized spread of sound pressure over an area. This is also known as Huygen’s principle of diffusion.

The same principle is also used by concert array based PA systems, where speakers are stacked on top of each other or to the side. The Array of speakers is able to control the sound energy released as in, they are able to diffuse sound energy evenly in the concert hall by creating managed phase shifts between speakers.

Scattering, like diffusion also results in a spread of sound energy, however it operates on principles of reflection from hard surfaces as opposed to temporal phase shifting in diffusion. In scattering there is no phase change as sound waves do not change phases after reflection from hard surfaces. Scattering is a result of such reflections from flat angled surfaces and may also include diffractions from edges. While both methods, diffusion and scattering spread energy around, the key difference is that in scattering, sound just bounces off in different directions with similar intensity without any phase changes, as opposed to diffusion where there is an actual redistribution and re-release of sound pressure as a direct result of phase cancellations.

Scattering relies on inverse square law for reflections to diminish over time. Scattering can be unpredictable in many cases, and may also create unpredictable room modes if scattering surfaces are large enough. Diffusion on the other hand has a controlled and predictable response.

Scattering in other words can be seen as stronger (shinier) and diffusion can be seen as softer (warmer). While both have their own purposes, some products can do both, scattering and diffusion simultaneously.
Scattering is used in situations where more shine and sparkle are needed on the high ends, for example tracking rooms can benefit greatly from controlled scattering. Diffusion is used where environment needs to be more softer, controlled and predictable, for example mixing control rooms, home theatres and other listening rooms.
Diffusion can be used in both tracking rooms and mixing rooms, however strong scattering solutions are not recommended for mixing rooms.

Basic QRD Diffuser
In the scope of this article, we will discuss a type of diffuser called the Quadratic Residue Diffuser (QRD Diffuser originally developed by Robert Schroeder) also commonly known as a quadratic diffuser.

We have established that diffusion operates on phase changes, so how exactly does a QRD Diffuser do that? Lets find out! 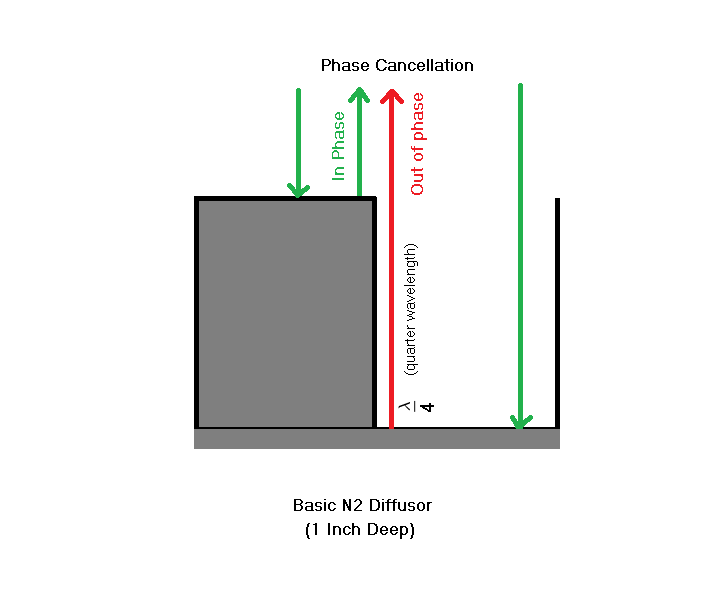 How big does a diffuser have to be?
Due to size restrictions, diffusers usually target low-mids to mid-high frequency spectrums. To diffuse low frequencies, the diffuser itself would have to be very large as low frequencies have very long wavelengths.
If an obstacle is not around the size of the wavelength of sound at a particular frequency, sound wave would act like as if the obstacle wasn’t there, as in, it would reflect back from the wall ignoring the 3 dimensional geometry of the diffuser. The diffuser has to be at least as large as the wavelength of its lowest target frequency. To target really high frequencies, the geometrical elements on the diffuser would have to be very small, borderline microscopic sizes and narrow region acoustics would take effect. Narrow region acoustics is another big area of discussion. In most cases a diffuser is a few feet wide and a few inches deep.

How does a diffuser work?
Diffuser relies on hollow cavities (wells) to create a phase shift. When sound of certain frequencies enter these wells, they get reflected back with a delay (a temporal phase shift) and when they mix with the signal that is in phase (as the one reflected from the top of the solid strip or from a different depth) it creates a phase cancellation scenario. When these 2 adjacent waves fronts come out of a point source (i.e. a slit like opening), the phase cancellation creates a new pressure distribution (a wider, combined disc like 180 degree spread as speculated by the Huygen’s principle).

Each point source on the previous wavefront (wavelets) becomes source of another wavefront in that direction.The result is that the sound feels evenly dispersed in all directions in the nearby area.

So what is so important about reflections from the quarter wavelength marker? When a wave reflects back from a quarter wavelength distance, it has travelled exactly 180 degrees (90 degree round trip!), as in it is delayed and temporally out of phase by 180 degrees when compared to the non reflected wave. The comparison is important because the wave itself does not change phase upon reflection compared to itself, but when compared to another non delayed wave, it is 180 degrees out of phase (as in exactly opposite waveforms). When these 2 waves mingle, they are out of phase by 180 degrees causing a complete phase cancellation (a null). While for waves to be completely out of phase is the extreme case scenario that usually defines the lower and upper limits of operations of the diffuser, partial phase cancellation still occurs for other frequencies in the operating range of the diffuser.

Now that we understand the operating principle of a well diffuser, let us find out how we calculate these depths. The depths of the wells of a QRD Diffuser is calculated from a symmetric quadratic function proposed by Schroeder.

Where x is the position of the well from left to right starting from 0.
N is a prime number
% is the remainder operator (or mod)

The calculation itself is quite basic, divide x square by a prime number and the remainder (hence the name Quadratic Residue) left is the depth, however, the beauty of the function is in the choice of the function itself. Choice of this function by Schroeder makes perfect sense, it gives a scalable and symmetrical pattern on the X axis and it gives results that are very close to the wavelength of frequencies that human ear is sensitive to.

Since we are striving for symmetry here, as in the symmetry of diffusion that leads to a symmetrical dispersion of sound energy, this function is very apt and yet very simple.

As you can see that the sequence is quite predictable and symmetric, 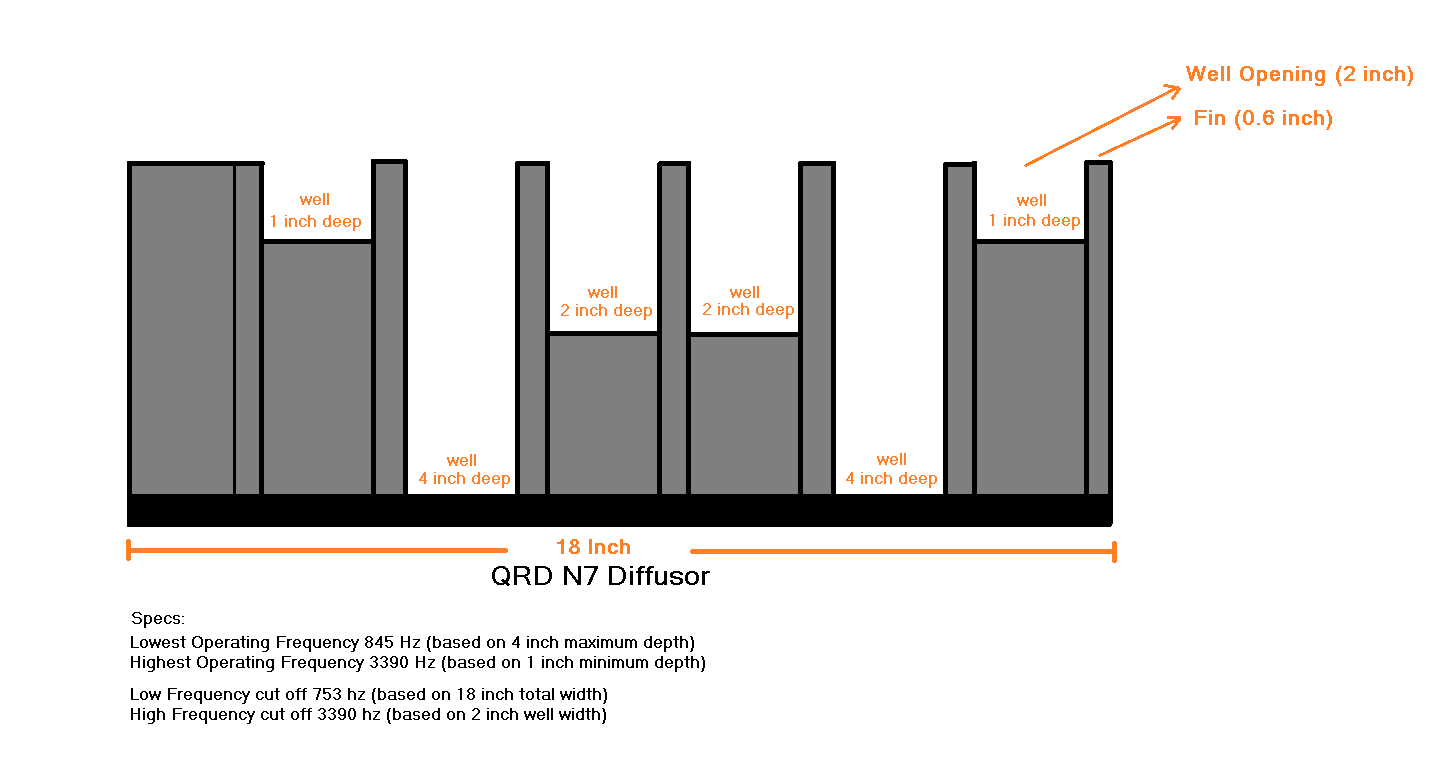 The deepest well (in our case 4 inches) dictates the lowest operating frequency that it can diffuse. Applying the quarter wavelength rule, that would mean a wavelength of 16 inches (1.33 ft) total. Dividing the speed of sound by 1.33 we get 845 Hz. Which means that the diffuser will work on frequencies above 845 Hz

The shallowest well (in our case 1 inch) dictates the highest operating frequency that it can diffuse.
Applying the quarter wavelength rule again, we get 3390 Hz.

The total width and height (not shown in cross section above) dictates the low cut off frequency of the diffuser. Since our diffuser is 18” wide by 18” tall, it should be able to catch frequencies that are shorter than the wavelength of 18 inches (1.5 feet). In this case that would be 1130 divided by 1.5, that is 753 hz. It is important that this number is less than or equal to the lowest operating frequency of the diffuser because if the diffuser is not big enough, it might not be able to trap the low operating frequency which would defeat its purpose.

The width of the well in our case 2 inches dictates what is the highest frequency that can get inside the wells and not get absorbed. Usually narrower openings are better but this number is a tricky one because if it is too narrow then narrow region acoustics kick in and signal will get absorbed or attenuated (converted to heat via viscous drag). In that case it will act like an absorber for high frequencies which is not good for a diffuser.
Narrow region acoustics is yet another large area of discussion, specially relevant in jet engine design and other heavy electrical designs. The width of the opening is usually half the wavelength of the highest operating frequency but can be engineered to be narrower with special care for reasons explained above.

If the width of the well is too wide then frequencies will not exhibit Huygen’s phenomenon of diffusion, as wave sources have to be adjacent “point sources (narrow openings or slits)” for the diffuser to work correctly. Too wide and frequencies would just reflect back without much effect.

That is most of the fundamentals of diffusion, the diffusers are designed to be scalable, as in they can be connected extended and used in either dimensions, horizontal or vertical. They can also be connected with other larger more complex diffusers as in N23 QRD Skyline diffuser etc. Overall diffusion is a good solution eliminate some acoustic problems in mixing rooms without absorbing too much sound energy.

Note: I will upload an official blueprint of the QRD N7 later, but feel free to use the images in this article to design your own, it is not very hard. I have constructed several of these myself and they work beautifully.