Just wanting to double check on this…I didn’t feel particularly compelled to respond on the UAD site, but I did want to know for myself.

…this forum reads bottom to top. 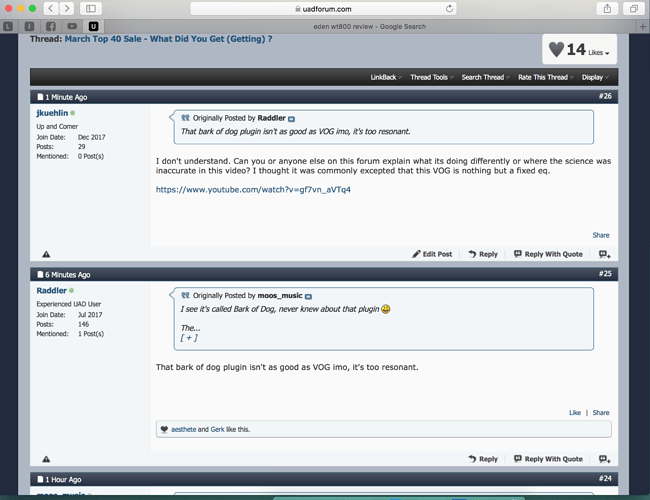 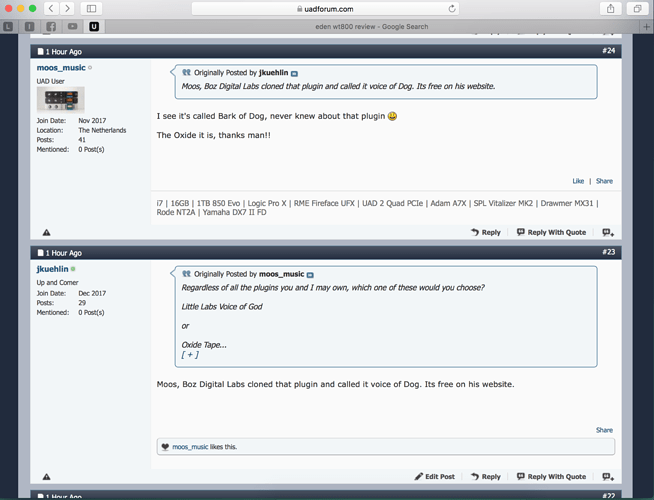 Trust me, this is not a taboo topic over there. There is plenty of conversation over there around UAD alternatives that are identical or cheaper.

I never looked at the original hardware nor the plugin when I made bark of dog. Brandon did confirm that the resonance shape was the same curve as any standard resonant high pass filter, so if there are differences in the resonance, it could be that BoD has a different range then VoG.

BoD doesn’t attempt to model any of the distortions that may be in VoG, although one of VoG’s main marketing points is it’s low noise and distortion.

BoD doesn’t attempt to model any of the distortions that may be in VoG, although one of VoG’s main marketing points is it’s low noise and distortion.

And while I’m at it, I just saw a Pensado video where he was talking about LF and HP filters being difficult to build and having some complex math. Is this still true or maybe something that plugin devs have gotten a pretty good handle on in the recent years?

Pensado video where he was talking about LF and HP filters being difficult to build and having some complex math.

I don’t think I can comment on that without seeing it in context. I do vaguely remember seeing the video you are talking about, but I don’t remember specifically what he was talking about when it comes to difficulty in making a HP/LP filter. My guess (again, not seeing the context) is that he was referring to some of the negative side effects of steep filters.

Do you have a link to the video?

They didn’t cancel completely, but then again, he didn’t try that hard either. It cancelled enough for me to be able to say “oh, that is a resonant high pass filter, and I always thought they weren’t useful.”

I made the plugin more as a way to spread the word that putting a little resonance on your HPF can make it much more useful. Whether you use BoD or any other EQ that has this option is up to you.

Gotchya! I didn’t understand that part. Thanks.

I just found this video the other day on youtube.
Warren Huart seems to like the Bark Of Dog.

I should mention, I have a version 2 of Bark of Dog coming out at some point. I have the prototype done, I just need to put graphics to it. Version 2 will have 2 modes: Classic and Pultec (although the pultec name will be different for trademark purposes). Classic mode is the same as it is in the original, with a slight change in the taper of the knobs. Same sound though.

In pultec mode, it will be like simultaneously adjusting the boost and attenuation of a pultec, but in a single knob. I actually like it a lot.