Alan mixed this one recently and I liked it so much I had to give it a try. Its from the Cambridge-MT site and written by Wesley Morgan.

Interesting choices with the panning. I like it you have got a good mix going here. I might be tempted to push the vocal into a compressor and bring it up a little, but i think i might be wrong. Thanks for sharing. Now i am thinking maybe i should grab this one and give it a whirl.

Thanks Eric! Yep, I went very light on the compression. This was a fun one to mix, you should go for it!

Mike, lovin’ what you did here. The balance and tone of the instruments is sweet. Lovin’ your eq.

Only comment is that the vocal is too quiet when it comes in at 2:17. Doesn’t stand out as much as it does in the rest of the song. It recovers nicely by 2:44. Just boost it a touch for that 15 seconds or so, and it’s perfect. I love how up front the vocals are. Curious what you used for reverb. It’s quite nice.

@Tesgin - Good comment Tesgin. I’m hearing that quieter section too. As for the reverb, typically, I have a 1/4 Note delay on the main vocal mixed way back to add some space in addition to verb. On this one though, I think I didn’t even add reverb on the track itself, but used my “room” verb to varying (very tiny) degrees on each of “final” busses - drums, bass, music and vocals. I’ll let you know exactly what I did when I fire up my DAW to fix the quiet section. thanks for the listen!

I put a revision in the first post. Basically I turned up the vocal section Tesgin mentioned and tried to highlight the piano part a little more.

@Tesgin - My recollection in the previous post was correct, except that the “room reverb” on this one is Melda’s MTurboReverb.

Thanks for bringing that up. Sounds really good. Makes a big difference.

However when you brought it up I think I noticed something in the vocals: it sounds to me like from that point on his vocals are more bassy/muddy than in the beginning. There’s more going on with the band and I have a hunch he was kissing the mic more? Maybe lose of a little if the low end on the vocals there?

Maybe I’m wrong but tell me what you think. In any event, nice, nice mix. I really like your eq on the band and on the vox. Very three dimensional. Love how in your face the vocals are. Again, really nice mix, Mike.

I wonder if it was an overdub or something? Because that section was definitely lower than the rest, so he may have sung it slightly different or stood closer to the mic or something. I found a video of a live studio recording of this song, and he’s definitely right on top of the mic!

Anyway, thanks for the kind words and the very detailed listen!

I took a listen to this last night in my studio. Sounds great!

About the only thing I would suggest is putting some more space behind the vocal. With the vocal so up-front and warm, and with such a tangible roomy sound on the instruments, I keep craving just a hint of room slap from the vocal to really put me in the moment.

Maybe the old 166ms tape delay trick - perhaps even a stereo version of that… or maybe a real dirty room pre-delayed to the point of “back wall” slap.

That’s a great idea Andrew. I agree, I think it will fit perfectly. I’ve even got a dedicated “Slap” FX channel in my template. I have no idea why I didn’t try that out on this vocal! Thanks for the listen.

About the only thing I would suggest is putting some more space behind the vocal.

Andrew, could you explain more how you’re doing this? Not that there’s anything wrong with your explanation (made perfect sense to Mike!), but it’s just over my head.

I’d love to know how to do this but don’t follow.

Anything you could do to help an eager student would be thankful appreciated.

About the only thing I would suggest is putting some more space behind the vocal.

Andrew, could you explain more how you’re doing this? Not that there’s anything wrong with your explanation (made perfect sense to Mike!), but it’s just over my head.

I’d love to know how to do this but don’t follow.

Anything you could do to help an eager student would be thankful appreciated.

When you have someone singing or talking close to you in a room, there is usually a reflection that “bounces” off the boundaries in the room. Even though their direct sound might be right up close and “in your face”, there is still a delayed reflection from the walls of the room - how long the interval between the source and the reflected sound is depends on how far the walls are from the sound source. Since sound travels (very roughly) around 1ft per ms, a “slap” type delay of 100-200ms suggests a fairly decent size room. Another factor to keep in mind is that reflected sound tends to lose top end.

These two factors relate to the famed “slapback” delay sound of early rock’n’roll recordings, because IIRC they were achieved by using the space between record and playback heads on early tape machines. Apparently that fixed space equated to 166ms, which rather serendipitously worked to achieve that characteristic “slap” delay, combined with the fact that the regenerated delay sound lost top end due to tape degradation and distortion. The result was a sound that imitated a sizeable room with sound “slapping back” off the walls, creating excitement, movement and space, without “washing out” the sound in reverb.

To give a real world example of the type of sound I’m describing, take a listen to the following - in particular, the second (higher pitched) vocalist:

A similar, but perhaps more smooth effect can be created by delaying the onset of a fairly short reverb by a similar amount of time.

I hope that explains it.

Bahaha! What a bunch of nerds!

Andrew, you should be a freakin’ professor!

So, let me see if I’m following how you do this.

I’m thinking the key pieces to pulling this off would be, then:

Am I getting it?

I’m thinking ReaEQ and ReaVerb would pull this off nicely.

I’m also seeing this would be a breeze with H-Reverb.

Can you suggest specific or typical settings for the above?

@Tesgin - FWIW, this is what’s on my Slapback FX channel. I pulled up one of the presets then twiddled the knobs until I liked the results.

Thanks for the suggestion Andrew!

PS. Hey Andrew, I’ve been mixing Bitter and you put together a beautiful package of well-organized and well-done multitracks! Thanks for sharing them with us.

I’m thinking the key pieces to pulling this off would be, then:

Am I getting it?

I’m thinking ReaEQ and ReaVerb would pull this off nicely.

I’m also seeing this would be a breeze with H-Reverb.

Can you suggest specific or typical settings for the above?

I’m not suggesting you do these all together - try them as alternatives to each other at first, then mix and match them to taste. Ambience is complex, so mixing things up can give you a really individual result.

Here are some screen shots of H-Delay & H-Reverb being used in these roles.
Here is dry vocal from the competition song (it’s a live track, so the bleed makes it a bit messy) :

…and the screen shot of the plugin settings: 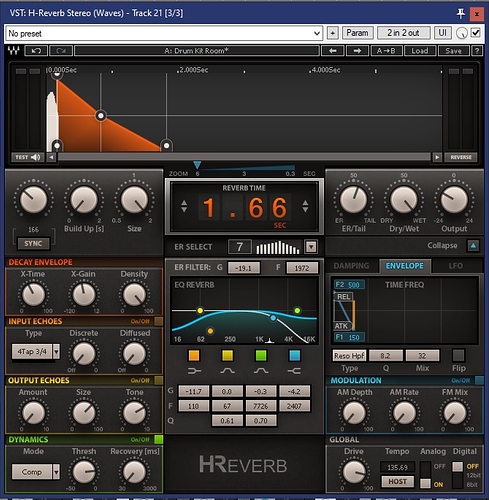 Thanks for posting those. I didn’t try your reverb trick, but I kind of like that one! I also shortened up my delay time on my slapback thinking I liked it better, but now I’m second guessing that decision…

I’m curious if I did this right? 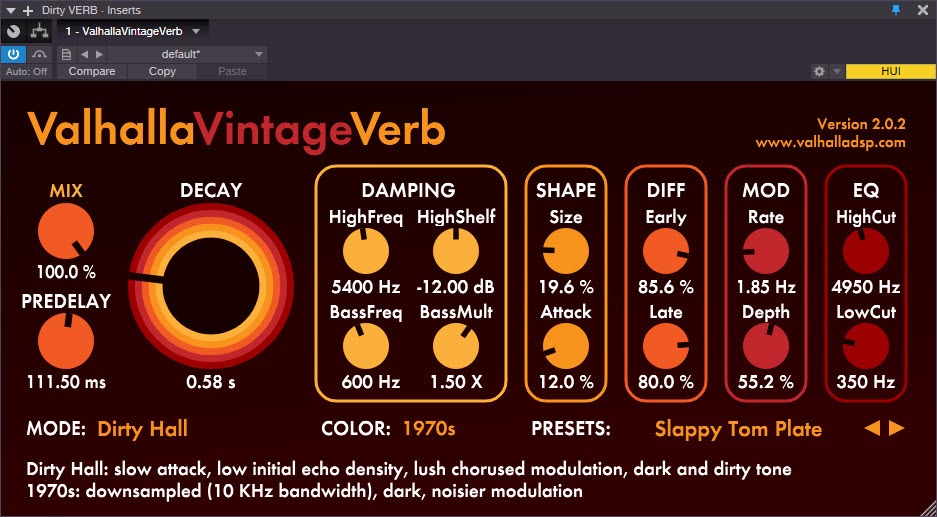 Yup - love it!.. both cool in their own way! Personally I prefer the echo-boy version, but it might be cool to highlight certain phrases and words by automating the reverb to taste.