I was just offered a used MOTU 896 (circa 2005). I currently use e Roland Octa-Capture. I have read a few reviews and it looks like the MOTU, even in its first version, would be an upgrade for me. Do you guys have an opinion on this? Also, do you think there is any chance I can get the MOTU to run on Windows 10? And is it strictly firewire or USB too?

Hey, from what I read, 896 is strictly Firewire and as far as I remember, Firewire is deprecated (but still supported) by Windows 10.
“Hybrid” version are Firewire and USB compatible but I can’t find if it works fine on your OS.
I think you could use this “new” piece of gear as preamp (Mic to line level) or as A/N converter (thru ADAT).

I hope it could help

Thanks. Well that’s kind of what I was worried about. I do have a Focusrite ISA Two so I don’t really need another preamp. Is the MOTU 896 still worth anything on the second-hand market? I might as well sell both interfaces and buy a newer one, more suitable to my gear and needs.

I went to the MOTU website and they have Windows 8 drivers for the 896, so there is a chance the software would install on Windows 10. 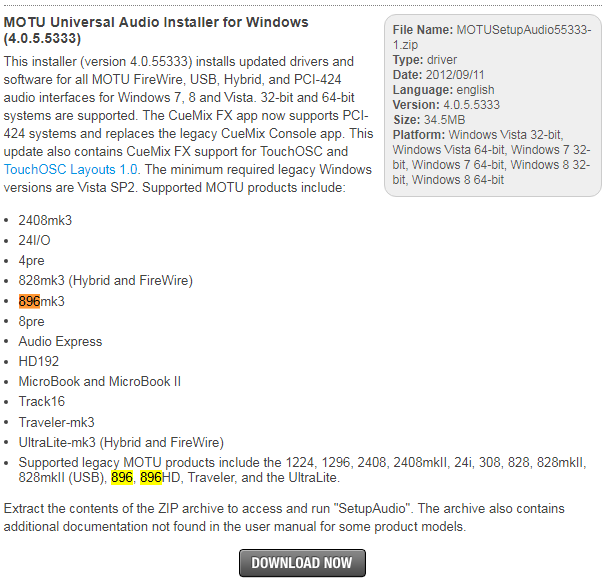 Yes I went there too but the driver is for the mk3 which is a lot newer, the one I’ll get is the very first version that was released in the early 2000s.

I still use my firewire interface with win10 no problems.

Hmm, so the question is: do you really need it? (regarding what you got and what you’ll get)
On the features/support/… side, Focusrite 18i20 (1st generation) can be an option: 8 analog I/O, ADAT IO, quite low price as 2nd hand, pretty decent audio performances and good support both on drivers and sofwares.

I would take the opportunity to try it out.

You can’t really tell how something sounds and how it is to use it by reading the specs.

Give it a try

Is the MOTU 896 still worth anything on the second-hand market?

Yes! An interface with word clock is ALWAYS worth something on the used market. These can be very handy as digital patch bays and format converters. People use them to expand I/O, then aggregate them into larger networks. They’re also usable as playback monitoring devices in smaller editing rooms. I use a 1st generation 2408 to pass AES, TDIF, and light pipe back and forth between my MADI converters. Basically if it can accept master clock, its usable!

Ok well noted guys, thanks for your input.

It is september 2017, I would not go into Firewire anymore

Nothing wrong with firewire, I prefer it over USB.

Long as you have a PCI/PCIe slot to put an adapter in.

That interface is at the end of it’s life anyway but it’s pretty decent.

Did you end up giving it a shot? Just curious

Nope, I don’t have a firewire port handy.