Anyone record multiple amps at the same time?

Just wondering if any of you record multiple amps at the same time? I usually just do a lot of takes through different amps and sims and layer and layer it but I’m wondering if I’d be better off getting a splitter box and recording 2 amps at a time than doing so many separate takes, like maybe it would be less messy sounding overall? What do you guys do?

Hey there,
For a standard rock track, i use 2 x guitar tracks L/R (2 performances) Also cutting back the distortion for recording as it will kill the attack.
Also sometimes introduce another 2 tracks of guitar making 4 tracks (4 x performances) for a chorus perhaps, (cut back too distortion on guitars, maybe a different amp and or guitar). Then some cut some EQ from low end in one set and make some alternative eq settings. Greenday are classic for this. I doubt id use more then four tracks unless its a mono track adding some spice here and there or a lead track. I use Axe FX so i’m not micing up amps, but same principles apply.

The key though is separate performances and cut back the gain.

You won’t get the deviation for the stereo image. Must be separate takes.

I have had ZERO success making sims work without lag. BUT, if I could Id consider a splitter type setup where the Di guitar signal is recorded onto a track while at the same time it splits off and goes into the main amp which is also recorded. That way you have your nice amp sound but then you have the DI as a backup which you can then sit and play with to your hearts delight

My main setup has generally been close to what Soundcandy described. I would setup 2 sounds that were pretty close to each other but also different. Maybe one sound would be the rhythm channel of the amp with a distortion pedal and maybe the other sound would be the lead ch of the amp. One will be a track panned left and the other panned right and then they also end up with different eq’s etc.

Then I basically just flip back and forth between those sounds as I build the song. Its generally just straight doubled but also sometimes I throw in some variations between tracks like hit an A chord in one channel but an Asus2 in the other channel

As stated above, using 2 amps wont really be giving you a stereo vibe. Same as using 2 mics on one amp wont give u a stereo sound but will give u more mixing options

Just wondering if any of you record multiple amps at the same time? I usually just do a lot of takes through different amps and sims and layer and layer it but I’m wondering if I’d be better off getting a splitter box and recording 2 amps at a time than doing so many separate takes, like maybe it would be less messy sounding overall? What do you guys do?

Multiple amps, through different combinations of cabs, sometimes using a 2, 3, or 4 way splitter to feed them simultaneously, sometimes with different mics or combinations of mics on each cab. And change up the guitar too, if not something like rolling back the volume and coil tapping a pickup. Sometimes the purpose is width, sometimes its density.

Even when you have several amps layered up, I overdub anyway. So for example, you could have a Matchless, Badcat, Marshall blend happening on the left side, with a Fender, Budda, DrZ blend going right as a second take.

Another approach is what @SoundCandy said. One primary amp, the others color the primary. So if the Matchless is the main amp, but its lacking crunch, pull the Budda, mids all the way up, lows fully attenuated. Highs adjusted as needed. Or say you love the clarity and punch in a wall of sound from a JCM2000 but it lacks sparkle and chime. Then toss an a Vox, Divided by, or 65 amps unit to add what its missing.

Here’s another trick. Remember that very few amps actually cut or boost. Most of these, you’re opening and closing a HP/LP filter. Others, your tone controls cut in different ranges. But they do not boost. So when you’re changing the dial on the mids, all you’re doing is sweeping around with a one band equalizer in a limited range below zero. Some amps have presence knobs which can be high shelf.

There were old interviews with Malmsteen where he was saying he recorded 2 amps at once but I dont remember the exact setup. I think the idea was one very bright and one pretty warm

Thanks guys, lots of helpful suggestions here. To clarify though, I’d still be doing multiple takes for the stereo effect. But as it is now I usually do several takes with one amp, panned left and right, changing settings or moving the Mic between each LR pair of takes. Then I do the same with my other amp, and then I might do the same with some layers of sims. Also I’ll do extra layers for the choruses. So I end up playing the part a shitload of times for most rhythm tracks, which is probably not helping the clarity of the guitar track any. Splitting would at least cut down on some of that I’m thinking.

If you’re gonna multi-take anyway, then yes, I would certainly record the multiple amps all at once.

This thing is amazing.

Feed 6 amps simultaneously with no signal degradation. Or reamp form your DAW into 6 different amps.

I leave about 10 amps set up with mics parked infront of all of the cabs. Then I blend them and sum them on the mixer before committing them to the DAW.

That way you can solo, mute, and change panning arrangements on the mixer before sending them to the DAW. Just make sure you don’t have phasing issues, because if you have commit a phasing issue to track, you’re screwed.

I’m getting away from using sims. The scuffham are the best of the bunch, but they are SOOOOO limited.

10 amps at once!?! I gotta say that is pretty awesome! Sounds like a badass setup. I’ve only got two amps a Marshall dsl and a mesa single rectifier, so I don’t need to split it that many times lol.

10 amps at once!?! I gotta say that is pretty awesome! Sounds like a badass setup. I’ve only got two amps a Marshall dsl and a mesa single rectifier, so I don’t need to split it that many times lol.

Yeah…but I’m not playing them all at once haha! You’re sort of picking and choosing what goes where for whatever track. So they’re in the room, everything routed, and the lines are run, and you have a bunch of options to pick from at any given time.

A Marshall DSL and a Mesa Single rec, I’d run an ABY splitter into both of them, separate mics, on a 2 separate cabs, then overdub. I would probably get a good mono blend, then move one take left, one take center, one take right…you get the idea. There’s quite a bit you can do as soon as that second amp is in the picture.

Yeah that’s what I think I’m gonna do, get an aby splitter. I’ve split the signal to two amps before with a boss chorus pedal, but I don’t like boss pedals in front of any kind of drive from a pedal or amp, the buffer seems to mess with the sound in a bad way. You should totally play through all 10 at the same time at least once though just because it’s awesome.

Just for shits and giggles!!!

I was thinking I could have done all of them in 2 passes, but then I realized since they’re at full volume, the bleed and phase issues would have been brutal!!!

Ps…that Behringer is a piece of shit. Don’t ever buy one. I don’t care if it looks pretty. Stay away.

…both the Vox and Dr Z were treated unfairly in this video!!!

The bugera you mean? It doesn’t sound bad at all in the videos, I’m actually kinda surprised it sounds as good as it does, especially next to those other amps. I have heard they are unreliable garbage amps that break though. I probably shouldn’t buy any more amps but if I do it will probably be an AC15c1. Cool videos thanks!

I probably shouldn’t buy any more amps but if I do it will probably be an AC15c1. Cool videos thanks!

Yes! That C1 can be a very nice amp with a couple mods.

I got mine really really super close to my other British AC15. Except for the wood that the cabinet was made out of, I think I have it spot on. You can tell a difference when playing it, but its minimal in a mix. Its close enough to where I can run the two in stereo and they match pretty nicely.

Here ya go man. This isn’t my rig, but its the general idea. I don’t have quite this many dynamounts, but my cab collection is a little more diverse than this one. I would never use that Vox cab…and I think he fourth mesa cab is redundant, since the 3rd one runs in stereo. I also like to keep an assortment of open back 2x12’s handy.

Wow. I took a quick look at that Dustin Bennett dude’s room. He’s got a nice spot. This guy looks like he does a LOT of heavy rock stuff. But yeah, here’s the general idea of how I use the JD7. 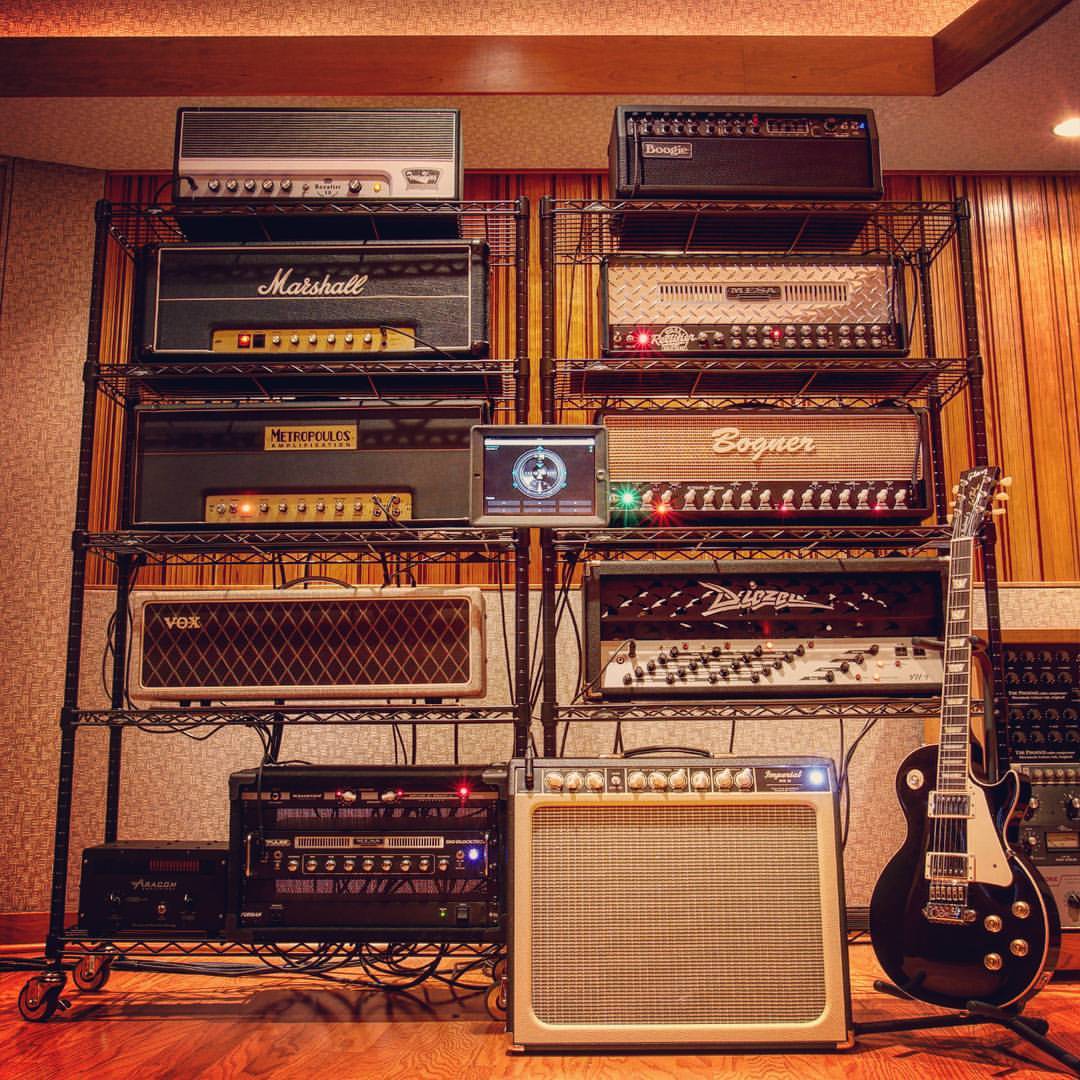 Man…those ugly ass shelves would drive me nuts lol. But they work. And I think it was smart to keep them on rolling carts.

Ps…does anyone recognize that amp in the upper left hand corner?

I do sometimes, I do it nowadays by reamping thru two different amps.
Back in the day I used a 5150 and a Plexi together. The Plexi had that spanky bright that cuts thru anything and the 5150 just layered on the brutal distortion, so in the end you have brutal distortion and definition at the same time.
Now I use small amps sometimes miked in tandem, Orange Tiny Terror or Mesa Mini Rectifier sometimes layered with Marshall Class5, pretty much the same idea as before but I do it now via reamping cause I am lazy.

I also find the combination between bright and dark really appealing, as in Mesa vs Marshall type of sounds.

Also crunch mixed in about 20% vs full on distorted amp at about 80% of the overall guitar tone is really appealing, with liberal application of eq as well. My main issue nowadays is that I can’t keep my settings without someone bumping around the house into a mic or an amp, when I have an amp locker in a studio this was a lot easier to do, so now I record and then spend a day or two reamping when everything is finished from production standpoint.

I also find the combination between bright and dark really appealing, as in Mesa vs Marshall type of sounds.