Anyone here use an API 2500 as a group bus compressor?

Was curious if people had thoughts on this thing… 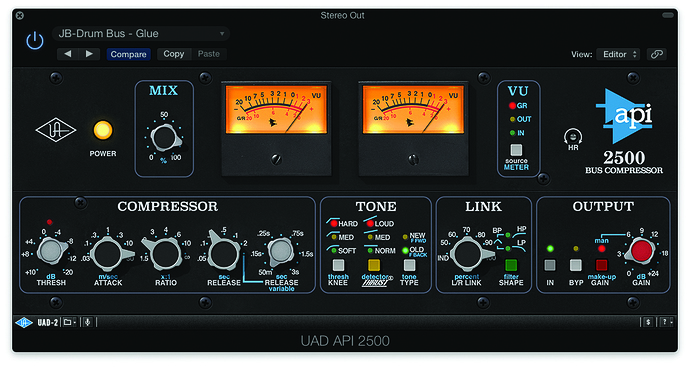 …on groups of anything.

I just got the UAD version a week ago. I’ve been experimenting pretty heavily with it, and I like what it does. I was never crazy about the Waves one, even though Warren Huart says he likes the Waves better than the UAD and the hardware version. Isn’t there a pretty broad consensus that these are good for just about everything?

Anyone here have any thoughts or experience good or bad with this guy?

I have no direct experience with an actual hardware model, but I have both the Waves and the UAD version. I’m with you, I like the way the UAD glues material. As far as using it on the bus, I don’t see why not. I haven’t tried it, but it wouldn’t hurt to test it. I’d set the attack at a medium level and the release to be pretty quick.

The reason I like the UAD on the busses is the its real relaxed. It doesn’t dig real hard. I like the Vari Mu and the Shadow Hills for this stuff too, but that UAD is working real good right now.

What other UAD stuff do you have?

I just bought the Waves version a few weeks ago, and I’ve been experimenting with it lately. One cool thing I’ve used it for is this function that I discovered on this video about Mix Buss processing. Bob Horn uses it on his master buss in a very interesting way: From about 27:28 on.

Nice comp ,There is something I really like about the waves dbx 160 on busses, has a mix knob too.