Another 1-take "campfire style" guitar & vocal: Long As I Can See the Light

Hey folks, here’s another quick video I recorded last night playing one of my favorite songs, the Creedence classic Long As I Can See the Light, offered in hope during the pandemic.

The sound is a blend of the cellphone audio (Samsung Galaxy S10+) with a track recorded simultaneously with my AT4040 condenser. The two tracks are panned at 50% to either side. The only other processing is a bit of EQ and a reverb send. So there’s not a lot of adjustment that can be done, and the goal here isn’t sonic perfection anyway.

That said, as always, any and all input welcome, and as always, thanks for listening (and watching in this case). 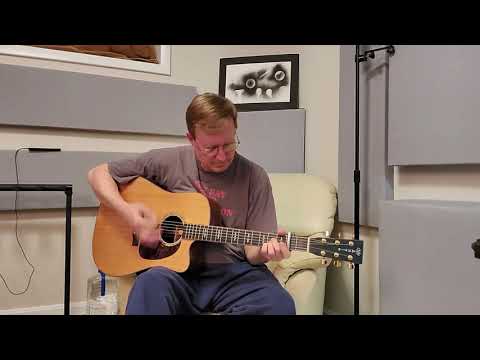 Man, I forgot how much I liked this song. Love the way you slowed it down. The acoustic is awesome. Holy cow. Just enough to get a percussion feel. Vocal is spot on. It would be fun to check your bpm’s at the start and then again at the end, because I don’t think you varied at all. I hope this inspires others to get their mugs in here. Thanks Dave

Thank you gents! I appreciate your taking the time to check it out. And yeah, what a toweringly great composition… I do love this tune.

Jeez! This is really good!

I’m not sure if I’ve ever heard this song before but I really enjoyed your performance. Very professional. Your timing was excellent and you showed good dynamics. The sound is very good too! I wasn’t expecting the sound to be that good. This is a solid video performance.

As Paul (Feaker) said, “I hope this inspires others to get their mugs in here”. It definitely inspires me, but I don’t know if I’m brave enough to do it. I’m even a bit shy to post my music in Bash This Recording.

Ok, so how can you be “wicked” and shy at the same time? ha ha I couldn’t help myself. Maybe a couple of beers to inspire? I am sure after Dave put that together, and then viewed it, he was himself surprised how well it turned out. I agree that the sound should not be that good. I challenge you to maybe just a short piece. If you do, I will, but will not have that good of a sound. So what. You get a chance to see the real folks on this forum in their element. There are many I would like to hear/ SEE

I am sure after Dave put that together, and then viewed it, he was himself surprised how well it turned out.

True that! It did come out better than expected. And I’ll be very honest-- it was after reading Andrew’s encouraging words about my first one, the Dry River tune, that prompted me to get up from the computer, head down to the studio and lay that down. No planning, just went for it. I did have a couple beers in me though.

Sound settings are identical between the two-- I just copied the project file I made for Dry River and replaced the tracks with the ones from this session. The only change was some slight level adjustments between the cellphone audio track and the AT4040, because the mic was not sitting in precisely the same spot as the first time. So as I do more of these (and I will be), I have a template ready to go.

I really appreciate the support and encouragement, especially these days.

This is one of the many, many great songs John Fogerty penned during a hellaciously prolific period between late 1968 and early 1970. Creedence released three albums in 1969: Bayou Country on 5 January, Green River on 3 August, and Willy and the Poor Boys on 2 November. Amazeballs. Then they released two more in '70: Cosmo’s Factory on 25 July, and Pendulum on 7 December, by which time the band was starting to come apart. This tune is the closer for Cosmo’s Factory.

I would argue that no rock act ever put out so much great music in so short a time, and they ruled the world during that stretch, outselling the Beatles even. Fogerty is one of my absolute top musical heroes.

Thanks for your kind words!

Love it! I wasn’t sure how it would sound (given it’s hard to pull off a CCR song when you know you’re going to be compared to John, but this was awesome. Love your take on it! Great balance and guitar sound too.

Hey Dan, great to hear from you! And thanks for your kind words. Yeah, audacious to cover the great Fogerty, but my love of the song and its current relevance overcame the reluctance. Oh, and the couple of beers I had in me.

You’re welcome. I’m a trying (again) to make a return to the forum in a more regular way. Since having to teach from home during lockdown, I’ve started to re-evaluate how I use my time and make sure I get music to fit more. Ironically, since moving and becoming a music teacher, I have less time for music. Go figure. Anyway, I finally finished an EP that took me 3.5 years and I’ll be getting it out shortly, and it’s made me want to keep that ball rolling and also check out what others are doing and give back a little again.

Back to your clip, can I ask why you kept the cell phone audio in? I mean, I can’t tell if you did or didn’t, but I’m curious to know if you noticed something that it added by happy accident, intentional or you couldn’t avoid it.

That is some irony indeed! But good for you for being intentional about your music life, working and otherwise. Looking forward to hearing your EP!!

It does sound a bit better with using both audio tracks, panned as I have them. This is my second one of these, having done a cover of Dave Alvin’s Dry River a few weeks ago, and the recording setup is the same, combo of the phone’s audio and the single AT4040 offscreen to the right (my left). It’s easy to omit the phone audio: When I drop the video into Mixcraft, it automatically splits the audio into its own track. I think I get a better sense of space from the two sources being recorded from those separate locations, and honestly, the cell audio quality doesn’t suck at all.

My goal here also wasn’t to do a sonic masterpiece so much as just capture what I was feeling when playing the songs. So the post-processing is minimal, and I think it fairly captures what it would be like to be sitting there in the room while I did the tunes.

You can check out Dry River here if ya want: 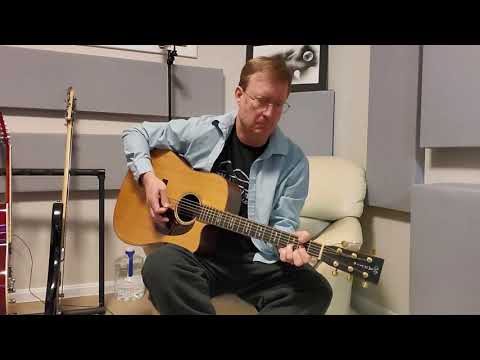 I think you’ve achieved the perfect balance. It doesn’t sound raw and rough, it sounds balanced and clean. If processing is minimal then I would say that has a large amount to do with your performance more than anything. Good stuff! Hopefully more to come.

I think it also has a lot to do with the GIK absorbers I have lining the walls in the studio too… really happy with how things sound in there! Thanks again Dan!

Nice playing and singing Dave! And in a way quite brave. It’s a lot easier to hide behind a complete production with drums, bass, guitars etc. This is sort of pretty naked. But I like that. Some of the best concerts I visited (or parts of them) were just the singer his guitar and his song. If you can pull that off in a huge hall (I’m reminded of the last Paul Simon tour) you are truly one of the greats.
I keep on telling myself I should start by recording nothing but a naked version of my songs but always end up layering guitars, adding a bass, and hey, why not adding some drums, and the rest…
I feel that recording a song all the way from beginning to end is strangely challenging, whereas I do it often enough without much hesitation on stage.
Anyway a few years ago I did something similar but using only my phone. Drawback is that you hear the Martin a lot louder than my voice, but that’s OK. The song’s title is “When the levee breaks” but it has little to do with the Led Zep song (except the title). I wrote it as a reaction to Katrina flooding most of New Orleans. I live in a country that would suffer far greater effects if certain levees break (at least hundreds of thousands of certain deaths) and I work for the organization that’s responsible for preventing this from happening, so Katrina really hit me. I consider it as one of my best songs, but I’m refraining from recording it hoping to become a little better at recording/ mixing before I do

. I’ll put up the link in a separate thread.

This is an excellent cover.

I think the guitar sounds great. I would have loved for a mic to be a bit closer to your voice. Is it far so that it doesn’t show up in the video?

I bet you could get it closer without it being in the shot if you put it overhead.

Hey, thanks Boz – indeed, I placed the mic so it wouldn’t be in the shot, it’s just off screen stage left. It’s an AT4040, so definitely OK for recording voice, although I usually use my Vienna MK3 for vox. Maybe I’ll try the overhead positioning next time and see how it goes.

I know that the point is to not have massive setup, so take this for what it’s worth. I’ve found that a way to get a mic off camera while still sounding like it’s close is to use a lav mic and another mic off camera.